Wait, you're endorsing whom?

Election Image of the Day: With Jagmeet Singh looking on—and the cameras rolling—two prominent First Nations chiefs made it known they won't be backing his candidate 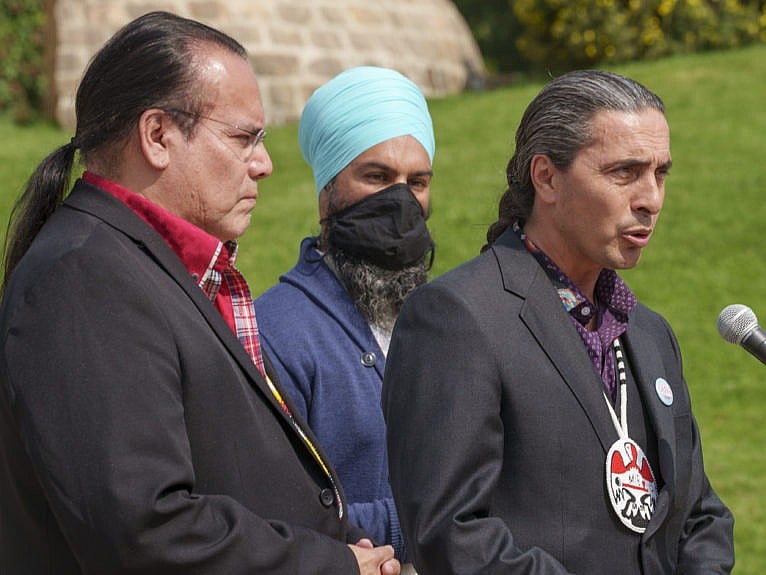 On a sunny Thursday morning NDP press conference in Winnipeg, standing feet from Jagmeet Singh, Grand Chief Arlen Dumas of the Assembly of Manitoba Chiefs offered the media a glowing endorsement: “I think that it’s time for a fresh start in the North, and I absolutely support Shirley Robinson in her candidacy.” The only problem? Robinson is a Liberal. Earlier in the press conference, Singh blasted the Liberals for not doing enough on reconciliation, not respecting treaty rights and not delivering results after hundreds of unmarked graves were found on the grounds of former residential schools in the past few months. But when the other chief in attendance, Grand Chief Garrison Settee of the Manitoba Keewatinowi Okimakanak, was asked point-blank by whether he was supporting Niki Ashton, the prominent New Democrat who’s held the Churchill riding since 2011, he said, “No.” Both chiefs were complimentary to Singh. But both said they firmly believe Parliament needs more Indigenous voices. Ashton is not Indigenous; Shirley Robinson is. Their determination to put First Nations identity before partisanship, Dumas added, is inspired by provincial MLA Elijah Harper‘s decision in 1990 to break with his party, the Manitoba NDP, and stand against the Meech Lake Accord. Still, their words on Thursday made for an awkward moment that took a few days to register in the national media. In retrospect, it seems a good thing that Singh wore a large black mask to the event. Underneath, his mouth must’ve been hanging open in dismay.