338Canada: The odds are against Trump, but they're not as bad as you might think

Philippe J. Fournier: Polls have Joe Biden ahead of Trump, but as with Clinton in 2016, how the 'toss up' states eventually swing is what matters 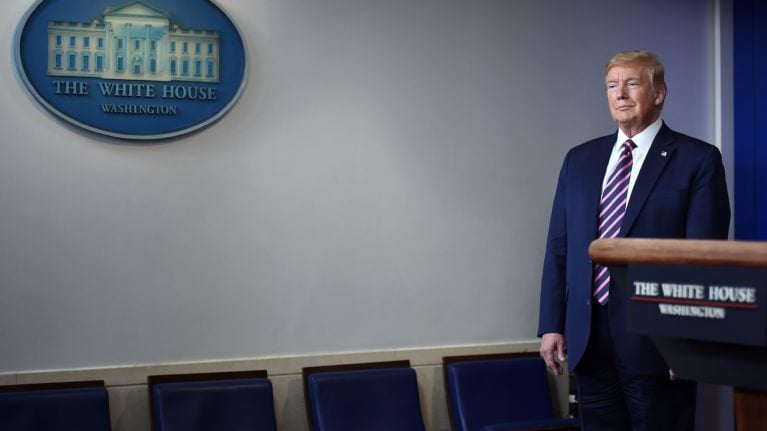 Trump looks on during the daily briefing on the coronavirus at the White House on April 24, 2020 (OLIVIER DOULIERY/AFP via Getty Images)

I had made the final table against all odds, but was the low stack in the remaining group. The croupier dealt the cards. I slid them closer and took a peek: 7-6 of hearts. Not necessarily a strong hand, but I nonetheless called the big blind. My three opponents called. Then came the flop: Queen, Ten, Three, rainbow. I checked.

All opponents also checked, meaning either nobody had anything above a low pair, or somebody in the group was slow playing (maybe two pairs, or even a set?). The croupier dealt the fourth card on the board (called “the turn”): Five, which gave me an inside straight draw (3, _, 5, 6, 7). That’s a real sucker’s bet if there ever was one: Long odds to complete the straight with nowhere else to go with a couple of low cards and useless suiters.

Feeling my opponents were probably not that strong and that I had to get this pot to survive, I went all in.

It was a stupid, miscalculated bet; one I regretted the second the croupier began counting my chips. The tournament had already lasted more than five hours and it was wearing down on me. Still, it was the kind of reckless move I had avoided all tournament long, which was precisely what had gotten me that far. Although I was trying my best to hide it, my facial traits and body language were probably screaming with shame and disappointment.

Then the first opponent called. The second called as well. The third folded. The croupier assembled the side pot. They were going to battle it out. I was ready to grab my coat and leave.

Then the final card (called “the river”): Four.

I had made the straight by catching two running cards in a row (“runner-runner”). I had no business even still being in this hand, but here I was.

I won the hand. Two opponents were decimated and eliminated shortly after. I eventually lost the head-to-head match. That last day of a long weekend in Las Vegas had been my most profitable, and I could thank lady luck for being on my side for that precise hand.

What are the odds of hitting a “runner-runner” inside straight? The answer may be surprising to some: on the turn, you need to hit one of eight possible cards: about 17 per cent. Then on the river, you need one of four cards: just under 9 per cent. Therefore, for both events to happen, the odds are about 1.5 per cent. Facing these odds, most players would have folded before the river is dealt, so actually winning a hand that way would only occur a fraction of that 1.5 per cent.

Obviously, in the context of poker, both events—the turn and the river—are not correlated, meaning whatever card comes up on the turn will not affect what the river card will be (except for the obvious fact that both cards cannot be the same).

In 2016, when some political analysts declared Donald Trump had over 95 per cent odds to lose the election to Hilary Clinton, they followed this flawed logic: Trump had to win Florida and North Carolina and Pennsylvania and most of the Midwest states. If we take these events as independent and non-correlated events, yes those long odds against Trump winning the Electoral College would have made sense. But national elections are not a series of uncorrelated events.

This is where precious demographic data comes into play: say about one per cent of voters with similar profiles in, for instance, North Carolina and Michigan swing one way, the change in the popular vote will remain within most polls’ margins of error, but the Electoral College will all tumble on the same side.

In 2016, the polling average had Trump and Clinton statistically tied in Florida; Trump won the sunshine state by one point. In North Carolina, polls had Trump leading by an average of one point over Clinton, and Trump won by 3.6 points. In Pennsylvania, Clinton held a thin two point lead in the aggregate, and Trump won by 0.7 points. These three states were actual toss ups, and, looking back, we cannot consider these cases as major polling failures.

However, the Midwest was another story. Whereas Clinton led the polls in Michigan by an average of four points the day before election day, Trump pulled off the victory by a mere 0.3 point. In Wisconsin, the polling miss was much greater: from an average lead of 6 points towards Clinton to a 0.7 point Trump victory.

All these states swinging the same way explains why the Trump odds of victory were underestimated by several political observers. And, in the five states mentioned above, only the Wisconsin (and to a lesser extent Michigan) polls were truly off the mark.

The point here is not whether the 2016 polls were accurate or not, but rather to remind readers that it was first and foremost the interpretation of the polls that was way off the mark. Nate Silver’s FiveThirtyEight was far more realistic, with Clinton as a 70/30 favourite over Trump. Still, is that a sure thing? Absolutely not. Throw a dice: numbers one through four, Clinton wins; Five or six, Trump wins.

It was, from a purely statistical point of view, not that stunning that Trump could pull it off. Trump’s win was not the “runner-runner” inside straight so many still believe it was today, but a moderate upset against an opponent that turned out to be weaker than expected. Much like a below average team like the Montreal Canadiens beating the Washington Capitals twice in D.C. last season. It is unlikely, but it happens.

Which leads us to 2020. We are six months away from voting day in the United States and virtually all national polls show Joe Biden leading Trump in the popular vote. See below the national polls since early April:

However, on a state by state basis, the picture is not as rosy for Joe Biden. He is currently leading where he needs to be leading to win, but the margins in several swing states are barely better than those that had Clinton in the lead:

Here is the breakdown of states considered safe, likely, leaning and toss ups for both parties:

In the toss up row, we find the usual suspects from 2016: Michigan, Wisconsin, Pennsylvania, Florida and North Carolina. Trump and Biden splitting these states is not an improbable scenario (in which case, Biden would win), but again how these states will ultimately swing will most likely be correlated. Therefore, as far as the available data goes for now, anything can happen.

The U.S. Presidential 338Canada model currently has Biden as a 2-to-1 favourite, similar to the odds of Clinton winning the presidency in 2016 according to FiveThirtyEight:

We will follow the polls and analyze the trends throughout 2020 and all the way to the November 3rd Presidential election. You may access to all the U.S. numbers on the 338Canada page.