A respite for the U.S. Capitol. But how long will it last?

Image of the Week: After last week's riots and renewed threats of violence around Joe Biden's inauguration, these soldiers must not be caught napping 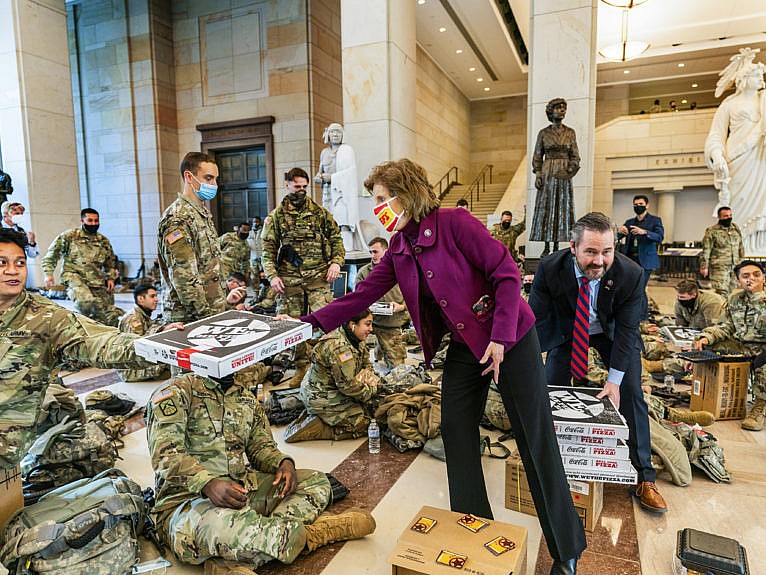 Rep. Vicky Hartzler, R-Mo., and Rep. Michael Waltz, R-Fla., hand pizzas to members of the National Guard gathered at the Capitol on Wednesday as the House debated the second impeachment of Donald Trump. (Manuel Balce Ceneta/AP/CP)

This is it—this is what the coda of the Donald Trump presidency looks like. The final chapter concludes with twin occupations of the U.S. Capitol: last week’s mob of marauding Donald Trump supporters, which delayed the confirmation of a new president; and this week’s arrival of 10,000 National Guard soldiers, whose aim is to ensure the impeachment vote on the old president and the inauguration of the new one both go ahead safely. These men and women are camping out in the halls of governance, sleeping alongside American icons, paintings and statues. By Jan. 20, when Joe Biden is sworn in, the soldiers’ numbers could swell to 20,000. Democrats have raced to impeach Trump, for a second time, before that date—if not to remove him from office early or bar him from running again, then simply to send a message: democracy must be protected. Trump’s supporters wanted to send a message, too—one of anger, paranoia, fear and perceived ownership over their country. This is not the end of that ideological battle over the soul of the United States. Nor is this the first time the National Guard has slept in the Capitol to protect it. The last time, ominously, was during the American Civil War. This may be the final chapter of Donald Trump’s presidency. Let’s hope it’s not the prologue to a whole new book.