Accept it, this is America now

Shannon Gormley: Where the United States is today—in the midst of every waking nightmare anyone has ever had about a President Donald Trump 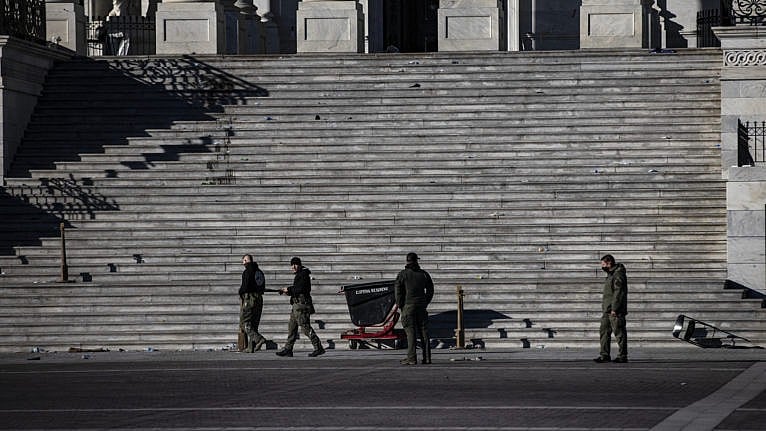 Police officers survey the damage and debris left on the Eastern steps of the U.S. Capitol Building on Jan. 7, 2021 in Washington, DC (Samuel Corum/Getty Images)

The United States Capitol fell yesterday. In the gravest assault ever sustained by the oldest and most powerful democracy on earth, insurrectionists staged a violent coup attempt after the sitting president told them their country had been stolen and they had to take it back.

Members of the president’s fascist movement followed those orders by storming the legislative building just as Senate and House lawmakers inside prepared to confirm his rival’s victory in the recent election, the results of which so injured the failed authoritarian’s pride that for eight weeks he has launched a blitz of conspiracy theories and procedural obstructions at millions of votes even as the courts threw out all but one of his 62 bogus legal challenges.

Faced with an inconceivable unreality, the president-elect could offer a single bare fact as consolation. “This is the United States of America,” he said. He had to say it, because it cannot be. This is Turkey, Ethiopia, somewhere else? Where the hell is this? What the hell is this?

In and around the Capitol yesterday, this is precisely what it was: That afternoon, the president and his goons instructed their troll army to use force against their political opponents.

From the president himself: “You have to show strength and you have to be strong…Fight much harder,” he said.

From the president’s son: “Stand up and fight!” he said. “Actually fight,” he clarified. “We’re coming for you”—this, to his father’s rivals.

And from the president’s lawyer: “Let’s have trial by combat!”

That same afternoon, a minority group of legislators from the president’s party prepared to object to the election, an unprecedented betrayal of American voters that the objecting lawmakers defended as consistent with democracy on the grounds that they could get away with it—heartened by its presence, one lawmaker offered a fist pump of solidarity to a growing mob on the lawn.

By dinnertime, that mob had smashed through the entrance and marched Confederate flags through the halls, a piece of furniture had been pushed up against the doors of the House floor as a make-shift barricade, legislators had been hidden under chairs or evacuated, loved ones had been called and bid farewell, “MURDER THE MEDIA” had been scrawled across an exit, and one woman had been shot dead; by midnight, several of the objecting lawmakers had with a few notable exceptions decided they did not object to free and fair elections after all and, despite the continued best efforts of the lawmaker who did not wish to take back his earlier fist pump, the election was certified.

Meanwhile, articles of impeachment had been prepared, the president’s twitter account had been locked, the Secretary of Defense had called in the National Guard without the president’s participation, some cabinet members and staff had reportedly debated the removal of the president on the grounds of his mental unfitness for office, and the president had watched TV and told the violent seditionists that they were special and he loved them.

Having passed a fitful night, uncertain who would be in charge when it awoke, this is where America is today: In the midst of every waking nightmare anyone has ever had about a President Donald Trump, save the part about nuclear war, and there’s still time. In this nightmare, America’s storied democratic system and its legacy conservative party remain commandeered by a man who has been many things in his life—a perpetually bankrupt casino owner, a reality TV personality, an admitted sexual assailant—but never a democrat or a conservative, while virtually every facet of American democracy sits in crisis. The news: Featured some era-defining reporting, but Americans  now get most of their information from whatever their high school gym buddy posts on Facebook. The justice system: It beat back a coup attempt, but the office of the attorney general and the Supreme Court are now tainted by Trump appointees. Congress: Controlled by the non-fascist party, but just barely. Republicans: utterly and perhaps irredeemably corrupted.

That’s it. That’s where and what it is. The United States got there, got to be that, for many reasons: because a sociopathic rich guy with a knack for ad-libbing showed up exactly when America’s divisions between black and white and city and country and high brow and low brow had reached a fever pitch; because a critical mass of people are attracted to brute force; because the country of the Bill of Rights is also the country of PT Barnum, shoot-em-up Westerns and slavery, and in Trump those parts of America finally found themselves again. We can go return to arguing about which of these factors was more important in getting it there later.

What matters today is that officials and lawmakers accept that this is the United States: a country facing a fascist coup attempt. The best way to prevent the president from causing more injury to the office of the American presidency is to remove him from it—today—through impeachment or the 25th amendment. The best way to prevent him from causing future injury to American society is to remove him from that too—prosecutors should set in motion their plans to charge him with obstruction of justice, tax fraud, sexual assault or whatever else before he can leave the country or be pardoned.

“We do not encourage violence,” said one of the objecting lawmakers who very much encouraged violence by repeating the lie that the election was stolen.

“This is not who were are,” said one of the president’s children who very much is his father’s son.

“This is the United States of America,” said the president-elect who is very much correct.

The United States Capitol fell yesterday, and then it rose again, and now it had better come to grips with the fact that it can always fall once more, the next time along with everything else around it.