Americans will elect a woman. They just think they won't. 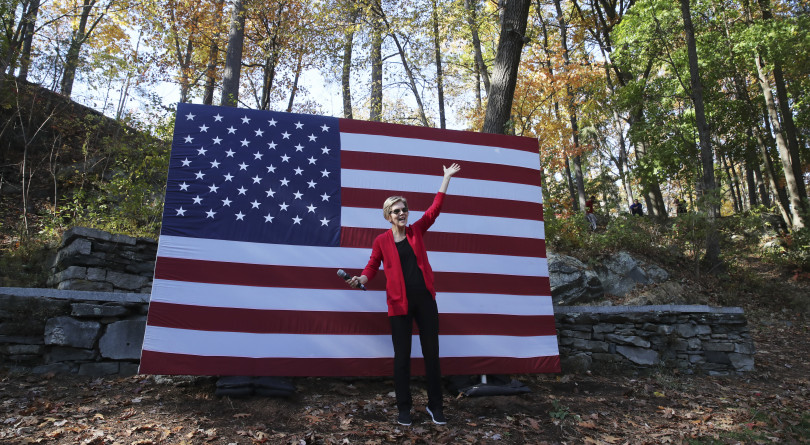 Of the original six female Democratic candidates, only Warren has a shot at being elected president (Craig F. Walker/The Boston Globe/Getty Images)

In November 2020, Americans are likely to elect the first-ever female to the highest ranks of public ofﬁce. The question is no longer when, but rather who—and to which position.

What is this prediction based on? To start, next year’s presidential election is looking like the Democrats’ to lose. Since his inauguration in January 2017, Donald Trump’s approval ratings have consistently hovered just above 40 per cent. That degree of unpopularity is unprecedented in American history. Several major elections since January 2017 conﬁrm the trend: voters swung to the left both in the 2018 mid-terms, where Democrats wrested control of Congress away from Republicans, and this past November’s gubernatorial elections in previously solid-red states Kentucky and Virginia. Heading into November 2020, Democrats have momentum on their side.

The most immediate question is who will be on their ticket. The answer, according to pundits and politicians, will include a woman. “It will be very hard for the Democratic party to justify an all-male ticket in 2020,” says Kelly Dittmar, an assistant professor of political science at Rutgers University who studies how women perform in American politics. Of the original six female Democratic candidates vying for the presidential nomination, only one—Senator Elizabeth Warren—has a good chance of winning. Her two closest competitors are former vice-president Joe Biden and Senator Bernie Sanders, both septuagenarian white men who have publicly stated they’d like a younger woman as their running mate. Among the mid-tier candidates polling below 10 per cent you’ll ﬁnd Cory Booker, who has also vowed to run alongside a woman. Senator Kamala Harris dropped out of the race on Dec. 3, but may be well poised as a second-in-command. (As a decidedly un-radical woman of colour whose pragmatism aligns with Joe Biden’s strategy, she’d be a strong sidekick, despite their run-ins with each other on the campaign trail.)

READ MORE: Elizabeth Warren, once at the back of the pack, is rallying like a contender

There are other women running for the Democratic nomination, of course, but none of them realistically stand a chance of ending up in the Oval Ofﬁce. The author Marianne Williamson has garnered an impressive base but hasn’t polled high enough to appear on the national debate stage since July. The Minnesotan centrist Amy Klobuchar could also end up as Biden’s running mate, while some believe the anti-mainstream military veteran Tulsi Gabbard, who was one of just seven members of Congress to endorse Sanders in 2016, is only sticking in the race to cozy up to the popular senator.

So with a Democratic ticket likely to include a woman, either for president or vice-president, the question becomes: How can party strategists make Americans comfortable with the idea of a female head of state?

So far, women have struggled in the ﬁeld. When Victoria Woodhull made history as the first woman to run for the presidency for the Equal Rights Party back in 1872, her opponents attacked her as a witch, prostitute and adulterer. (Her candidacy was considered such a fringe event that, allegedly, no one bothered to count the negligible number of votes she received.) It took another century for a woman to be nominated for a major American party: in 1984, Geraldine Ferraro ran as veep on Walter Mondale’s Democratic ticket, but the pair were demolished by an incumbent Ronald Reagan. Decades later, Sarah Palin followed a similar fate alongside John McCain against Barack Obama. It’s impossible to blame their losses on the fact they are women, but after Hillary Clinton’s failed 2016 campaign, one has to consider the issue of sexism seriously.

“When I first joined Hillary Clinton’s 2016 presidential campaign, I had a grave misconception about the task before us,” writes Jennifer Palmieri, Clinton’s director of communications, in Dear Madam President: An Open Letter to the Women Who Will Run the World. “Simply put, I didn’t think it mattered that Hillary Clinton was a woman. I just thought she was the best person for the job. I didn’t see all the complexities inherent in the task of electing the ﬁrst woman president.”

RELATED: How women candidates and voters turned the House on Trump

Those complexities led to incessant debates on how Clinton should address her womanhood. According to Amanda Renteria, Clinton’s national political director at the time and the current president of Emerge America, an organization that helps Democratic women run for ofﬁce, Clinton’s messaging team held several roundtable discussions with women’s groups to hear feedback on the issue. The consensus: “It’s not why to vote for her, but she’s also not going to run away from it,” Renteria says. This marked a stark distinction from Clinton’s campaign against Barack Obama in 2008, when her campaign adviser, Mark Penn, effectively instructed her to run as a gender-neutral candidate. (In a private memo from 2006, Penn wrote to Clinton that Americans viewed the president as a father figure and that voters “do not want someone who would be the ﬁrst mama,” but believed they would be “open to the first father being a woman.”)

By 2016, the political climate had changed; today, that climate has changed even more. Renteria notes that monumental moments in modern women’s rights, such as the galvanizing march in Washington and the fallout from major #MeToo stories, hadn’t even happened by 2016. But perhaps the biggest difference is the fact that women, especially among Democrats, have normalized themselves as powerful, electable American politicians. Just look at Nancy Pelosi, Alexandria Ocasio-Cortez and the Squad, and the groundbreaking 117 women elected to Congress in 2018, most of whom were Democrats. In 2016, there was internal pressure within the Democratic party to let Clinton win the nomination. “That pushed people to either not jump in or not take her on directly, because here was a moment to make history,” Renteria says. This year, that historic moment feels less forced. Nobody is making room for Elizabeth Warren—if she wins, it will be because of her campaign, not her gender.

Therein lies the key to a successful female candidate. “If we’re trying to minimize any potential for bias to play a role in [this upcoming] election, it means in part pushing back against the idea that women aren’t electable in the ﬁrst place,” Dittmar says. She points to the way Warren relies on her track record and platform to win over supporters, and to the 2018 mid-terms, when Democratic women won the majority of toss-up seats to secure a Democratic majority in Congress. “We can’t prove that their gender was necessarily a boost, but it certainly didn’t prevent them from winning,” Dittmar explains.

READ MORE: ‘You’ve got to hand it to Trump,’ and other quotes from Hillary Clinton’s book

And yet, even though a woman won the popular vote in 2016, many voters still have a hard time believing Americans will actually elect a female on the ticket—especially to the presidency. According to a recent survey of more than 1,800 registered voters by Avalanche Strategy, a political communications ﬁrm, the most important trait in the eventual Democratic nominee must be the candidate’s ability to beat Trump. In other words, even if average voters like Elizabeth Warren, they’re more likely to support Joe Biden if they feel he has a better chance of winning. On Nov. 4, the New York Times published the results of a poll it conducted with Siena College which showed that Warren would have trouble beating Trump.

“Those who see gender as a barrier to electability consistently express beliefs that other voters will not vote for a woman,” write the study’s authors. “These findings suggest that many voters may not need to be convinced that a female candidate is more capable—they must be convinced that Americans are capable of electing them.” Of those respondents who mentioned gender as a barrier to electability, 69 per cent were female.

In short, according to the study, most Americans are willing to vote for a female head of state—they just don’t think their neighbours will. Clinton herself hints at this in her post-election book, What Happened. “I didn’t want people to see me as the ‘woman candidate,’ which I find limiting, but rather as the best candidate whose experience as a woman in a male-dominated culture made her sharper, tougher, and more competent,” she writes. “But the biggest reason I shied away from embracing this narrative is that storytelling requires a receptive audience, and I’ve never felt like the American electorate was receptive to this one … That’s not who we are. Not yet.”

Much has changed, however, in the two years since Clinton wrote those words, including the view of her candidacy. At the time, Democrats, particularly Democratic women, saw it as a failure. But perhaps it was less a failure than a necessary sacrifice. When Democrats cleared the way for her in 2016, they created an important moment in history—just not the moment they had in mind. Because of Clinton, six women have now thrown their hats into the ring, and five have outlasted eight politically seasoned white men. All these women are being taken seriously and judged on their own merits. The crowd is hungry for a female on the ticket and the opportunity to avenge the losses of every female who preceded them. Next year, a woman will finally be elected. History is still being made.

This article appears in print in the January 2020 issue of Maclean’s magazine with the headline, “Not ‘unelectable’ after all.” Order a copy of the Year Ahead special issue here. Subscribe to the monthly print magazine here.