And how is Trump after an insane, surreal week? Couldn't be better. 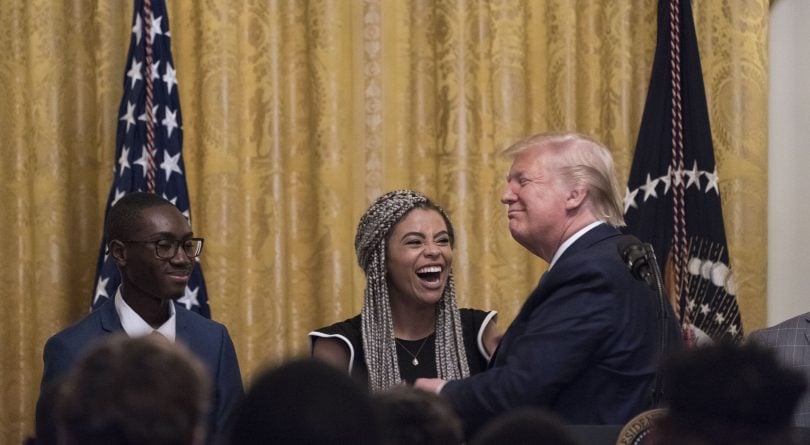 A lusty chant of “Four more years!” rattled the White House windows from the inside on Friday, but this was not the president of the United States thundering to an audience of one in the Clintons’ old shower.

A chorale of ecstatic voices shouted “We love you!” to the beleaguered chief executive, but they came not from the throats of Donald J. Trump’s current wife and his quintet of children, nor from Vice-President Mike Pence, though it may be that he truly does.

Meanwhile, a candidate for the presidency, well into his seventies and under enormous pressure as his poll numbers tumbled to new lows, suffered a heart attack and was rushed to the ICU for emergency surgery—but that wasn’t The Donald, either.

In fact, a stranger in the whitewashed mansion on the last afternoon of a hellish, perhaps politically fatal, week for the 45th president might have thought that he had slipped into an Inaugural Ball rather than a slough of impeachment, so sweet was the military band’s music from the Grand Foyer, and so joyful the crowing man with the unnatural hair.

Adding to the dizziness was the fact that nearly all of the people hooting and whooping and shouting out their adoration of Donald Trump were African-Americans in their twenties and thirties, dressed to party for the last political party you’d expect them to support in a fractured land allegedly on the verge—as the president re-tweeted the other day—of “civil war.”

….If the Democrats are successful in removing the President from office (which they will never be), it will cause a Civil War like fracture in this Nation from which our Country will never heal.” Pastor Robert Jeffress, @FoxNews

A CNN poll last week gave Mr. Trump the support of only three per cent of black women. If this is accurate, then all of them must have been in the East Room on Friday for the president’s valedictory to the Young Black Leadership Summit, cheering at the top of their lungs. While Sen. Bernie Sanders was being repaired in a Las Vegas hospital, and while Speaker Nancy Pelosi & Co. were delineating the precise parameters of Trump’s political auto-da-fé, the president got his groove back and rapped, coherently and otherwise, for a hour: defiant, combative, indestructible.

“What could the Democrats reveal that would make you turn on him?” the woman was asked.

“Could you please tell me your name?”

“It’s just a political impeachment,” a university student from Virginia agreed. “What I see are the record-low unemployment numbers and criminal-justice reform and the Democrats attacking him because he is so successful.”

“Could you please tell me your name?”

Of all the bizarre episodes of these manic past 10 days, the strangest may have been Donald Trump boasting of his popularity among Americans of colour while the Democrats plotted to Send Him Back to his gilded New York penthouse in disgrace.

AUDIENCE MEMBER:  We love you!

THE PRESIDENT: The radical Democrats are willing to do anything to smear anyone and to lie about everything in their craven quest for power and money.

Or it may have been Trump claiming at a news conference on Wednesday with the president of Finland that “I know that I’m right and because I’m doing a great job for the American people, I’m very, very happy living the way I’m living,” and  “You know, I—believe it or not, I watch my words very carefully.” And this came just one day before he tweeted that Speaker Pelosi and “Shifty” Adam Schiff were “wasting everyone’s time and energy on BULLSHIT.”

This is some of what occurred in Washington this week that wasn’t excremental:

What McConnell did not reveal is whether he would convene a formal trial, or table the matter within a few minutes and get back to making America great again.

RELATED: It’s almost like Donald Trump wants to be impeached

But Donald Trump doesn’t play the piano, he doesn’t drink alcohol, and—so far, at least while he is in public view and earshot—he does not seem eager to surrender.

Out in the heartland, meanwhile, Sen. Joni Ernst of Iowa—in a foretaste of the pressure that all Republican members soon will be feeling back home—was asked after a town hall meeting in the town of Templeton  “whether she was concerned about the president’s mental state.”

“I think I would probably be upset if someone was constantly on me like that, too,” she replied. “But I can only handle myself. I can’t control what the president does or doesn’t do.”

Asked by a constituent “whether it’s okay for the president to extort other countries,” the freshman, who is running for re-election in 2020, said “we’re going to move onto another question.”