And on the third convention day, Caitlyn Jenner rose

Allen Abel covers the third day of the Republican National Convention, where Caitlyn Jenner exposes the religious divisions in the right 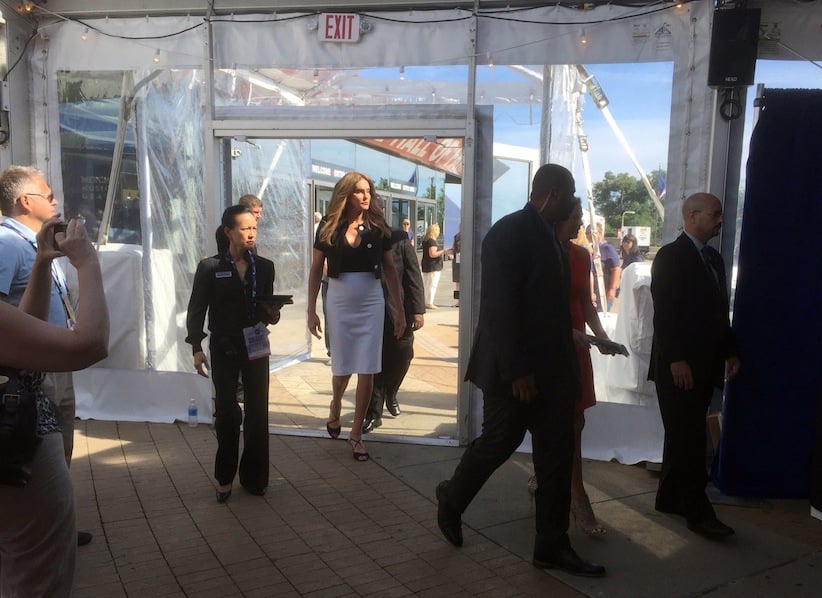 Caitlyn Jenner, center, arrives to speak at an American Unity Fund brunch at the Rock and Roll Hall of Fame in Cleveland on Wednesday, July 20, 2016, on the sidelines of the Republican National Convention. Jenner said it was easier to come out as transgender than it was as a Republican. The transgender activist and Olympic gold medalist was speaking at a breakfast at the Republican National Convention to promote LGBT inclusion in the GOP. (AP Photo/Josh Lederman)

Perhaps the most famous member of the Republican Party in the whole world—tremendous-er than Trump, bigger than Baio—strode onto the stage in a low-cut tee, a short-sleeved jacket, heels, and a little white skirt.

Hundreds of people from every frequency of the visible spectrum were brunching in a big white tent outside the Rock & Roll Hall of Fame, down on the Lake Erie shore. The event was billed as a call for mummified Republicans to wake up and smell the mascara in the men’s room—and at least to try to compete for the LGBT vote. But, like every other moment of her astonishing public metamorphosis, the morning turned out to be about one person—the eleventh event of Caitlyn Jenner’s lifelong decathlon.

“Am I really a Republican?” Jenner posed aloud. Then she told of her father, a Ranger in the Fifth Battalion of the United States Army, and how he had fought for his country on Omaha Beach in 1944, and how he had been buried at Arlington National Cemetery, and how, “if he had seen what happened in my life . . .” and Caitlyn Jenner began to cry.

Yes, she said, she was a Republican, though not the sort of Republican you see on the floor of the National Convention, all get-upped in red, white, and blue and brandishing 1 Corinthians 6:10 (“Do not be deceived: Neither the sexually immoral nor idolaters nor adulterers nor male prostitutes nor homosexual offenders nor thieves nor the greedy nor drunkards nor slanderers nor swindlers will inherit the kingdom of God”).

And, indeed, the official 2016 platform of the Republican Party doth specify that same-sex marriage be considered an unholy abomination and that transsexual people shalt not use any public washroom that does not correspond to their God-given genitalia.

Many in the audience were incensed by this retrograde splinter. Montel Williams, the talk-show host and ex-Marine (and ex-endorser of Ohio Gov. John Kasich for president), rose to furiously parry Corinthians with Galatians 3:38—”There is neither Jew nor Greek, there is neither bond nor free, there is neither male nor female: for ye are all one in Christ Jesus.” But there was no anger evident in Caitlyn Jenner this sunny day.

“If Donald Trump were here right now, what would you tell him?” the cynosure was asked.

“I would tell Donald that there are people who have been marginalized for years,” Caitlyn Jenner answered. “And we have to provide a safe environment for them.”

Some in the big white tent saw this as possible, thanks—yes, thanks—to Donald (“I’m Protestant. I’m Presbyterian. I’m proud of it. I’m very proud of it”) Trump.

“Trump can be the lightning bolt this party needs to release the stranglehold that the fringe-right social conservatives have had on this party for decades,” Gregory Angelo, president of the Log Cabin Republicans, told Maclean’s.

The New York billionaire, Angelo said, actually had attended a same-sex wedding. He had proclaimed that he didn’t care which bathroom Caitlyn Jenner used. And, lo, Caitlyn Jenner had gone into the ladies’ room at Trump Tower and nobody said a word. 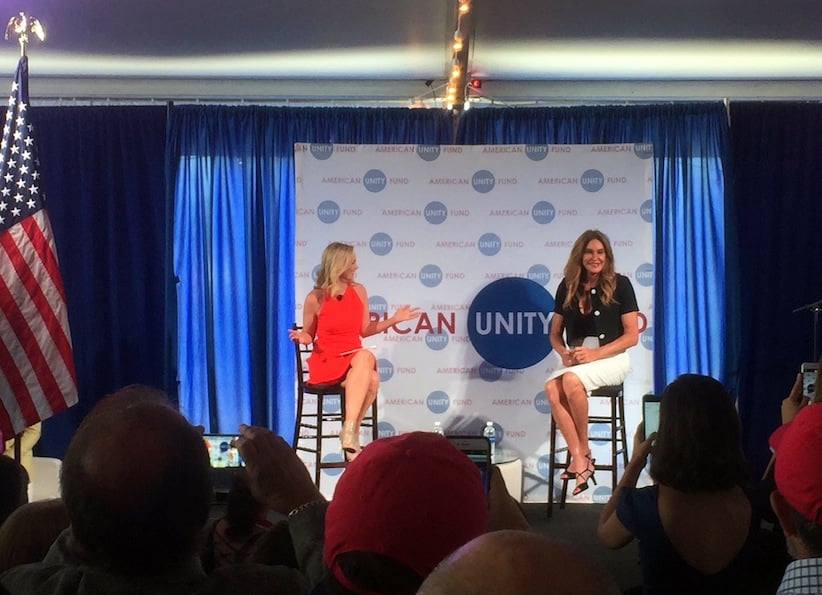 Caitlyn Jenner, right, speaks at an American Unity Fund brunch at the Rock and Roll Hall of Fame in Cleveland on July 20, 2016, on the sidelines of the Republican National Convention. Jenner said it was easier to come out as transgender than it was as a Republican. The transgender activist and Olympic gold medalist was speaking at a breakfast at the Republican National Convention to promote LGBT inclusion in the GOP. On the dais with Jenner is Margaret Hoover of the American Unity Fund. (AP Photo/Josh Lederman)

“The Platform Committee is an outlier,” Gregory Angelo stated. “Social conservatives are over-represented in that body. Look what propelled Donald Trump to the nomination: opposition to illegal immigration and opposition to bad trade deals that hurt the American worker. Not social issues.”

MORE: How Trump is splintering the Republicans’ evangelical alliance

Yet the advocates’ quest to soften the soul of the Grand Old Party was far from won. Outside the tent, dozens of conventioneers from the Peach State of Georgia were spending the morning not kneeling on the Rock of Ages, but perusing the museum’s tributes to the ages of Rock.

“As a Christian, gay marriage is against the Bible,” said delegate Sherry Barnes, an attorney from Augusta—the childhood home of James Brown, the Godfather of Soul. “There are other kinds of civil unions that you can have. It doesn’t have to be a ‘marriage.’ ”

“Do you think that Donald Trump can help to sell the party to gay voters?” Ms. Barnes was asked.

“We don’t have to sell ourselves,” she replied. “We are very inclusive. We have young people, minorities, and women.”

“Did you know that Caitlyn Jenner is a Republican?” a reporter wondered.

“I don’t think he is a Republican. I don’t think he registered as one,” said Sherry Barnes, wielding the masculine pronoun. ”And from what I have seen in the media, only partial surgery was done. I don’t know why you would want to dress as a woman and not be a woman.”

Under canvas, the brunch progressed.

Forty years ago this week, swaddled in star-spangled strength and Superman endurance, Bruce Jenner won Olympic gold in Montreal. Even then, Jenner said now, she wondered whether God the Creator had chuckled at her conception, saying, “Let’s make this one really athletic—but let’s give him the soul of a girl and see what he does.”

“We are part of society,” she said. “We’ve been around since the beginning of time.”

“It was easier to come out as a transsexual than as a Republican,” Caitlyn Jenner sighed.

Signs outside the RNC 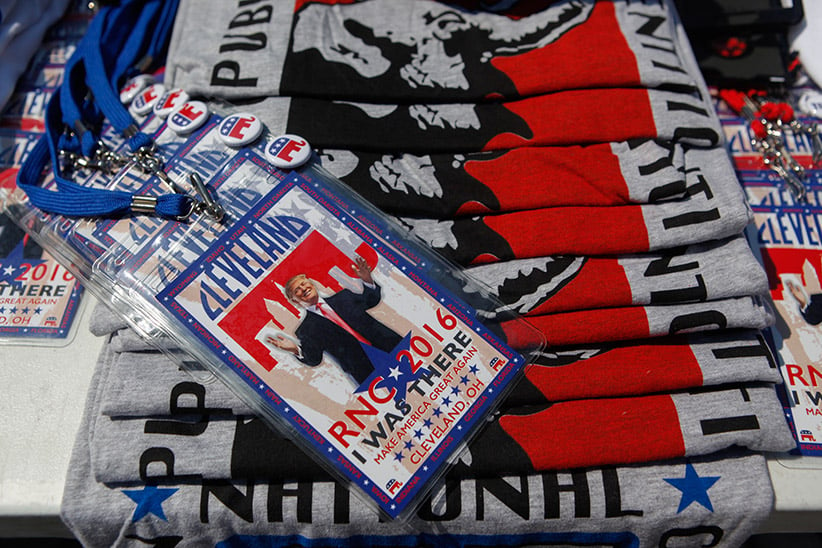