Andrew Cuomo to the DNC: 'At stake is the soul of America'

For the record, here's what Andrew Cuomo said on Thursday at the Democratic National Convention 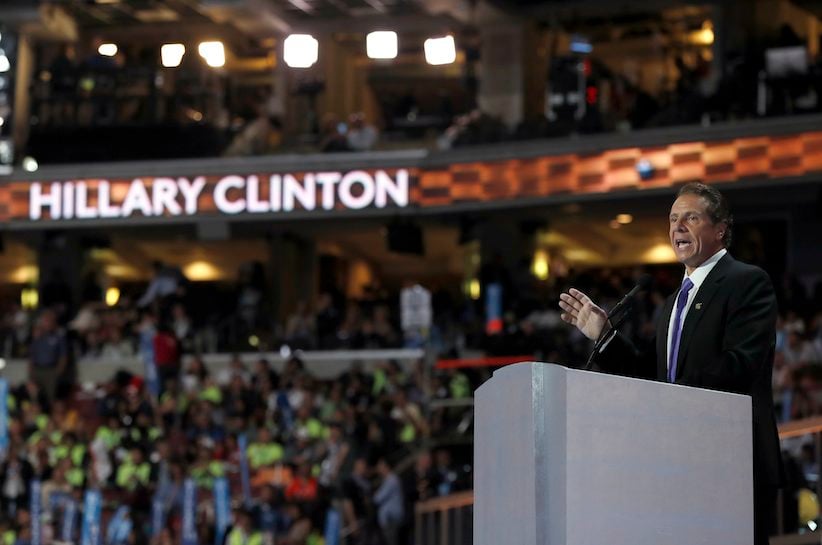 For the record, here are the prepared remarks for Andrew M. Cuomo’s address to the Democratic National Convention on Thursday, July 28, 2016:

I would like to acknowledge my father, who we lost last year. He gave the keynote speech in 1984, and he loved the Democratic Party.

The 1984 election was important because it was more about two opposing philosophies than two people. Even more profoundly, at stake this November is not which person or party wins or loses – at stake is the soul of America.

Last week, we heard the Republicans lay out their strategy. Unfortunately, it offered no new solutions. But it’s clear that their plan is to fan the flames of fear and offer a scapegoat for our problems. The Trump campaign is marketing a great distraction, using people’s fear and anxiety to drive his ratings. Their message comes down to this: Be afraid of people who are different – religions, colors, language. Stop immigration and the nation will automatically rise.

It’s not right, it’s divisive, it’s delusional, and we must expose the truth.

Republicans are suffering from short-term memory loss. Unless Republicans are all Native Americans, they are immigrants too! Republicans would cut this nation in half and turn one against the other. It would take our greatest strength – our diversity – and make it a weakness.

Fear is a powerful weapon. It can excite and motivate and get people to yell and scream. Fear can even bring you into power. But fear has never created a job, educated a child, and fear will never build a nation. Fear is not strength. Fear is weakness – no matter how loud you yell – and our America is never weak.

We have a different vision for this nation. We want to go forward. They say “Make America Great Again”; we say make America greater than ever before.

Imagine how great America can be when every child, rich and poor, is educated; when we judge people by content of character; when we understand that the greatest feast is the one enjoyed by the most people at the table; and when our government has the strength to fight for freedom but the intelligence to know that the strongest four-letter word is not hate but love.

We know what Republicans will say: that Democrats are dreamers. We are dreamers, but we are also doers. FDR lifted a nation from its knees. JFK launched our mission to the moon. LBJ enacted voting rights for all. President Obama delivered health coverage for 20 million uninsured Americans.

Mario Cuomo was a dreamer too, but our progressive government is working in New York. We raised the minimum wage to $15 because we insist on economic justice. Enacted paid family leave because all workers deserve dignity. Are rebuilding our middle class by working hand in hand with organized labor. Protecting the environment by banning fracking. Fought the NRA and won and outlawed assault weapons to keep them from the hands of madmen. Passed marriage equality and GENDA, not because the Supreme Court said we must legally but because we believed that we should morally.

These are not dreams; they are realities. Progressive government works, and we proved it. And we did it together, without leaving anyone out or anyone behind. Because we believe that we are interconnected and interrelated – there is a cord that connects you to you and you to you. Maybe you can’t see it, but it’s there, and it weaves the fabric of community, and when one of us is raised we’re all raised, and when one of us is lowered we’re all lowered.

The Republicans say our vision of community is not possible, but we know it is. Fifteen years ago, onSeptember 11th, we saw death and destruction, unimaginable horror and cruelty; but we saw something else – we saw this nation come together. We were not Texans, Californians, or New Yorkers. We weren’t Democrats, Republicans, or Independents. We weren’t Muslims, Christians, or Jews – we were Americans. We weren’t black, white, or brown – we were red, white, and blue. And we were there for each other as one family. We cried together, we mourned together, and then we got up and we rebuilt together. That was America at its best.

Today the Freedom Tower stands higher than anything before, a monument to the fact that there is nothing that we can’t do when we come together. E pluribus unum – out of many, one. This is our founding premise and our enduring promise. That is our goal, and Hillary Clinton is the person to make it a reality.

I spent eight years in the Clinton Administration and worked with Hillary all over the globe. I’ve seen her in the trenches and in the good days and bad. She stood on the world stage and declared that human rights were women’s rights. She fought for health care for all Americans. As Secretary of State, she repaired America’s reputation. And she won’t just shatter the glass ceiling; she has the vision, intelligence, and qualifications to be a transformative force. She will unify, not divide this nation and move us forward together. That’s why we must make Hillary Clinton the next President of the United States!

And that was my father’s timeless message in 1984. He was the keynote speaker for this nation’s better angels, and he was beautiful. And Pop, wherever you are – and I think I know where – at this time of fear, help this country remember what truly makes it great: that we are one nation, under God, indivisible, with liberty and justice for all.