What Canadians asked Google about the Republican convention

Maclean's answers what Canadians are wondering about the Republican National Convention 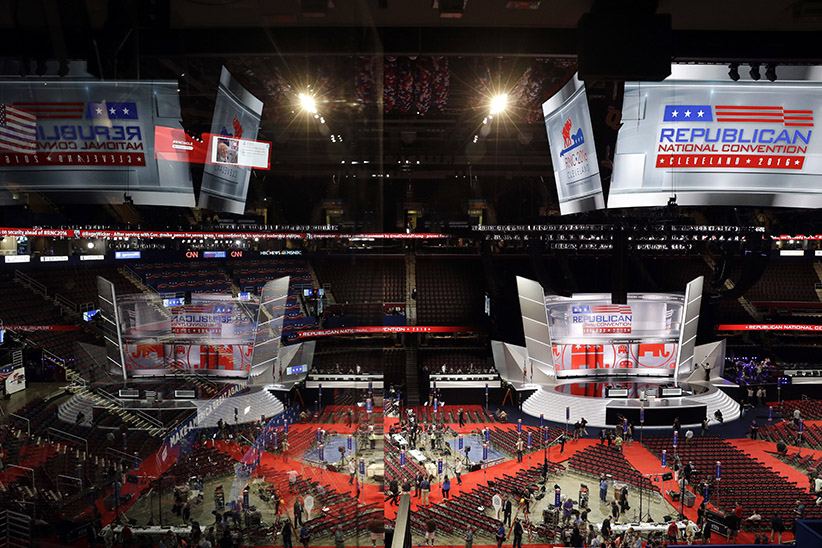 The Republican National Convention in Cleveland has begun. Maclean’s answers five of the most googled questions Canadians were asking in the lead-up to the convention.

1. When is the Republican National Convention?

Right now. It started Monday morning and will run until Thursday evening. Typical conventions are an opportunity for the presumptive nominee to present themselves to the world and for party bigwigs to rail against the opposition. But nothing about Donald Trump is conventional and there’s no way his convention is going to be. So far, there has been an attempt by some anti-Trump delegates to demand a vote regarding rules of the convention. The ultimate aim, reportedly, was to delay the proceedings so as to embarrass Trump. It didn’t work.

2. Who is speaking at the Republican National Convention?

3. Will Trump win the election?

The odds are currently against him, but it is certainly possible. A poll released today from Monmouth University shows Hillary Clinton with a three-point lead, down from a six-point lead a month ago. RealClear Politics, which maintains a rolling average of polls, puts Clinton at 43.8 per cent to Trump’s 40.6 per cent nationally. The expert consensus is that Trump probably won’t win. But the experts have been spectacularly wrong this election cycle. Many of the same people who’ve spent the past 12 months saying that Trump couldn’t possibly win the Republican convention—notably FiveThirtyEight’s Nate Silver—are now confidently predicting he can’t win the presidency. Clinton is in the lead today but November is a long way off and 2.2 per cent isn’t all that much of a lead.

Mike Pence is Donald Trump’s running mate. Currently, Pence is the governor of Indiana. If Trump wins he’ll be the vice-president of the United States. Pence served six terms in Congress representing Indiana. He has a reputation as a social conservative and is largely seen as a safe pick that helps Trump shore up support amongst conservative supporters concerned about some of Trump’s more left-wing proposals. It’s unclear how much influence Pence will have over Trump or whether their past disagreements will hurt their relationship. For one thing, Pence endorsed Ted Cruz in the Indiana primary. For another, Pence co-sponsored the Iraq war resolution in 2002; Hillary Clinton merely voted for the war, and Trump regularly lambastes her for supporting what he calls a “disaster.” Pence and Trump got off to a rocky start with Trump reportedly trying to back out of his pick at the last second. Things didn’t get better in their first major interview with 60 Minutes. It was a very awkward affair that included Pence claiming Trump wasn’t running a negative campaign and Trump interrupting him to call Hillary Clinton “Crooked Hillary.”

5. Why is the Republican symbol an elephant?

Thomas Nast, a cartoonist working for Harper’s magazine, drew an elephant with the words “The Republican Vote” written on it in 1874. The comic, titled ‘The Third Term Panic,” was a commentary on journalists’ fears that Ulysses S. Grant was a potential American dictator. Nast began using the elephant to represent Republicans regularly in his drawings and soon other cartoonists picked up on it. Eventually, the elephant was enmeshed in the popular imagination as a Republican symbol and would be officially claimed by the Republican Party.