As coronavirus spreads, Americans need a leader who soothes and unites. Instead, they have Trump.

'A lot of good things are going to happen,' said the U.S. president as the number of COVID-19 cases in his country approached 1,000, and the death toll reached 29 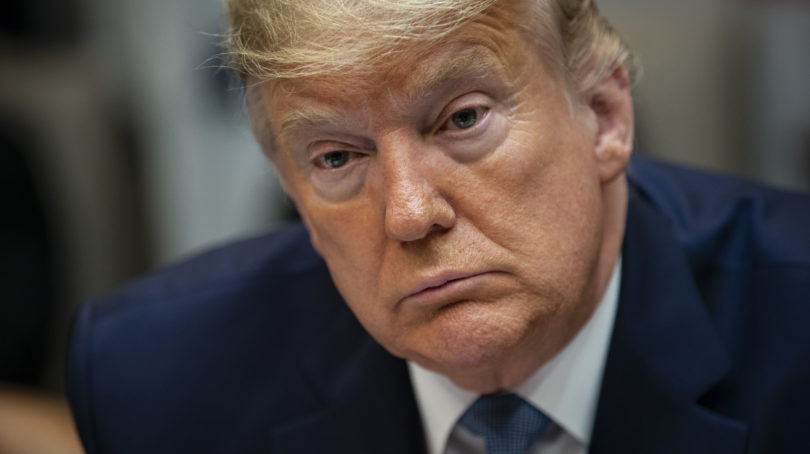 “Our common difficulties concern, thank God, only material things,” Franklin Delano Roosevelt told Americans in his famous “the only thing we have to fear” speech, 12 minutes into his 12-year presidency, back in March of 1933.

“The withered leaves of industrial enterprise lie on every side,” Roosevelt unflinchingly reported. “The savings of many years in thousands of families are gone. More important, a host of unemployed citizens face the grim problem of existence.”

Compare this with Donald Trump at the U.S. Capitol on Tuesday:

“Be calm.  It’s really working out.  And a lot of good things are going to happen.”

No one yet knows if the micro-organism currently wreaking fear and fatality around the planet will be remembered as a 21st-century Black Death, or as a surprise slap delivered by taunting, capricious Nature. In China, the onslaught seems to be abating. In North America, meanwhile, it may just be getting started. Still, hoarding aloe-spiked alcohol at Costco does not yet equate with what FDR labelled “nameless, unreasoning, unjustified terror which paralyzes needed efforts to convert retreat into advance.”

In both circumstances—in 2020 as in the dolour of the Great Depression, the American citizenry looks to the man in the White House to fill the role of national soother. In 1933, the patrician new president had known the humbling ravages of the virus that causes polio. This time, the rich man in the White House is an admitted paranoid germaphobe.

“So last year,” Donald Trump was tweeting, rather unsettlingly, while schools and colleges were shutting down from the New York suburbs to the Pacific Northwest, “37,000 Americans died from the common Flu. It averages between 27,000 and 70,000 per year. Nothing is shut down, life & the economy go on. At this moment there are 546 confirmed cases of CoronaVirus, with 22 deaths. Think about that!”

Think about that if it’s your Nana in that nursing home in Seattle. Or your poor sophomore at Harvard, turfed from her shuttered dormitory into the Bostonian frost.

On Tuesday, with his own surgeon general pronouncing that the COVID-19 incursion “is likely going to get worse before it gets better,” Donald Trump made two excursions outside his ovoid sanctum. He went to the U. S. Capitol to cheerlead Republican senators into accepting his fabulously expensive prescription for keeping the leaves of industrial enterprise from withering—a temporary elimination of the payroll tax that businesses small and large must fork over. And for those to whom even a few weeks of not going to work could exacerbate the grim problem of existence, Trump dangled a favourite bauble of the fanatic radical socialist Left: paid sick leave.

After his senatorial luncheon, Donald Trump told relieved reporters, “I feel extremely good. I feel very good. But I guess it’s not a big deal to get tested. And it’s something I would do.But again, I spoke to the White House doctor—terrific guy, talented guy—he said he sees no reason to do it.”

Then, back at the White House, he awarded the Medal of Freedom to a man who fought the sort of wars that the 45th president actually is capable of understanding—the clashes of armies, artillery and ambuscades that he read about in military school, not the science-based struggle against invisible germs and ungermane rumours that he himself must wage today.

It went around the neck of General Jack Keane, a native New Yorker, Vietnam paratrooper, and architect of George W. Bush’s Iraq War “surge”—a man who lived the kind of life that Donald Trump himself might have pursued when he came out of boarding school, had those pesky bone spurs not crippled him, Roosevelt-like, and kept him from fearlessly leading men to glory under Communist fire.

RELATED: Trump surrenders, declares it a victory, and goes home

Toe-to-toe with an enemy he cannot nuke or drone or ridicule to death—and with eight months of campaigning against former vice-president Joe Biden looming as the probable outcome of Tuesday’s Democratic primaries—this was Trump’s most perilous hour after three years in the White House. At stake was the health of his population and, should the stock markets collapse and the banks fail in a viral pandemonium of panic, the savings of many years in thousands of families, if not millions.

All the president had to do was calm a country—and overcome the most polarized populace this land has ever known. On Tuesday, an Axios/Survey Monkey poll found that nearly two-thirds of Republicans believe that the seriousness of the novel coronavirus has been “greatly exaggerated,” compared to only 31 per cent of Democrats. And Democrats were far more likely to plan to avoid shopping malls, theatres and sporting events.

“When I was growing up. there were three major networks and everybody watched one of them, and they all said pretty much the same news in the same way every night,” noted Ellen Weintraub, the U.S. federal election commissioner, at a briefing on Tuesday. “And our entire citizenry had just a set of common premises and assumptions and understandings about the way the world worked. And I think we’ve become more segmented and more polarized, and that’s concerning.”

Still, at least one ember of good news glowed amid the gathering darkness—the indestructible Donald Trump remained COVID-free as darkness fell. His new chief of staff, far-right Freedom Caucuser Mark Meadows of North Carolina, was in self-quarantine after spending a minute or two in close proximity to an attendee of a conservative powwow last weekend in Maryland. So were several other Trump allies, making the president the epidemiological equivalent of the heroine of the 1927 hit song who “danced with a man, who’s danced with a girl, who’s danced with the Prince of Wales.” But The Donald remained hale, and his Deplorables defiant enough, for the president to schedule a rally in Denver on Friday, even as Bernie Sanders and Joe Biden were cancelling their own big-tent events.

“There’s no symptoms, no anything,” Trump was whistling outside the Senate chamber Tuesday, as the nation—or half the nation—sighed with relief. “And you know what?  If there were, you people would be the first to know it. You would—you would maybe even tell me about it.”