At George H.W. Bush's state funeral, every tribute seems a rebuke to Trump

Excellence, civility, intelligence, modesty: Words used to describe Bush Sr. recall what a U.S. president can be—and what the current one is not 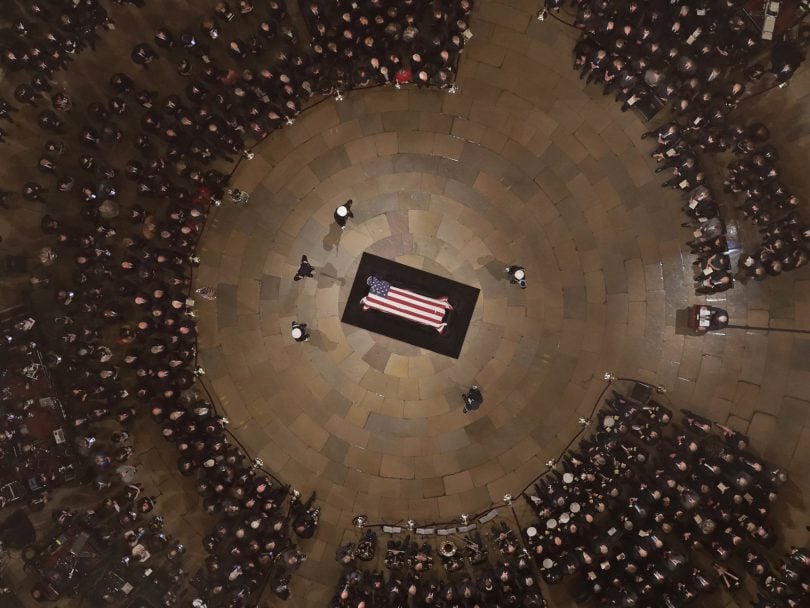 The body of former President George H. W. Bush lies in state in the U.S. Capitol Rotunda in Washington. (Pool photo by Morry Gash via AP)

Former U. S. President George Herbert Walker Bush, who kept a battered baseball mitt in the same drawer in the Oval Office in which Donald Trump hides his tax returns, skydived back to Washington for a somber and symbolic funerary week on Monday, 26 years after he was tagged out by Bill Clinton while trying to stretch a single term into a double.

Bush’s casket arrived at the Capitol Monday evening to be attended by military guards, eight of the nine justices of the Supreme Court (all but Ruth Bader Ginsburg), a flock of lame-duck senators and congressmen, and most of Trump’s cabinet (but markedly not the 45th president himself; he’s invited to a formal funeral on Wednesday, where he will be seen and not heard while Brian Mulroney—the former Canadian PM and long-time Bush family friend—delivers a eulogy).

But as a Christian minister slowly and emphatically enumerated the flier, father and statesman’s many qualities—“excellence … humility … civility … intelligence”—each adjective contrasted thunderously with the current occupant of the White House.

A widower for only seven months—after 73 years with his indomitable Barbara—Bush died last weekend at the age of 94. As a younger man, he survived the destruction of his Navy bomber by Japanese gunnery, served diplomatically from China to the UN to the CIA, then lived to see one of his sons become a war-on-terror president and another’s ambitions crushed by a single hyphenated word—“low-energy”—in the Trumpian cataclysm of 2016.

RELATED: They may be dynastic. But let’s not dismiss Clinton or Bush.

Like moonwalker Neil Armstrong, George H. W. Bush quietly grieved for decades the loss of a tiny child—a daughter named Robin, taken by leukemia when she was only three—then ascended to heights few men achieve. At the Capitol, his coffin was placed  beneath the statues of Dwight Eisenhower, whose war he fought, and Ronald Reagan, whose job he long sought and eventually captured. He still was skydiving in his mid-80s, displaying the unquenchable vibrancy that his wonkish son Jeb never could muster in his own White House bid.

“His life was a hymn of honour,” Paul Ryan, whose time as Speaker of the House of Representatives ends on Jan. 3, said of Bush 41, as Bush 43 and the rest of the Kennebunkport clan sat in grim, evident sadness. “His legacy is grace perfected.”

“There was a kindness,” Vice President Mike Pence iterated, and he, too, listed the senior Bush’s qualities: “devotion … modesty … ” But, like any American politician, Bush also endured—and dished out—and the kind of vicious mockery that came with the profession long before the Donald’s unhinged age.

“George Bush was born on third base and he thought he hit a triple,” Ann Richards, the governor of Bush’s adopted Texas, hooted at the Democratic National Convention in 1988, the year that the patrician New Englander, senator’s son and former Yale first baseman defeated the hapless Mike Dukakis to become the 41st American president. (Bush had just finished eight years as Ronald Reagan’s veep.) 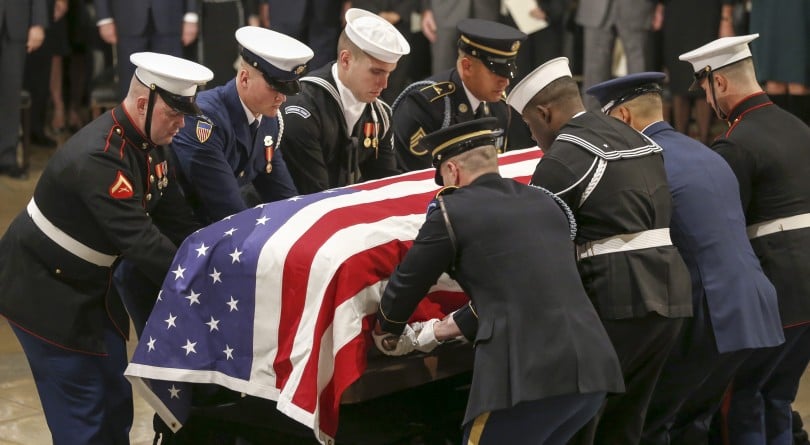 The casket bearing the body of former U.S. President George H.W. Bush is carried into the Rotunda of the U.S. Capitol in Washington (EPA/MICHAEL REYNOLDS)

The senior Bush could give as well as he took—he defamed Democrat Dukakis, the governor of Massachusetts, as ”a card-carrying member of the American Civil Liberties Union,” and cast him as a traitor for not forcing schoolteachers to force their pupils to recite the Pledge of Allegiance. Firing back, the New York Times ridiculed Bush when, in the paper’s words, he “emerged from 11 years in Washington’s choicest executive mansions to confront the modern supermarket” and seemed befuddled by the checkout scanner. (He was just pretending, but even in the politics of 1992, the truth was not the truth.)

Bush went to war with Saddam Hussein but spared the tyrant’s life and rule, only to see his son and successor throw away the lives of thousands of American soldiers and hundreds of thousands of Iraqis, squander the sympathy of the world, and enflame the Cradle of Civilization in a vain and vainglorious attempt to finish the job.

In much the same way, Bush Senior’s defeat by Bill Clinton in the “it’s the economy, stupid” election of 1992 has gone down in history as the necessary downfall of a detached oligarch at the hands of a sax-happy Baby Boomer. But, late in his life and even more pointedly since his death—his last words were “I love you” to George W.—the 41st president has grown to become an icon of conscientious service, physical courage, and, as he liked to say, “a kinder, gentler nation,” as if such a fairyland ever really has existed.

RELATED: Why liberals are suddenly getting a little bit nostalgic for George W. Bush

“The Thousand Points of Light. What the hell was that by the way?” Trump  sneered—typically—at a rally in Montana  in July, mocking Bush’s famous appeal to charity and community service. But the 45th president, and his First Lady, did spend two silent minutes in the Rotunda later Monday night.
“We need at this juncture in our history a certain sense of morality and a certain sense of dignity,” George Herbert Walker Bush said when Richard Nixon, until 2016 the sinister emblem of presidential calumny, as least in Democrats’ eyes, resigned in shame in 1974. And these were the traits that were held aloft on Monday evening as the soldiers stood watch over the casket.