At long last, Donald Trump is on the road to impeachment

The president himself 'is the smoking gun,' says one House Democrat. 'He has committed the crime in front of all of us' 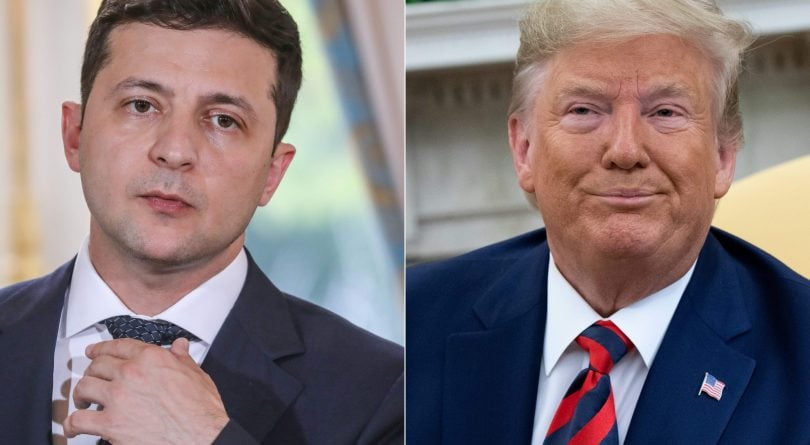 Cornered in a cold and lonely cave of his own construction, U.S. President Donald J. attempted to claw back from the brink of impeachment Tuesday by unsheathing a weapon he has been unwilling to deploy throughout his tumultuous term in office—the truth.

With the Democratic caucus in the House of Representatives—led by Speaker Nancy Pelosi and the venerated Rep. John Lewis of Georgia—moving decisively and swiftly toward beginning an official impeachment process, Trump announced that he will release —within 24 hours—a full and declassified transcript of his now-infamous conversation with the fellow TV star who holds the presidency of Ukraine.

Wednesday’s document dump may be Trump’s last chance to staunch the “Mike Pence for President” wave that has swept the opposition benches. But, as Rep. Pramiya Jayapal, Democrat of Washington, told a Maclean’s reporter on Tuesday, “It was never about the transcript. We’ve got to get off the transcript. The issue is not the transcript. The President of the United States has admitted asking a foreign head of state to investigate a political rival. I think we have to stop looking for a secret smoking gun. Donald Trump is the smoking gun—he has committed the crime in front of all of us.”

RELATED: Will Trump’s hotels finally bring him down?

If Trump is impeached by a simple majority in the House—an action that appears inevitable with most of the Democratic membership now supporting it—the president will face trial in the Senate with the chief justice of the U.S. Supreme Court acting as presiding judge and a two-thirds majority needed to force his removal from office. Two U.S. presidents—Andrew Johnson (1868) and Bill Clinton (1998)—have been impeached by the House. Each was acquitted in the Senate. Facing certain conviction by his own party in 1974, Richard M. Nixon chose to resign.

“The Democrats have been talking about impeaching Donald Trump for a year and a half,” Senator John Kennedy, Republican of Louisiana, puffed contrarily in conversation with a Maclean’s correspondent. “It’s time to go hard or go home. If you’re going to do it, do it. Do it.”

Months after their clean-up hitter, Robert Mueller, went down on strikes, and after years of prattling about emoluments and nepotism, that foulmouthed Congresswoman Rashida Tlaib from Michigan finally appears to be right—they are gonna impeach the brothertrucker.

It was late Tuesday afternoon when Speaker Pelosi ended a full year of hesitation and reticence when she announced that her party indeed will do it, and they will do it soon.

“This week, the president has admitted to asking the president of Ukraine to take actions which would benefit him politically,” the Speaker said. “The actions of the Trump presidency revealed the dishonorable fact of the president’s betrayal of his oath of office, betrayal of our national security and betrayal of the integrity of our elections.

“Therefore today, I’m announcing the House of Representatives is moving forward with an official impeachment inquiry.”

RELATED: The Democrats put the i-word—impeachment—back on the table

Her statement came hours after Rep. Lewis, the 79-year-old civil rights paragon, said on the floor of the House of Representatives, “We cannot delay. We must not wait. Now is the time to act. I have been patient while we tried every other path and used every other tool. We will never find the truth unless we use the power given to the House of Representatives and the House alone to begin an official investigation as dictated by the Constitution. The future of our democracy is at stake”

Speaking to reporters in New York after delivering a lifeless and un-Trump-like address to the General Assembly of the United Nations, the president maintained that the transcript will prove that “There was no quid pro quo … no pressure applied, nothing” during his conversation with Volodymyr Oleksandrovych Zelensky on July 25.

Bivouacked in his own bed at Trump Tower for the week, far from the Washington maelstrom, the president asserted Tuesday that he had delayed a payment of hundreds of millions of dollars in assistance to the Putin-pressured Ukrainians at midsummer “because I wanted other countries to pay.” On Monday, he had claimed that he didn’t want to wire funds to Kyiv only to have them pocketed by corrupt bureaucrats. (Ukraine is ranked number 120 on the global Corruption Perception Index, with the United States rated as the 23rd-most-honest nation, and Canada a sterling ninth.)

“It’s just a continuation of the witch hunt,” Trump told reporters in New York, according to pool reports. “Our country’s doing the best it’s ever done.”

“They’re going to lose the election,” Trump said, reducing his predicament to its existential core—not as a question of ethics, honesty, or criminality, but as yet another skirmish in America’s unending political civil war.

“They say it’s a positive for me,” Trump postured, echoing an argument that several Democrats had put forward before Speaker Pelosi’s capitulation: that Trump’s almost-certain acquittal in the Senate will hand him a powerful armament for the 2020 campaign.

“How can you do this and you haven’t even seen the phone call?”

The capital and Capitol were transfixed by the drama, while, in the words of Sen. Bill Cassidy, Republican of Louisiana, the rest of the country cared “Not at all. Not at all.”

Held hostage to the mud fight over the president’s alleged scheme to withhold military aid to Ukraine unless the former Soviet republic investigated the business wheelings of Hunter Biden, son of the former vice-president who—what a coincidence—is a leading Democratic contender for the White House in 2020, were gun control, health insurance reform, prescription drug pricing and the U.S. Mexico Canada Agreement that was initialed by the three countries’ leaders only 298 days ago.

Congressional leaders maintained that the body could pass important legislation on a bipartisan basis even as it tied itself in knots over impeachment. Sen. Bernie Sanders, Independent of Vermont, said that it is time for politicians to prove that “they can walk and chew bubblegum.”

Speaking in Delaware on Tuesday, former vice-president Biden said “I knew when I decided to run this president would attack me and my family. That’s what he does.

“And I know that even though every reputable publication that has looked at these charges has found them baseless, untrue, and without merit, it won’t stop him. I can take the political attacks. They’ll come and go and soon be forgotten. But if we allow a president to get away with shredding the United States Constitution—that will last forever.”