The inevitability of Donald Trump 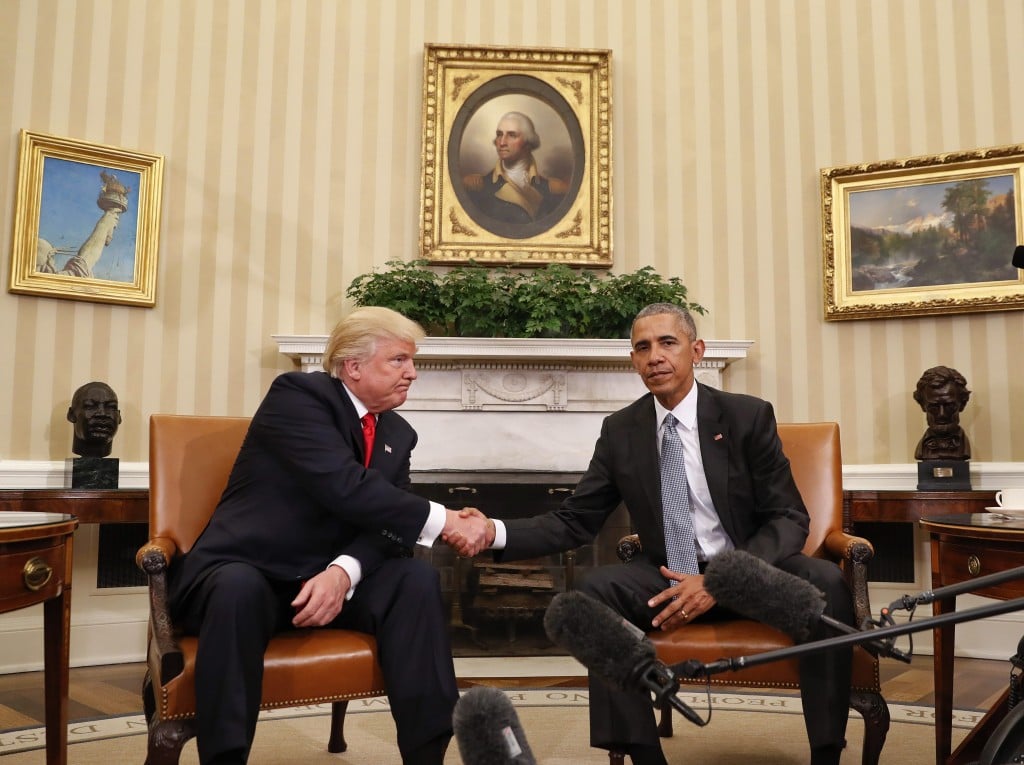 On Thursday, less than 48 hours after he’d been named president-elect of the United States of America, Donald Trump went to the White House. Counter to custom, no journalists travelled with him. And, counter to custom, when he arrived at the White House, the current President–in this case, Barack Obama–did not stand for a photo op with him outside, before their meeting began.

The last time America saw Barack Obama and Donald Trump in the same room was in late April 2011, at the Washington Hilton. Trump had been invited by the Washington Post to sit at its table during the annual correspondents’ dinner. It was two days after Obama had released his long-form birth certificate, the item that had led Trump to become the loudest, most public figurehead of the outlandish, debunked, theory that Obama was a foreigner and thus an illegitimate President.

“Donald Trump is here tonight!” Obama said from the dais that night, to laughter and applause. “No one is prouder to put this birth certificate matter to rest than the Donald,” the President continued. “And that’s because he can finally get back to focusing on the issues that matter–like, did we fake the moon landing? What really happened in Roswell? And where are Biggie and Tupac?”

“Say what you will about Mr. Trump,” Obama continued, “he certainly would bring some change to the White House.” At that moment, the screens in the room displayed “Trump White House Resort and Casino.”

Everyone laughed some more.

And Trump? Trump just sat there. As New Yorker writer Adam Gopnik, who was in the room, later described, Trump’s “humiliation was as absolute, and as visible, as any I have ever seen: his head set in place, like a man in a pillory, he barely moved or altered his expression as wave after wave of laughter struck him … he sat perfectly still, chin tight, in locked, unmovable rage.”

In January, Donald Trump will move into the White House.

In the meantime, we have this picture of Trump in the Oval Office shaking hands with the President who once mocked him—and of Obama seated next to the man who will not only attempt to undo much of Obama’s legacy, but also to some extent is that legacy.

Related: The rise of Donald Trump

At the heart of the many worried tweets, disbelieving Facebook posts, and anxious conversations that have sprung up over the last two days amongst those who did vote, or would have voted, for Hillary Clinton is this factor: that the end result of what was seen as eight years of bending history toward progress perhaps, in the end, accomplished just the opposite. That instead, all it did was fuel a powerful blowback movement that now has as its first priority the undoing of all that work.

Obama’s election eight years ago was, aside from his race, not extraordinary. His message of hope resonated with a nation still embroiled in two Middle Eastern conflicts, a nation that appeared to be dangling on the precipice of economic ruin. His election was not, for instance, fraught with the legal questions that surrounded George W. Bush’s first win–it was a pretty straightforward deal. And yet, for the remainder of his tenure, Obama’s election was held up in some quarters as equally contentious as the Bush-Al Gore fiasco. So just as the left had spent the two terms before Obama’s win complaining about Bush, the right (and, eventually, alt-right) pointed to that moment in 2008 as the one when their country was taken from them by a nefarious actor.

Throughout the long months of this election, a line from Indiana Jones was applied to the Clinton-Trump tilt: “It had to be snakes.” It was the feeling that Clinton’s fight was inevitably going to be against those things she hated most.

“Of course Hillary Clinton is going to have to run against a man who seems both to embody and have attracted the support of everything male, white, and angry about the ascension of women and black people in America,” Rebecca Traister wrote for New York magazine back in May. “Of course a woman who wants to land in the Oval Office is going to have to get past an aggressive reality-TV star who has literally talked about his penis in a debate.”

Yet, all along, the flaw in that line of thinking was the assumption that Clinton would inevitably triumph. Now that she has not, in retrospect it appears we might have better attached this analogy elsewhere.

For Trump, in his vocal, incessantly racist birther campaign, and in his relentless fact-free demonization of a progressive, intellectual leader, represents even more literally the forces that have always worked, and still do work, to undermine and destroy not Hillary Clinton, but Barack Obama.

In some ways, it had to be Trump.