Behold Donald the Great, unconvicted and brimming with optimism

Allen Abel: Trump’s State of the Union boast-fest reveals the price of the Dems' failure to take him down: he's setting himself up as a candidate of hope 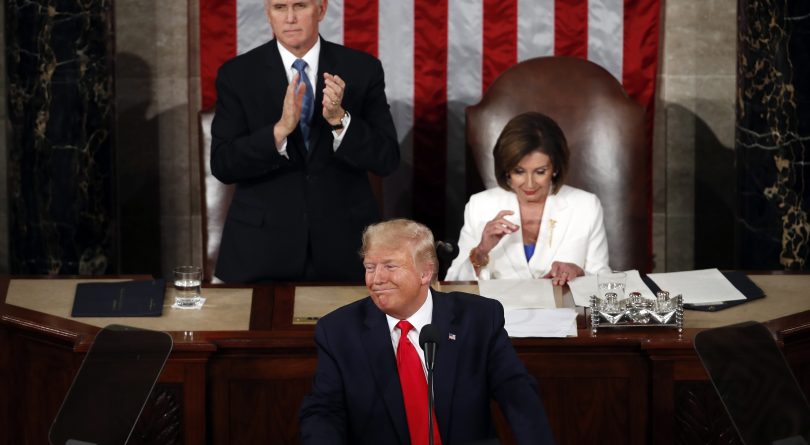 Donald J. Trump promised to reform the American system of criminal justice, and here he was, Public Beneficiary Number One, pastoring from the pulpit in the United States Capitol on Tuesday night instead of packing his steamer trunk for a cruise to Alcatraz.

With mere hours remaining until Trump’s formal dispensation was to be signed on Wednesday afternoon by his made men in the Senate, even many Republicans weren’t disputing that the Democrats’ charge of abuse of power had The Donald dead to rights. But with those same men and women refusing to vote to convict him—“Let the people decide!” they cried, passing the buck—the president remained as free as a bird to chirp, cluck and crow about the state of his ever-loving union.

“Our ancestors built the most exceptional Republic ever to exist in all of human history,” Trump said, “and we are making it greater than ever before.”

“Relentless optimism” was the theme of the evening, the White House announced.

“I’m not bitter,” the Great Truthteller swore to television anchorpeople before the grand address.

“I will not use my presence at a state ceremony to normalize Trump’s lawless conduct & subversion of the Constitution,” snarled Rep. Alexandria Ocasio-Cortez, the first-term democratic-socialist Democrat, making a big show of not showing up, but a Maclean’s correspondent in the press gallery was too high up to tell if Donald Trump was crying.

“We will never let socialism destroy American healthcare!” promised the president, to thunder from half the House.

Climate Cassandra Greta Thunberg also was absent from the First Family’s guest list, uninvited to join the now-customary war veterans and victims of illegal immigrants with guns as the three branches of the U.S. government converged beneath the Capitol dome on one of the alarmingly warmest February nights in Washington history.

Chief Justice John Roberts, the presiding officer at Trump’s trial-by-Senate, sat in the first row beneath the defendant this time, having successfully walked the tightrope of two weeks of bitterly partisan circus performances, preserving his status as the leading figure of equanimity and decorum in the District of Columbia and beyond.

Impeachment prosecutors Adam Schiff and Jerrold Nadler sat side by side, stone-faced as the quarry they failed to capture rambled on.

RELATED: The presidential masquerade of Donald Trump’s State of the Union speech

Speaker Nancy Pelosi, whose acquiescence to the blood lust of her more perfervid members provoked the impeachment ordeal, was right behind the president, sharing the dais with Vice President Mike Pence, the man she tried, but failed, to make Commander-In-Chief. Upon receiving her copy of his speech, Pelosi reached over to grasp Trump’s hand, and found herself shaking air. As he wrapped up, she tore the speech in half and tossed the scraps aside.

Apple-cheeked Mitch McConnell, Republican of Kentucky, smiled up at the president whose hindquarters he had just saved.

The word “impeachment” never was uttered by the man in the long red tie.

“As the world bears witness tonight, America is a land of heroes,” Trump said. “This is the place where greatness is born, where destinies are forged, and where legends come to life.”

Halfway through the ritual verbosity, Melania Trump awarded the Presidential Medal of Freedom to right-wing radio deity Rush Limbaugh, hours after El Rushbo announced that he has been diagnosed with advanced lung cancer.

Democrats, as usual, were foaming at the mouth about the “mob boss running our country,” as Rep. Jackie Speier of California called Trump, but the president’s oratory, his spirits, and his approval rating never were higher.

On Monday, a new Gallup poll had 49 per cent of Americans approving of Trump’s performance, the loftiest crest of his seasick term.

To the sprung indictee, America in 2020 is one great big Super Bowl ad made real, as in the Walmart commercial from last Sunday in which the mammoth retailer limned that

From where we sit just down the street, near the Post Office, by the park,

When we stop and look around, what we see are sparks —

Sparks of hope, of compassion, of communities who stand firm

When neighbors lift each other up, expecting nothing in return . . .

“Our spirit is still young; the sun is still rising; God’s grace is still shining,” was Donald Trump’s version of the same.

As results from Monday’s cockamamie Iowa caucuses trickled in on Tuesday evening, Trump’s uncharacteristic ladling of daylight and sugar plums was boxing Democrats into having to profess a much darker vision of the state of the American union heading into the maw of the 2020 campaign.

RELATED: Trump’s best day comes on the eve of his impeachment trial

“When they go low, we go high,” Michelle Obama famously boasted in Philadelphia in 2016, but what if Trump goes higher?

“Don’t believe Donald Trump when he says the state of the union is strong,” Joe Biden was forced to mourn in a fundraising email after his dismal showing in Iowa. “America is in crisis.”

Morbid despair plus darkling pessimism rarely is a formula for electoral success, but an upbeat and Reaganistic Trump—should he be able to hold this pose until November—would leave his enemies no choice.

“We are here to be the reminder that, when he locks people in cages, when he mocks and abuses women, there’s not one thing to be optimistic about in that picture of America,” Rep. Annie Kuster told a Maclean’s reporter at the Capitol. “Having just come from my state of New Hampshire, he is not popular and people are not optimistic.”

“It is documented that he has lied 15,000 times as  president,” said Jackie Speier, Democrat of California, spreading as much gloom as possible on a night when the sun never set. “His optimism should be taken with a grain of salt.”