Feschuk on the final night of the Democrats' convention 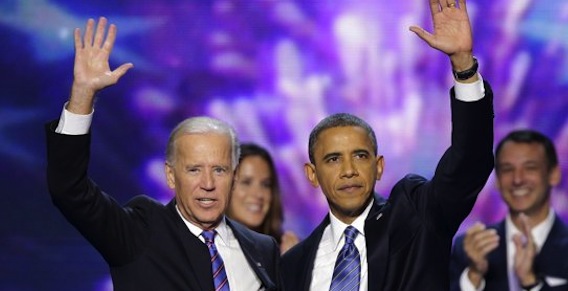 Accepting the I Killed Osama bin Laden Lifetime Achievement Award (and also, apparently, his party’s nomination for the U.S. presidency), Barack Obama delivered a speech that was… fine. It was good. I liked the ending, even if the whole “You did this, you were the change” felt a bit disingenuous and hyper-crafted to counter Republican attacks, disingenuous themselves, on Obama’s alleged claim to American entrepreneurs that, “You didn’t build this.”

That last sentence of mine was probably too long and a little confusing. Sorry about that.

Anyway, Obama’s speech will likely be the least remembered of the four major addresses to the Democratic National Convention. Bill Clinton’s was better. Michelle Obama’s was more striking and personal. And Joe Biden’s speech will be in the news for weeks to come as the world struggles to cope with the sudden shortage of the words “literally” and “folks,” on which Biden somehow cornered and, in a matter of 30 minutes, exhausted the global supply. On the other hand, he called his wife “kiddo,” which was kind of sweet.

(One bit of fact-checking: Both the vice-president and his wife told the convention that Joe had to propose five times before Jill Biden agreed to marry him. That makes Joe sound adorably dogged in his pursuit but, given what we know of Biden, it seems just as plausible that he botched or bloopered his way through the first four proposals, right? “Jilly, honey, what I want to know is: Will you––– aw, lookit that, I got some barbecue sauce on my shirt cuff. Gad dangit, that’ll never come out! Jeesh. Uh, where was I?”)

But enough blather. It’s time for me to do something useful. Using direct quotations from Biden’s speech, I have prepared – for the sake of generations to come – a detailed brief compiling Joe Biden’s 11 critical lessons for those who are called on to serve as Vice-President of the United States.

Quote: “I see [the president] every day.”

Lesson: When the President enters your field of perception, he will be visible to you.

Quote: “I walk 30 paces down the hall into the Oval Office and I see him.”

Lesson: You work in the same building as the president.

Quote: “I watch him in action.”

Lesson: When the President does things, you sometimes get to see him do those things.

Quote: “I watched him stand up to intense pressure and stared down enormous challenges.”

Lesson: Again – he’s there, you’re there. You’re bound to see some things happen when they happen. So prepare yourself for that.

Quote: “I got to see firsthand what drove this man.”

Lesson: You’ll not only see him. You’ll see things about him.

Lesson: You’ll watch him. The President, that is.

Quote: “Ladies and gentlemen, I’m here to tell you… I watch it up close.”

Lesson: Hey, at this point, I’m thinking that instead of just sitting there and watching and looking and seeing, maybe you could go grab the guy a Coke or something? Make yourself useful.

Quote: “So we sat hour after hour in the Oval Office.”

Lesson: Or maybe a sandwich. I bet he’s hungry.

Lesson: Listen, someone needs to tell you this, Joe, and apparently Barack is too polite. It’s time to go back to your office. Or go home. You don’t always have to be hanging around the president, okay? And for the love of God, get your feet off the coffee table.

Quote: “Day after day, night after night, I sat beside him as he made one gutsy decision after the other.”

Lesson: Joe Biden is a stalker.

Quote: “We sat in the Situation Room.”

Lesson: The Situation Room has chairs.