The liberal mayor of New York is running for the highest ofﬁce in the land. If you think this makes New Yorkers proud, you don’t know jack. 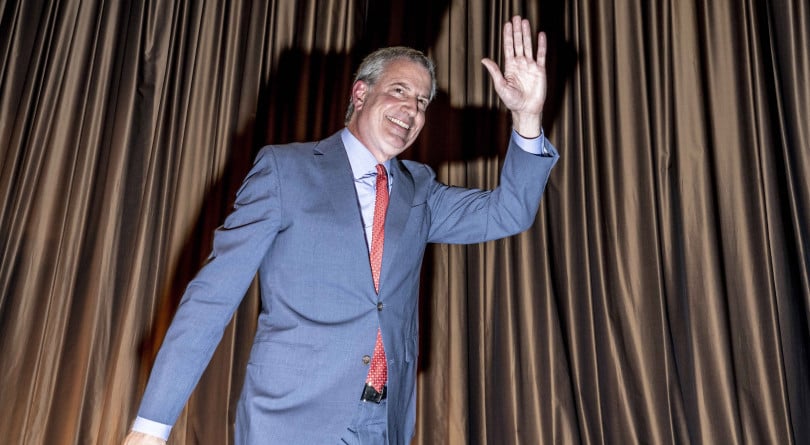 You knew that New York City Mayor Bill de Blasio’s campaign for the American presidency wasn’t beginning very well when one story in his hometown newspaper began, “Once a putz, always a putz.”

Only a pure-wool New Yorker would know what a putz is, and only a true New Yorker would be snide enough to scorn a neighbour with the chutzpah to run for the nation’s highest ofﬁce. But the 109th mayor of the Greatest City in the World is about as popular as a rat on the Broadway Local, so it was unsurprising when a reporter approached two employees of the municipal housing authority as they were lolling on a bench in City Hall Park and asked them, “How do you feel about de Blasio running for president?” and a guy named Mike answered, in a New York minute, “President of what?”

“Of the United States of America,” the journalist speciﬁed.

“I’m sure there are countries that would welcome him,” Mike said. “Just not this one.”

Mike was a member of Local 157 of the International Brotherhood of Carpenters, and so was his bench buddy Pat. Pat wasn’t a fan of de Blasio’s Oval Ofﬁce aspirations either, which placed him among the 76 per cent of Gothamites who said “no” when asked by pollsters if they thought he should enter the race, days before the mayor ignored them completely and became the 23rd ofﬁcial candidate for the Democratic nomination.

Seventy-six per cent disapproval feels low. For example, New York Attorney General Letitia James, a fellow Democrat, is on the nay side. New Yorkers “need a mayor who is going to be on the job 24 hours a day, seven days a week,” she said. “Has the crisis in affordable housing been addressed? No. Has income inequality been addressed? No. Equal pay for equal work? So what is the legacy? What are you running on? Yes, you can run for president, but the question is why? Por qué? What’s up?”

“I do feel that for quite some time both eyes haven’t been on being the mayor of the city of New York, and that’s a problem for me,” concurred Jumaane Williams, the city advocate, a position de Blasio held from 2010 until 2013. Even de Blasio’s fellow members at a YMCA in Brooklyn lined up against his entry. Flyers were posted in the locker room that said, “By entering these premises, you agree not to run for President of the United States. You agree to focus entirely on your current job here in New York City, which you are not excelling at.” 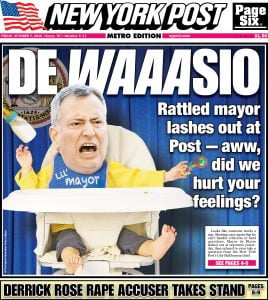 “I’ve been in 10 elections and won them all,” countered de Blasio on CNN. “People in New York City have supported my vision.” In 2019, apparently, the mayor remains a uniting force—nearly everybody here is united against him. “New Yorkers of all political stripes unify in distaste for Mayor Bill de Blasio’s ‘completely out of touch’ 2020 run,” reported the Daily News. “A lazy faker, a race and class warrior and a problem for those he claims to help,” wrote columnist Michael Goodwin. “There is near-universal agreement that the idea of the putz running for president is a joke.”

The issue does not appear to be a municipal ofﬁcial’s qualiﬁcations for higher ofﬁce per se. Pete Buttigieg, mayor of South Bend, Ind., is a top-tier Democratic candidate. Bernie Sanders served as mayor of Burlington, Vt. The issue here is, simply, Big Bill.

“The thing that kills me for him is that he has too many corporate interests,” said carpenter Pat, a native of Queens who described himself as a “progressive,” though not quite as far left as his member of Congress, the young ﬁrecracker Alexandria Ocasio-Cortez. De Blasio is one of the few 2020 hopefuls who have not eschewed big-money donors. 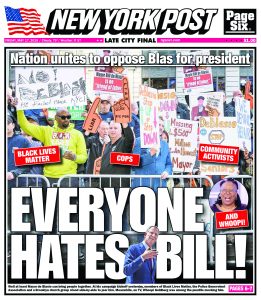 Whence arises this near-universal abnegation of Gotham’s tall and liberal mayor, a man married to an African-American writer and activist, barely a year after he won re-election with 67 per cent of the vote? (“Not my vote,” sniffed Mike.) Why has not one of de Blasio’s predecessors been able to extrapolate his (there have been no hers) experience at managing North America’s largest and most fractious metropolis into winning the White House?

Why has no New York mayor been nominated for president by a major political party since DeWitt Clinton (no relation to Hillary) lost to James Madison 207 years ago?

“Do you think it is because people outside New York don’t understand New Yorkers?” a woman named Ginny Detorres, who was eating lunch in Lower Manhattan, was asked.

“They understood Trump,” she slam-dunked in reply.

“How about Bill de Blasio for president?”

“No,” said Detorres, who works in marketing, down where the World Trade Center rose and fell. “And I’m not even a Republican.”

We were in a diner near Trinity Church, in whose courtyard can be found the tomb of Alexander Hamilton, whose monument extols him as “The PATRIOT of incorruptible INTEGRITY; the SOLDIER of APPROVED valour; the STATESMAN of consummate WISDOM.” It does not add that he was the founder of the New York Post, whose front-page headline the day of de Blasio’s campaign announcement was, “EVERYONE HATES BILL!”

“Let us explain why Democrats across America shouldn’t waste time or money on this guy,” the Post opined. “He is both incompetent and crooked; oblivious and arrogant. He won his current job in a fluke election in 2013, yet ever since has seemed certain that he’s destined to be a major national ﬁgure—despite falling on his face time after time.”

Imagine a New York mayor so detested that he might as well be rooting for the Boston Red Sox. Oh, wait. Having grown up in Massachusetts, he already does.

RELATED: Can love propel a Democrat to the White House?

De Blasio delivered his ofﬁcial announcement on the set of Good Morning America in mid-May. On the sidewalk outside the studio, the protesters included members of Black Lives Matter and 200 NYC police ofﬁcers.

The leader of the Black Lives Matter contingent that day was Hawk Newsome, a civil-rights activist and attorney, who told Maclean’s, “Bill de Blasio is a sellout. I wish I had a more polite way to put this, but New York is a s–tshow right now and de Blasio makes promises and rarely follows through.

“I believe New York leads the nation in homelessness. Black and brown communities are being sold out to real-estate developers. The only reason he got elected in the ﬁrst place was because his son had an Afro and he made a commercial that said he was afraid what the police might do to his son, and this won him the black vote.”

“Why were the cops there alongside you?” Newsome was asked.

“The police believe that he’s on the side of the streets against them,” the activist replied.

“The only reason de Blasio has a chance is that he’s trying to con America that he is a friend of black people,” Newsome went on. “Americans are so hypocritical, they might think, ‘If we elect a biracial couple into the White House, the message to the world is Donald Trump was a fluke—we’re so past racism that we have a white president and a black First Lady.’ De Blasio knows that being in a biracial marriage is a selling point in the age of Trump.”

As we spoke, Candidate 23 had putzed off to South Carolina, where he called Donald Trump “just a schoolyard bully,” and then to Iowa, to which most New Yorkers reacted, “Where the hell is Iowa?”

And still the heathens guffawed. “After 12 years, today was the ﬁnal episode of The Big Bang Theory,” late-night host Jimmy Fallon snickered. “Don’t worry, it was also the beginning of a brand new comedy, Bill de Blasio’s Presidential Campaign.”

The aspirant brushed off the blasphemy. “I think this is something to understand about me and my candidacy,” de Blasio said. “Mayor of the largest, toughest city in America. I have been for six years. Late-night comics don’t bother me. To me, that’s a walk in the park.”