Can Chrystia Freeland talk some sense into the Americans?

Allen Abel reports from the U.S. Capitol, as Canada's foreign minister (and 'Diplomat of the Year') makes a desperate plea for U.S. restraint 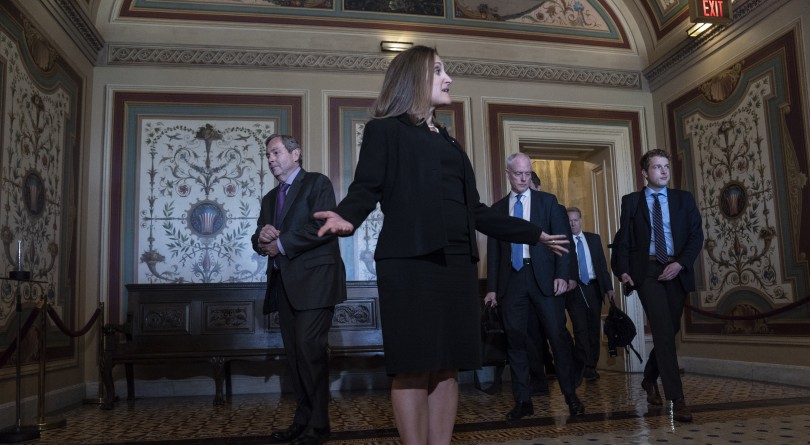 Foreign Minister Chrystia Freeland delivers remarks to the press prior to a meeting with members of The Senate Foreign Relations Committee in the U.S. Capitol on June 13, 2018 in Washington, DC. (Photo by Toya Sarno Jordan/Getty Images)

Still amicable enough to jointly host the World Cup soccer tournament with the bad hombres of Mexico, but poised at sabre-point over gherkins, catsup, liquorice, quiche and “spent fowl other than in cans or glass jars,” Canada and the United States careered Wednesday toward giving President Donald Trump a unique, man-who-has-everything gift: a beautiful war on his very own birthday.

With only hours remaining before the 72nd star-spangled commemoration of Trump’s delivery—June 14, perhaps not coincidentally, is Flag Day in the U.S.—Canadian Minister of Foreign Affairs Chrystia Freeland made a desperate flight to Washington to plead privately for restraint with members of the Senate Foreign Relations Committee and to accept an award as Foreign Policy magazine’s Diplomat of the Year.

“We’re friends, we’re neighbours, we’re very often relatives,” said Freeland, whose trip came as a direct snub to the Toronto Star, which preached on Monday that “the moral case for not taking a vacation in the U.S. is stronger than ever.”

What has gone south, of course, is the Canada-U.S. relationship, at least at the highest levels, with PM Justin Trudeau labelling Trump’s “national security” excuse for imposing tariffs on Canadian aluminum and steel “kind of insulting” and Trump responding on Twitter that Canada’s head of government is “very dishonest & weak.”

“The Government of Canada believes that ad hominem attacks are not the way to go about foreign policy,” Minister Freeland told reporters after meeting in an ornate chamber of the U.S. Capitol with senators from both parties, all of whom voiced dismay, regret and embarrassment at the president’s punitive policies and fat-fingered personal put-downs and their utter inability to do anything about them. Canada’s retaliatory levies on dozens of products ranging from nut purée to steel ingots to sleeping bags, scheduled to go into effect on Dominion Day, have been imposed “more in sorrow than anger,” she sighed.

The notion that the metallurgical bounty of Canada—“of all the countries in the world”—had been designated by Trump to be a threat to the security of the United States was “frankly absurd,” not to mention palpably illicit under NAFTA and World Trade Organization rules, Freeland said.

“The answer is very simple,” she iterated. “The U.S. has to remove these unfair and illegal tariffs.”

Minister Freeland met little, if any, opposition from the assembled senators, who were chaired by the lame-duck Republican of Tennessee whom the president calls “Liddle” Bob Corker. Corker, who is not running for re-election, has been a burr in Trump’s side for months, with the border brouhaha merely the latest in a long series of kindergarten snubs and imprecations.

“There’s no process,” Corker complained Wednesday, referring to Trump’s curious, spurious invocation of “national security” as his reason to slew-foot America’s humble northern ally. “The president just wakes up one day and decides to tariff a country.”

(Corker’s outburst came the day after the defeat—by his own party—of an amendment he authored that would give Congress a say in the imposition of tariffs for national-security reasons. The proposal having failed, the Tennessean then accused his Republican colleagues of drinking Trump’s Kool-Aid in a “cult-like situation” and charged that they were too timorous “to poke the bear.”)

On Wednesday, the U.S. president was reported to be slumbering at the White House as Freeland arrived at the U.S. Capitol, Trump having just returned from achieving peace in our time—except for peace with Canada, of course; also, with every other Western democracy —with a refuelling stop, perhaps not coincidentally, at Pearl Harbor.

Seventy-seven years earlier, in a chillingly similar chain of events, Japanese ambassador Kichisaburo Nomura had presented the U.S. government with a letter outlining its prescription for co-existence in Asia, only to be rebuffed by Secretary of State Cordell Hull’s sneer that “I have never seen a document that was more crowded with infamous falsehoods and distortions on a scale so huge”—Hull really did use the word “huge”—”that I never imagined until today that any Government on this planet was capable of uttering them.”

Wednesday evening, honored at a swanky Georgetown hotel, Freeland invoked the legacies of Abraham Lincoln and Ronald Reagan and told Americans that “the idea that we could pose a national security threat to you is more than absurd, it’s hurtful.”

Trump’s tariffs, she said, “are protectionism, pure and simple—a naked example of America putting its thumb on the scale in violation of the very rules it helped to write.”

“Canada has no choice but to reciprocate dollar for dollar and we will do so. We will not escalate. And we will not back down.”

Should diplomacy fail once again in 2018, two factors seemed to indicate that the annihilation of Canada might not be “a mere matter of marching,” as Thomas Jefferson predicted at the start of the War of 1812.

The first glimmer of hope for Canada was that the Federal Bureau of Investigation is scheduled to deliver its final report on the email scandal involving the Hillary Clinton on Thursday morning, a shiny object that is certain to distract the president from personally leading a cavalry charge against Prince Edward Island, not to mention all those birthday festivities.

The second was the sorry state of U.S. military preparedness, despite Trump’s frequent and noisy proclamations to the contrary, such as when he told the Class of 2018 at the Naval Academy two weeks ago, “You are now leaders in the most powerful and righteous force on the face of the planet. The United States military. And we are respected again, I can tell you that. We are respected again.”

On the contrary, one member of the House of Representatives—and of Trump’s own party—said Wednesday, some segments of the Trumpian militia are literally—and fatally—falling apart.

“We are experiencing a crisis in military readiness brought on by years of continuous combat operations combined with deferred modernization, lack of training hours, and aging equipment,” Rep. Mike Turner, Republican of Ohio and Chairman of the House Armed Services Subcommittee on Tactical Air and Land Forces, admitted to a congressional hearing on Wednesday morning. “The alarming number of aviation accidents just in the past three months reveals how deep the damage goes and the magnitude of the task of repairing and rebuilding our capabilities.”

Indeed, moments after Freeland left the Capitol en route to receive her award, dozens of senators, congressmen, aides and uniformed gendarmes proceeded down to the building’s atrium to attend a ceremony marking the 243rd birthday of the United States Army.

Here, too, the reputed decrepitude of the American war machine was lamented, with Sen. James Inhofe, Republican of Oklahoma, complaining that the fraction of internal revenue that his nation spends on military preparedness had shrunk from 50 per cent when he was an Army private in the 1960s to 15 per cent today.

“There are some systems that America isn’t Number One in anymore,” Inhofe moaned incredulously.

In equal ingots of newly minted disbelief, Canadians looked toward their insufficiently defended border Wednesday with trepidation as the tariff crisis, the Donald’s fete, and the first northbound blitzkrieg since Crysler’s Farm and Châteauguay mobilized down south.

“What I am hearing from Americans is that, ‘we just want to let you know that we really like Canada,’ ” Freeland said, quoting her bulging inbox. But this sentiment may not be enough to halt the commander-in-chief and his Congressional cult.

“Hold on!” James Inhofe cried to his fatherland’s armies, mobilizing in the North Dakota wheatfields and the piney woods of Maine. “Help is on the way!”