Can 'creative thinking' save NAFTA?

At a cabinet retreat, Chrystia Freeland promises to try new ideas at the next NAFTA bargaining session 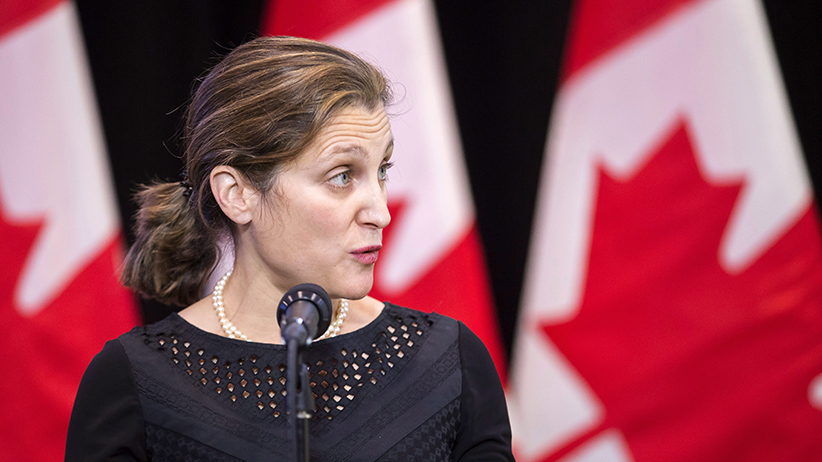 Foreign Affairs Minister Chrystia Freeland speaks to the media as she arrives for the first day of a cabinet retreat in London, Ont., on Jan. 11, 2018. (THE CANADIAN PRESS/Geoff Robins)

When members of Justin Trudeau’s cabinet speak publicly, informed listeners tend to lean in and pay closer attention when Foreign Affairs Minister Chrystia Freeland is doing the talking. It’s not that she’s always exciting; it’s that she tends to choose her words so they mean something.

And so it was this morning when Freeland, on her way into a cabinet session in London, Ont., offered reporters an intriguing wrinkle in her answer to the inevitable questions about whether U.S. President Donald Trump might be preparing to walk away from those all-important NAFTA talks.

After offering a variation on her customary, crisp language about how Canada brings facts to the bargaining table and relies on a rules-based international trading order, Freeland promised something novel at the next session of NAFTA talks, the sixth sit-down of the renegotiations foisted on Canada and Mexico by Trump, slated for Jan. 23-28 in Montreal.

READ MORE: Inside Canada’s plan to save NAFTA

“We think it is absolutely possible if there is good will on all sides to have a positive outcome in Montreal,” she said. “And when it comes to the more unconventional U.S. proposals, we have been doing some creative thinking. We’ve been talking with Canadian stakeholders, and we have some new ideas that we look forward to talking with our U.S. and Mexican counterparts about in Montreal.”

She didn’t specify exactly which “unconventional U.S. proposals” Canadians officials are crafting creative rejoinders to, but there are plenty to choose among. Trump’s negotiators have demanded, for instance, rules that would require at least half of all parts in motor vehicles to be made in the U.S., and a “sunset clause” that would make NAFTA permanently fragile by dictating that it would terminate every five years unless all three countries renew it.

These are deal-breakers for Canada and Mexico. Freeland’s comment about fresh approaches provided a glimmer of light in the darkening mood gathering in advance of the Montreal bargaining. Reports that Canadian officials are bracing for Trump to pull the plug on the process before the end of January hit the price of the Canadian dollar and the stock markets earlier this week.

And relations between Canadian and U.S. negotiators going into Montreal have to be strained even further by news this week that Canada launched, without fanfare back in late December, a formal challenge at the World Trade Organization against Washington’s move to slap duties on Canadian softwood lumber, among other claims that Washington doesn’t play fair when it comes to trade.

Freeland said there’s no close relationship between the WTO action and the NAFTA talks. But U.S. Trade Representative Robert Lighthizer said this latest development will “only lower U.S. confidence that Canada is committed to mutually beneficial trade.”

RELATED: If NAFTA dies ‘all hell will break loose’

All this is unfolding as Trudeau crosses the country holding town hall meetings that his aides bill as a chance for him to talk up jobs and economic growth. The political reasoning behind the theme is obvious. Only last week, Statistics Canada reported that Canadian job creation in 2017 was stronger than in any year since 2002, dropping unemployment to its lowest rate in more than 40 years.

Normally, that would put the government in a glorious position to spotlight its economic credentials and tout future feel-good policies. Indeed, heading into the cabinet meeting in London, Finance Minister Bill Morneau took a stab at it.

Looking ahead to the 2018 budget he’ll deliver in a few months, Morneau spoke of measures around science and automation. He touched on questions around women and work that are so much in the news. “We’re going to be thinking about how we can make sure that women are successful in Canada,” he said, “so there will be an important gender lens in what we are trying to achieve.”

That’s topical enough that it might, on a typical day in economic news, feel like a top-tier policy matter. But here’s the thing: Canadian exports to the U.S. stood at $454 billion in 2016, about three-quarters of all Canada’s outward trade, accounting for roughly 20 per cent of this country’s economy, and NAFTA supports an estimated 3.4 million Canadian jobs.

So only one economic policy file has the aura of grave urgency around it as Trudeau aims to start 2018 by talking up jobs and growth. All that undeniably good news will fade to the background if NAFTA falls. With Freeland promising her negotiators will be playing their hand creatively in Montreal, the table stakes couldn’t be higher.