Maclean’s Bulldog, Sept. 7: Your daily rundown of what happened today on the U.S. campaign trail 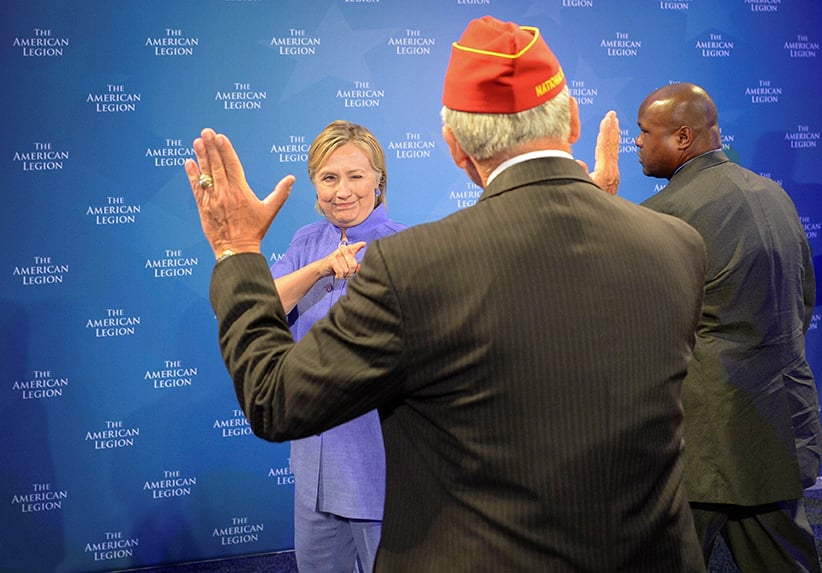 Sept 7, 2016: Our daily Bulldog election-campaign recaps return as the critical stretch of the U.S. election starts this week. On Wednesday evening, both Hillary Clinton and Donald Trump will be in New York for a forum to discuss military issues. Though they won’t appear on stage at the same time, both candidates opened up today about their foreign policy plans—and competed over how many former military leaders are backing their campaigns.

Donald Trump wants to build up the U.S. military as part of his pledge to achieve “peace through strength,” as he called it during a campaign stop in Pennsylvania. That strength would include bolstering the Army’s ranks to 540,000 troops, building a new missile defence system, boosting the number of Marine Corps battalions, and buying 100 additional fighter jets for the U.S. Air Force.

As a response to Trump’s many promises to rejuvenate U.S. forces, a Clinton-friendly super PAC released a negative ad titled “I Love War,” which features Trump quotes from the campaign trail. One example: “I love war, in a certain way.” Trump’s campaign responded that the quotes in the ad were presented out of context.

One day after Trump released an open letter of support from 88 retired U.S. military brass, the Clinton campaign responded with a list of 95 that supported her bid for the presidency.

For what it’s worth, the Washington Times ran an ad last year in which 500 retired generals and admirals endorsed Mitt Romney.

Trump’s plan to defeat ISIS? Give his generals a month.

Trump told Fox News last year that he has a “foolproof” way to defeat ISIS, and it was something he wouldn’t share because he wouldn’t want the enemy to know what’s coming. That was long before many people figured the reality TV mogul had a legitimate shot at the White House.

This week, Trump opened up about his foreign policy. He said that if elected, “[My top generals] will have 30 days to submit to the Oval Office a plan for soundly and quickly defeating ISIS. We have no choice.” Sounds simple enough.

The ads could play prominently in Florida, a state Trump will almost certainly need to win if he is to become president.

Trump first blacklisted the Des Moines Register after the newspaper published an editorial in the summer of 2015 advising him to drop out of the race. Over time, the list of media outlets blacklisted from joining the press corps at Trump’s events grew to include the Washington Post, Buzzfeed, Huffington Post, Univision, The Daily Beast and Politico. Trump never hid his disdain for reporters. “The political press is among the most dishonest people I’ve ever met,” he said earlier this year.

But on Wednesday, Trump finally eliminated the blacklist, which Washington Post editor Marty Baron had dismissed as “imprudent, pointless, and offensive from the start,” in a statement to Politico. Why the sudden change of heart from Trump? “I figure they can’t treat me any worse!” he told CNN.

For the first time since before the Second World War, the Dallas Morning News has endorsed a Democrat for president. The paper said that Trump’s values “are hostile to conservatism” and that he “plays on fear—exploiting base instincts of xenophobia, racism and misogyny—to bring out the worst in all of us, rather than the best.”

In endorsing Clinton, the paper stated: “We don’t come to this decision easily.”

Mike Pence is not a birther

After years of questioning whether U.S. President Barack Obama was actually born in America, Trump refused to address those so-called “birther” comments over the Labour Day weekend. But when Republican running mate Mike Pence was asked about Obama’s birthplace on Wednesday, he was concise. “I believe Barack Obama was born in Hawaii. I accept his birthplace.”

Remember the three dancing girls who performed a song-and-dance routine at a Trump rally in Florida in January? This might jog your memory:

The USA Freedom Kids, as they are called, went viral after the pro-Trump performance. Now they’re back in the news with a new message: they’re suing the Trump campaign.

In a suit filed in Florida, the group claims it forewent any payment for the performance in exchange for the right to sell merchandise at the event, but Trump’s team didn’t let that happen. The suit also alleges the girls travelled to Iowa in the hopes of a repeat performance; to their apparent dismay, the Trump campaign cancelled the follow-up routine—and offered no compensation. The Freedom Kids might consider adding a line to their viral song, Freedom’s Call, about the freedom to sue.