The AP says Hillary Clinton has secured the 2,383 delegates needed to become the Democrats' presumptive nominee 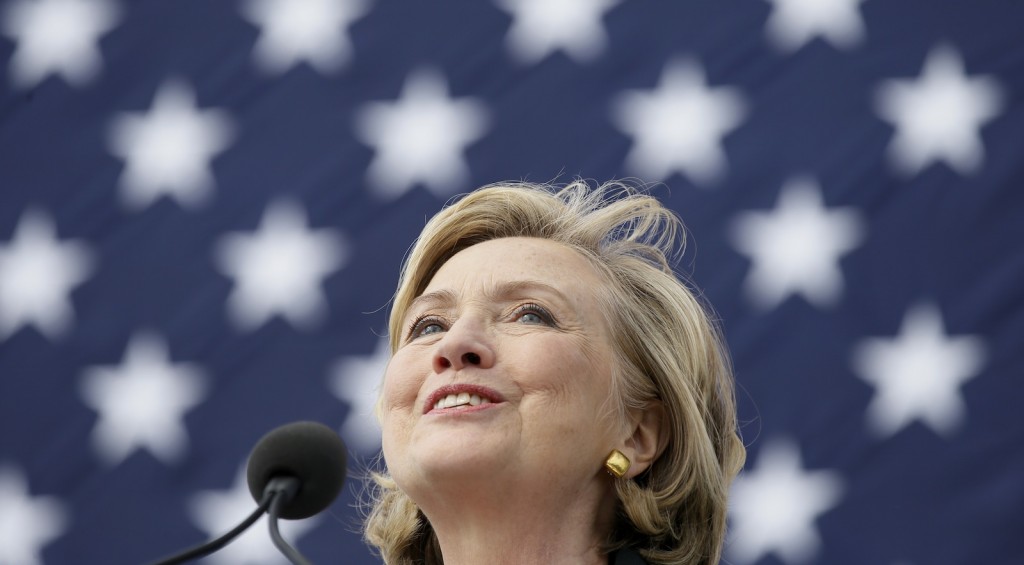 SAN FRANCISCO — Hillary Clinton has apparently broken a historic barrier, winning enough delegates to guarantee that she will become the first woman to lead a major American political party into a presidential election.

A tally by the Associated Press finds that the former first lady, senator and secretary of state has gathered enough elected and unelected superdelates to guarantee the Democratic nomination.

The news came a day early.

Clinton’s mathematical stranglehold on the nomination was expected to become crystallized Tuesday when six states vote in the last major set of primaries.

She wouldn’t claim the title yet.

“I’m obviously really excited about that. But I’m not letting myself focus on that yet,” Clinton said Monday, when asked about her apparent lock on the nomination.

“It’s been an incredible journey. And I will have a lot to say about it (later).”

The White House also suggested that President Barack Obama was awaiting Tuesday’s results to endorse her candidacy. His backing now would offer a touch of historical symmetry.

Eight years ago this week, Obama received an endorsement from his then-rival, Clinton; she suspended her campaign and urged supporters to back the young senator vying to become the first African-American president.

Clinton now seems mathematically assured to clinch her own place in history. She holds a lead of eight per cent among elected delegates, and barring a spectacular collapse in California, New Jersey and other states Tuesday, followed by a mass-defection of so-called superdelegates who back her, she’s won the nomination.

Her next challenge: Unify the party.

Clinton’s general-election poll numbers have slipped recently, thanks partly to resistance from progressive voters. Most tell pollsters they’d rally behind her; one-quarter say they wouldn’t.

Greg Elsten is an artist who used graphic images to illustrate his quandary. In cringe-inducing corporal terms, he described his feelings about being forced to choose between Clinton and Donald Trump.

“It’s either a slap in the face or the kick in the crotch,” he says. The silver lining here for Clinton? Elsten views her as the lesser of the two: “She would be the slap in the face.”

If absolutely forced to, he says he’d be willing to endure the facial sting of voting for someone he finds as cynical and shifty as Clinton. Maybe if he lived in a swing state like Ohio, and believed his vote necessary to shield America from a kick in the unmentionables in the form of President Donald Trump.

But he lives in solidly Democratic California. So he figures he can afford to write Sanders’ name into the ballot in protest — like he’s decorated the Uber car he drives with a Sanders sticker and button, and filled the back seat with pamphlets for passengers to read during their rides.

Sanders has indicated he plans to keep fighting.

Clinton will still need some superdelegate votes at the convention, unless she massively outperforms expectations Tuesday. The Vermont senator suggests he might seek to convince those party officials to back him at next month’s convention — even though she’s won more votes, more states, and more delegates.

Sanders supporters say something else might change between now and the July convention. Something like criminal charges being laid against their opponent.

The FBI is still investigating Clinton’s use of a home email server for work. Some are apparently holding out for police intervention: “We’re yet to hear the last of that, I hope,” said Kate Tanaka at a Sanders rally last week in Oakland.

Tanaka hasn’t voted Democrat in a quarter-century, not since Bill Clinton. She’s more recently supported either Ralph Nader or the Green party. Like actress-activist Susan Sarandon, she’s in the so-called “Bernie-Or-Bust” camp.

She wouldn’t vote for Clinton.

“Never, never,” Tanaka said. “I will go back to what I was doing before Bernie came along. I’d vote for (the Green party)… I don’t want Donald Trump, but I don’t want Hillary Clinton. I think she poses some really serious threats (too),” she said, referring to her hawkish military positions.

Others sound ready to hop aboard the Clinton bandwagon.

“As much as she’s not the person in the primary that I voted for, I have no problem voting for her as the party candidate,” said Timothy Egan of New Hampshire.

He predicted Sanders would ultimately back her too, because that’s the best way to retain some political influence and keep pushing the causes he cares about.

At a Sanders rally in California, Yelda Bartlett was unequivocal when asked whether she’d be able to switch to Clinton: “Definitely,” she said.

“I’m an immigrant. I’m Muslim. My family’s Muslim. I can’t vote for a demagogue (like Trump). It’s scary to me.”

Others are somewhere in the middle. Some Sanders supporters say they expect Clinton to adopt some of his policies — or add his name to the ticket.