Wiretap theories, a forthcoming legal challenge over a restaurant, and more from another busy day from the Trump White House 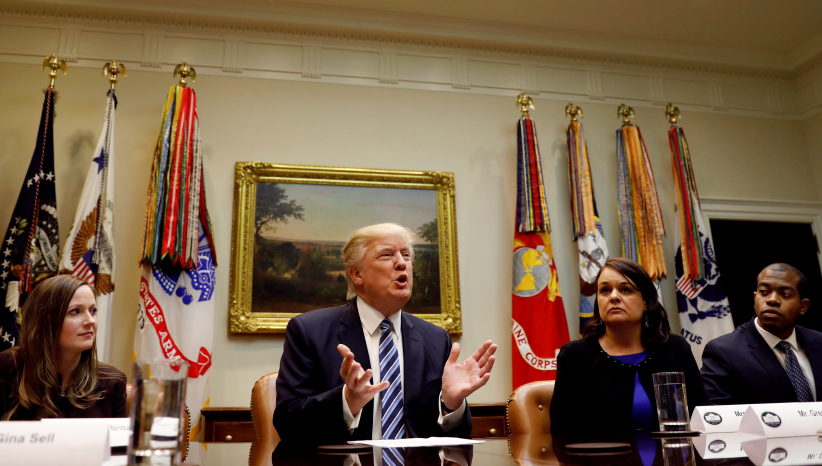 U.S. President Donald Trump speaks during a meeting about healthcare at the White House in Washington, U.S., March 13, 2017. Kevin Lamarque/Reuters

Donald Trump is notoriously litigious: in the 16 months following the June 16, 2015 announcement of his candidacy, he threatened to sue 20 times. This time, he’s on the receiving end of a legal challenge from the owners of Washington’s Cork Wine Bar. In a new op-ed in The Hill, they say the Trump International Hotel, a mile and change away, is “unfair competition” for their and others’ restaurants. Their suit rests on a clause in the property lease agreement preventing any elected official having an interest in the business occupying the space. “We’re not asking for any money. We’re simply asking the court to stop this unfair competition, as the Trump Hotel’s own lease requires.”

Have you checked the kitchen for bugs?

Kellyanne Conway may not have any evidence that the Obama administration wiretapped her boss, but she can list plenty of ways it might have spied on Trump. The President’s senior adviser’s survey of contemporary surveillance techniques, seemingly culled from a Wikileaks document dump, included “microwaves that turn into cameras.”

Pumping the brakes on efficiency standards

Trump will be near Motor City Wednesday, so reports say he’ll be meeting with Detroit automakers. One talking point: a review of vehicle efficiency standards. The EPA ruled in January that already-set 2025 fuel economy targets should stay in place; industry groups have asked for a do-over.

A line in the border sand

Congress needs to pass a spending bill by the end of April to avoid a government shutdown. That won’t happen if the Republicans try to slip cash for Trump’s border wall or the defunding of Planned Parenthood into the bill, cautions Senate Minority Leader Chuck Schumer.

Earlier this year, the Chinese government shut the gates on 111 golf courses, and members of the Communist Party were ordered to keep off the grass altogether. Clearly mindful that Xi Jinping wouldn’t be able to get a round in at home, Trump is planning to host his first bilateral summit with the Chinese president at Mar-a-Lago, conveniently located near some of Florida’s best links.