Daily Trump Tracker: The 'really bad dudes' do not abide 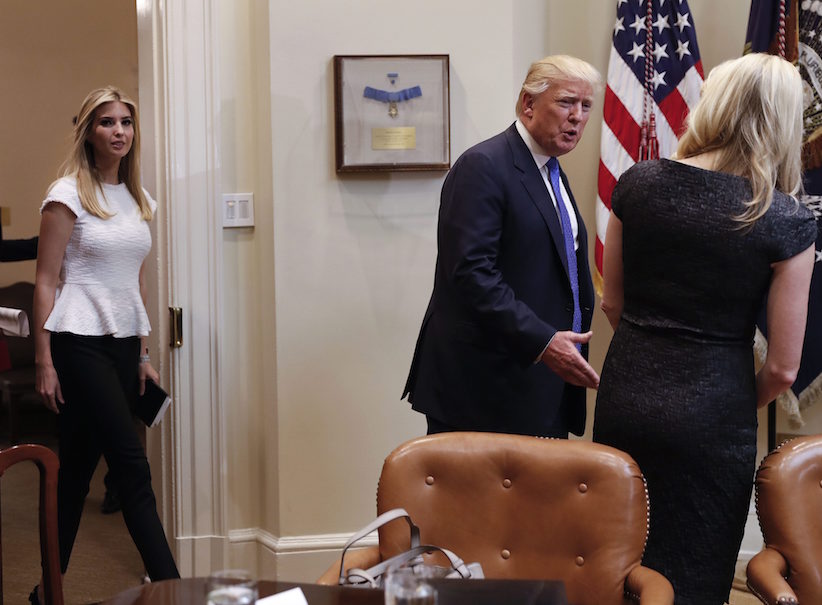 President Donald Trump talks with Kristen Short, as his daughter Ivanka Trump, left, arrives for a meeting on domestic and international human trafficking, Thursday, Feb. 23, 2017, in the Roosevelt Room of the White House in Washington. (AP Photo/Pablo Martinez Monsivais)

Trump upped the rhetoric on undocumented immigrants, calling efforts to remove them a “military operation.” The president insisted they’re focusing on getting rid of those with criminal records: “We’re getting gang members out. We’re getting drug lords out. We’re getting really bad dudes out of this country.” Trump later lauded John Kelly, the head of Homeland Security, the department overseeing the Immigration and Customs Enforcement agency—which as it so happens is not actually part of the military.

The hack and the blackmail

Hacked text messages obtained by Politico appear to show someone tried to blackmail Donald Trump’s former campaign manager Paul Manafort over allegedly setting up a meeting between Trump and Ukraine’s former president and Russian ally Viktor Yanukovych. Manafort confirmed the authenticity of the hacked texts, while Yanukovych said he’s never written any messages to Manafort and the whole thing is a hoax.

Replacing the idea of repeal and replace

During the election campaign, Trump touted that he would “repeal and replace Obamacare.” And while his first day in office included an executive order to “ease the burdens” of the Affordable Care Act, the prospect of a complete repeal and replace is “not going to happen,” said former Republican House Speaker John Boehner at a health care conference on Thursday. Boehner said there would be modest changes, but any suggestion of a quick, large-scale overhaul is just “happy talk.”

A dozen (or more) wrongs don’t make a right

One of the front runners to become Trump’s ambassador to the European Union, Ted Malloch, is in a heated war with the the Financial Times, who reported on handfuls of false claims in Malloch’s autobiography and online CV, including his claim that he had an “ambassadorial level” position at the United Nations (he didn’t); that his documentary Doing Virtuous Business was Emmy-nominated (it wasn’t), that he’s written extensively for the New York Times and Washington Post (he’s never written for either one of them), and that he was a fellow at two colleges at Oxford University (nope and nope).

Malloch refuted much of the reporting in an op-ed for Breitbart and in an interview with BrexitCentral.com, adding he pitched an op-ed to the Financial Times that he claimed was declined because “they would not under any circumstances print it because it was contrary to their pro-EU policy.” Turns out that was also untrue; the FT editor he contacted told him op-eds weren’t her responsibility, so BrexitCentral.com issued a retraction and an apology for the error.

Who do you trust?

Trump may call media the “enemy of the American people”, but a new Quinnipiac University poll found that 52 per cent of Americans find the media more trustworthy than Trump, compared to 37 per cent who said they trusted the president more than the media.

But after botching last year’s election predictions, who’s to say these pollsters can be trusted?