A visit from Israel's prime minister and fallout from a story on Russian contacts, in another newsworthy day from the Trump White House 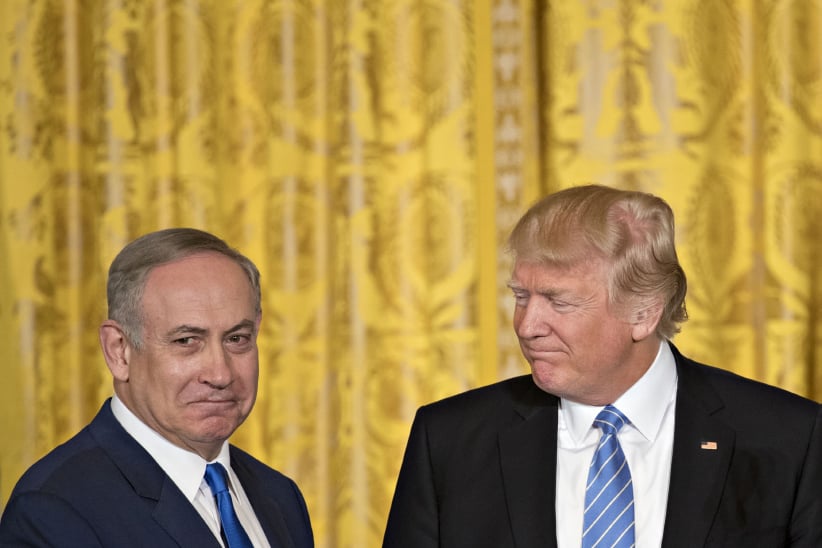 U.S. President Donald Trump, right, looks towards Benjamin Netanyahu, Israel’s prime minister, during a news conference in the East Room of the White House in Washington, D.C., U.S., on Wednesday, Feb. 15, 2017. Netanyahu is trying to recalibrate ties with Israel’s top ally after eight years of high-profile clashes with former President Barack Obama, in part over Israel’s policies toward the Palestinians. (Andrew Harrer/Bloomberg/Getty Images)

President Trump met with Israeli Prime Minister Benjamin Netanyahu for their first official meeting as world leaders, where Trump appeared to be indifferent on whether Israel and Palestine found a one- or a two-state solution, a departure from two decades of diplomatic playbooks. As for Israel continuing to build Jewish settlements in land currently claimed by Palestinians as theirs, Trump offered a slight rebuke to Netanyahu: “I’d like to see you hold off on settlements for a little bit.”

In response to a New York Times story that reported that Trump’s aides were in repeated contact with Russian intelligence during the presidential campaign, Trump called it everything from conspiracy theories to an attempted cover-up for Clinton’s election loss. He added that purported phone records and intercepted calls constituted classified info being illegally given out by the intelligence community. He wasn’t so upset, of course, when illegal leaks hurt Hillary Clinton’s camp.

The real scandal here is that classified information is illegally given out by "intelligence" like candy. Very un-American!

MORE: Scott Gilmore on the best-case scenario for the Trump team on Russia (is still bad)

Trump aide Stephen Miller has said that “the president’s powers here are beyond question” and has called federal court judges blocking Trump’s controversial travel ban a “judicial usurpation of power.” But Senate Majority Leader Mitch McConnell is not of the same mindset—even if they are on the same Republican team. “Under the Constitution, all of our actions are subject to judicial review,” McConnell said Wednesday. Someone should tell Trump’s aide that.

How to turn a question about anti-Semitism into election-victory bragging: a transcript

Trump: Well, I just want to say that we are, you know, very honoured by the victory that we had: 306 electoral college votes. We were not supposed to crack 220. You know that, right? There was no way to 221, but then they said there’s no way to 270. There’s tremendous enthusiasm out there. We are going to have peace in this country.