Donald Trump congratulates himself for ending a shutdown he started

Will it last, asks Allen Abel, or will Trump use the last bullet in his revolver to shoot himself in the foot? 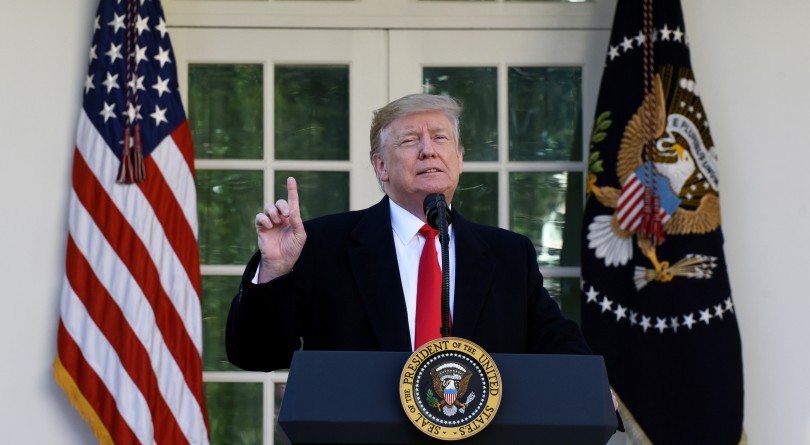 Grounding New York City’s LaGuardia Airport for less than an hour proved to be too much for Donald Trump to endure on Friday—not the arrest of his mendacious old spear-chucker; not the Congressional investigation of his own son-in-law’s security clearance; not his oblivious-billionaire secretary of commerce who can’t understand why unpaid breadwinners need to queue for bread; not even Sen. Elizabeth (Pocohontas) Warren’s proposed wealth-tax on such deadbeat Daddy Warbucks as The (oft-bankrupt) Donald purports to be—none of that was enough for the president to re-open the United States Government.

But then, a few jets jostling on his hometown tarmac jolted the president to an action he could have taken five weeks and two million missed paycheques ago: namely, the temporary revivification of the federal bureaucracy while, in theory, suddenly-fraternal Democrats and Republicans in Congress reach a permanent agreement to build a Huge Wall of America along the Mexican frontier. February 15th is the new drop-dead date.

In December, Trump had crowed that he would be proud to black out a few ministries in order to force the Democrats to finance the wall he long has promised will keep caravans of desperate families from reaching their Promised Land. Then, on Friday, the president shifted into reverse.

“I am very proud to announce today that we have reached a deal to end the shutdown and re-open the federal government,”  the president cawed in the Rose Garden on a chilly, sunny, unnecessary afternoon, brandishing his beloved D-word, while failing to acknowledge that he had just accepted the totality of the same arrangement that Speaker Nancy Pelosi and Senate Minority Leader Chuck Schumer offered him four weeks ago and that he had rejected ad hominem and ad feminem over and over and over again.

RELATED: It’s Day 26 of the shutdown and U.S. government workers are lining up for food

“After 36 days of spirited debate and dialogue, I have seen and heard from enough Democrats and Republicans that they are willing to put partisanship aside, I think, and put the security of the American people first,” Trump uttered, without naming any of them, congratulating himself three hours after the aeroplanes of Gotham started flying again. Two weeks ago, Senator (and Trump-train caboose) Lindsey Graham had floated the identical proposition, with one fatal flaw: the South Carolinian didn’t try to convince Donald Trump that it was Donald Trump’s idea.

LaGuardia, which is located just a few blocks from Trump’s boyhood mansion in the Borough of Queens, had announced a full “ground stop” at 10 a.m., citing the large number of air-traffic controllers who had called in sick after missing their second bursary of the five-week shutdown. Flights resumed at the country’s 21st-busiest landing strip, with significant delays, an hour later, though this was too late to relaunch the president’s eponymous Trump Shuttle, a Washington-New York-Boston service that went broke 27 years ago.

Eagerly awaited after Trump’s oration were Ms. Pelosi’s personal reaction, the temperature of the furthest-left flank of her Ocasio-nally defiant caucus, and the state of next Tuesday’s State of the Union address, which the Speaker gleefully had expunged from the calendar in yet another stroke of ball-busting parliamentary brilliance.

“The president has agreed to our request,” Sen. Schumer smiled at the Capitol on Friday afternoon, twisting the knife even deeper.

Moments after Trump, who had demanded $5.7 billion for his “not a medieval wall,” settled for $0.00 instead, conservative agitator Ann Coulter just tweeted “good news for George H.W. Bush. He is no longer the biggest wimp ever to serve as President of the United States.”

Good news for George Herbert Walker Bush: As of today, he is no longer the biggest wimp ever to serve as President of the United States.

Dozens of resilient news-hawks—not to mention his own tone-deaf cabinet and a passel of mayors from around the country who had been invited to, then booted from, a parley in the White House—shivered in the mud and leaf-litter of the Rose Garden Friday while Trump finalized the wording of his white-flag address.

A Maclean’s correspondent perched in the permafrost watched Trump deviate several times from the prepared remarks that scrolled on a video screen, riffing ad lib on the “tough, mean, sadistic” criminals who have been violating American territory, and regaling us yet again with his bondage fantasy of women with duct tape on their mouths and faces being coyoted across the fence-less frontera.

“No border security plan can never work without a physical barrier,” he added, flogging a horse that died in the midterm elections, if it ever truly lived at all.

“It just doesn’t happen,” Trump said. Neither does it happen that a divided Congress gives a president whatever he wants.

Trump’s capitulation came 38 years after Ronald Reagan abruptly dismissed more than eleven thousand unionized air-traffic controllers after they refused to end a two-day strike. (Trump is not the only caliph with the words “You’re fired” in his vocabulary. Also, Reagan’s campaign slogan in 1980 was “Let’s Make America Great Again.”)

Neither in the Great Communicator’s heyday, nor at the stymied LaGuardia, Newark and Philadelphia airports on Friday, did planes fall from the sky. This time, all that was plummeting was Trump’s approval rating among the unravelling travelling public.

It has not been a great week for the Great Detonator. Even before his shutdown stand-down, his old ally Roger Stone had been arrested in Florida and charged with lying to Congress, among other crimes; a House committee chairman announced his plan to investigate why Jared Kushner, the husband of First Daughter Ivanka Trump, received top-secret clearance even after the FBI recommended that it not be granted, and Commerce’s Wilbur Ross voiced his incomprehensible incomprehension that furloughed feds might not be able to dip into their trust funds to fund their own food.

“You are fantastic people,” Trump said Friday, smacking down Secretary Ross and addressing the 800,000 men and women who have not been paid since Christmas. “You are incredible patriots.  Many of you have suffered far greater than anyone, but your families would know or understand.”

For Trump, whose agenda-setting life span already is being eclipsed by the 2020 campaign’s preternatural kickoff, the entire affair has proved to be a lose-lose proposition. On Thursday, six members of his own party’s Senate majority defected to endorse a Democratic attempt to temporarily re-open the affected departments. Twenty-four hours later, the president did exactly the same thing.

RELATED: Will a federal government shutdown damage the U.S. economy?

“We want to go through the system. We have to have a wall in this country,” Trump said. Then, after pretending since Christmas that the furloughs were a Schumer-Pelosi confection, the president ended his scattershot remarks by trotting out the old, lame warhorse of declaring a national emergency, which would force another shutdown, which would send the same 800,000 airport wand-wavers, national-park campfire wardens and spinach-salmonella inspectors onto the streets yet again.

“If we don’t get a fair deal from Congress, the government will either shut down on Feb. 15 again or I will use the powers afforded to me under the laws and the Constitution of the United States to address this emergency,” the president said, though any emergency declaration immediately would by struck down by some left-leaning court of appeals. But such an eventuality wouldn’t be the first time that The Donald uses the last bullet in his revolver to shoot himself in the foot.

Meanwhile, the payless will be paid and peace shall reign, at least through Groundhog Day.

“I think we have a chance, yeah,” the president told a group of partisan Hispanic pastors, later in the day. “I think we have a good chance. We’ll work with the Democrats and negotiate and if we can’t do that, then we’ll do a—obviously we’ll do the emergency because that’s what it is. It’s a national emergency.”