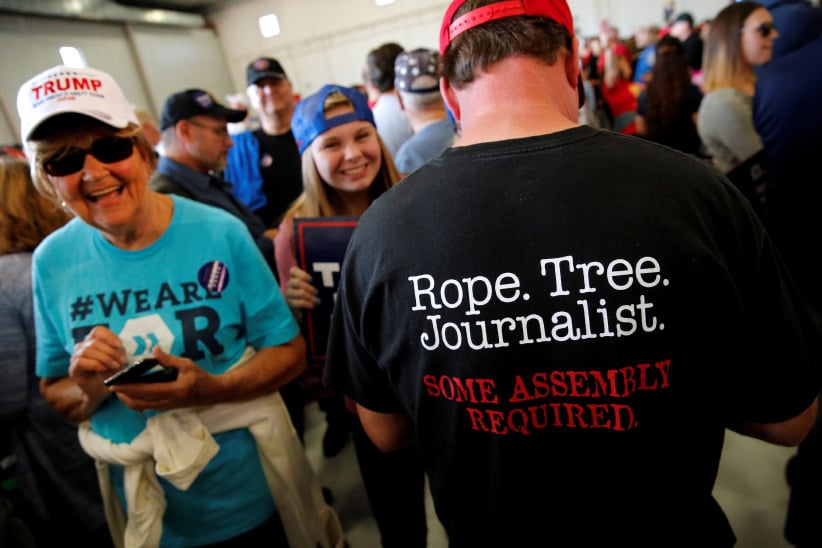 There are few rights more sacred to democracy than freedom of speech. Indeed, the ideas that underwrite our commitment to the notion that one ought to be able to express themselves without threat from the state or the government track closely with democracy as a way of organizing collective life going back to at least the Ancient Greeks.

In the modern era, free speech has become entwined with the right to a free press. The press plays several roles in contemporary democratic societies: it obtains and distributes information about economic, social, and political life that individuals would otherwise be unable to get for themselves—without great and prohibitive difficulty, at least. The media act as conveyors of opinion (for the purposes of argument) and context (for the sake of understanding). Our ink-stained and computer-strained journalists hold power to account—not just state or government power, but also economic and social power. Taken together, the media become facilitators of checks and balances, civic discourse, democratic empowerment, and general education. So, when President Trump attacks the press, he is attacking free speech and perhaps freedom itself.

The right to speech is meaningless unless it is underwritten by a public that knows things—that is, an educated public. For the people to hold power to account, they must be aware of what their leaders are up to and they must know for themselves what they prefer those folks be up to and why. Thomas Jefferson captured the spirit of this sentiment when he suggested, “If a nation expects to be ignorant and free in a state of civilization, it expects what never was and never will be.” A second line of the quotation, attributed to Jefferson but unlikely his own words, continues “If we are to guard against ignorance and remain free, it is the responsibility of every American to be informed.”

When the president attacks credible news sources as “fake news” and calls them the “enemy of the American people,” he encourages his mob of mouth-frothing supplicants to insult, dismiss, and even threaten members of the press. When he attacks journalists who challenge him, he undermines trust in the fourth estate and threatens free speech—at least the speech of those who disagree with him (also known as a majority of Americans). The impulse to dismiss the press as biased and propagandistic is authoritarian at its core. The practice is chilling.

It matters very little whether Trump is attacking the press as part of a deliberate strategy to extend his authority, to distract from his failures, or because he’s a narcissistic ass who can’t help himself—or some combination of the three. The effect of his attacks are serious and dangerous. There are malign influences surrounding the president who are prepared to seize their moment regardless of his intent. There are disaffected and angry mobs who support the man and are prepared to harass his “enemies” and their own no matter what Trump intends. And even if the current occupant of the Oval Office turns out to be a minor infection of the body politic, he might clear the way for a much more dangerous pathogen to follow him.

A clip from a 1962 interview with President John F. Kennedy has been making the rounds on the Internet lately. The president sat down for that chat in the Oval Office two years into the mandate he would never finish. Asked about the role of the press in the United States, Kennedy, who was still recovering from the sanguinary and failed Bay of Pigs invasion in Cuba, gritted his teeth and said, “Even though we never like it, and even though we wish they didn’t write it, and even though we disapprove, there isn’t any doubt that we could not do the job at all in a free society without a very, very active press.” He also cited the role of the media as an “invaluable arm of the presidency as a check really on what’s going on in [the] administration.”

More than three hundred years earlier, the English poet and polemicist John Milton responded to Parliament’s pre-publication requirement under the Licensing Order of 1643, which required that publishers obtain permission from the state and submit to registration prior to any printing, by writing Areopagitica. The name of the polemic was carefully chosen, drawing on the Areopagus, a hill in Athens used in Antiquity for various political matters (not always democratic). Milton was writing during the early days of the English Civil War, just as the form and substance of future government in much of the West was being shaped by bloodshed and argument. Ultimately, Milton, free speech and democracy prevailed.

Today we risk abandoning the legacy of the democratic tradition and the rights that have served as its guarantors for centuries. The demonization of the press has coincided with the rise of the euphemistically lazy “alternative media,” which tends to be little more than echo chambers for the disaffected, whether publications find themselves on the far right or the far left. While some of the messages that resonate within those chambers are perfectly fair, plenty are far from it and the effect (and one imagines, the intent) of their advancement has been to polarize and to create partisan battalions more intent on battle than debate. At the same time, because of the nature of how we seek out our news today, one no longer must contend with or even be exposed to an unwanted idea.

The fracturing of the media landscape by alternative publications, algorithms that “curate” newsfeeds for us, the proliferation of for-profit fake news, and the deployment of propaganda in the service of partisan interests has allowed Trump to mobilize his supporters against the “mainstream media.” Trump didn’t invent the tactic of declaring war on a “biased” press; he didn’t dream up fake news or propaganda or fringe news outlets. He has merely used them better than others have, as a master carpenter would use a chisel.

We thus face the confluence of several dangerous contemporary realities that leave us vulnerable to democratic retrenchment. The first line of defence against the erosion of democracy is unsurprisingly the one under the most vicious attack from those who would prefer to substitute their own partisan reality for the one we otherwise share; that line of defence is free speech supported by a free and robust press.

Neither a press nor free speech can exist in a contemporary mass democracy without the other. For those who are committed to resisting belligerent sectarianism and leaders like Trump who demonstrate authoritarian tendencies, the troubling news is that our words and arguments and ideas are under attack; the encouraging news is that they remain, as they have for decades, among our most effective means of resistance.

FILED UNDER: Donald Trump freedom of speech media the press