Donald Trump is losing his fight against Stormy Daniels

Every day more details are unzipped in the saga of the U.S. president and his liaisons with women—and it's beginning to take a serious toll 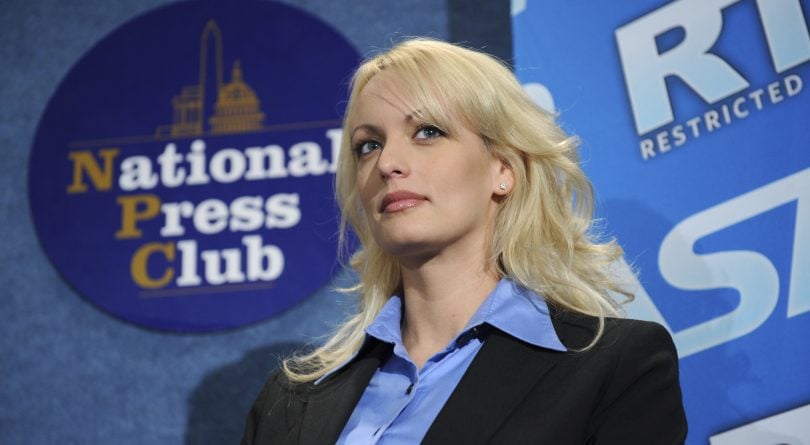 Stormy Daniels appeared at a news conference on May 29, 2008, to tout the success of the Restricted to Adults (RTA) website and other efforts by the adult film industry to protect children from inappropriate material. (Photo By Tom Williams/Roll Call/Getty Images)

She’s not usually known for begging for money, but here is the torrential Stormy Daniels, née Stephanie Clifford, on the cyber-panhandling site crowdjustice.com, appealing for contributions so that, in her words, she can “speak honestly and openly to the American people about my relationship with now President Donald Trump.”

“First, this money is not going to me personally,” the actor, director, pole dancer and reputed pre-presidential lower-case playmate goes on. “Ever.”

“Second, if you donate, your donation merely appears as a donation to “Crowd Justice” on your bank or credit card statement.  There is no reference to Stormy Daniels or Stephanie Clifford.”

The pornographist’s appeal already had brought in US$268,940 at press time. But should the scales of justice eventually tip against the clever Clifford/Daniels, who avers that she enjoyed consensual friendship-with-benefits with Trump shortly after Melania gave birth to son Barron in 2006, she may need every dollar that her eleemosynary plea can implant. Threatened by Trump’s legal team with a counter-fine of $1 million per utterance, she quickly could find herself as bankrupt as a Trump casino.

HOW THE STORMY DANIELS SCANDAL COULD BRING DOWN TRUMP, bellowed Rolling Stone.

In 2011, Daniels starred in a bondage scene with a lie detector and was proved to be telling the truth about the affair. This Sunday, a much-ballyhooed interview on 60 Minutes may or may not reveal more of her than has been bared previously. It has even been hinted that photographs or videos of Trump’s own unprotected goldmember may be part of the trove.

(“The publicity gradually dehumanizes you,” Trump complained in 1990 in a book entitled Trump: Surviving At The Top. “To many people, Donald Trump isn’t a flesh-and-blood human being anymore. Instead, I’m a symbol–of wealth, fame, egotism, greed, and probably several other not-so-nice things . . . Reality never seems to get in anyone’s way.”)

On Tuesday, for example–Barron’s 12th birthday!–former upper-case Playboy Playmate Karen McDougal sued the president in California, alleging that a payment of US$150,000 that McDougal received from the publisher of The National Enquirer in 2016 was part of “a multifaceted effort to silence” her.  An attorney for McDougal, who never has claimed that her romps with Trump were anything but consensual, stated: “We intend to invalidate the so-called contract . . . imposed on Karen so she can move forward with the private life she deserves.”

“No one is above the law,” Judge Jennifer Schecter of the Empire State’s supreme court wrote, echoing Spencer Tracy in Adam’s Rib (and Barack Obama on FOX News when asked about a possible prosecution of Hillary Clinton for her email irregularities). The opinion affirmed the litigious rights of an Apprentice contestant named Summer Zervos, who alleges that Trump grabbed her, kissed her, and rubbed himself against her against her will. While campaigning for the White House, Trump repeatedly called Zervos—and numerous other accusers—a liar, a word that carries substantial legal weight.

“Nothing in the Supremacy Clause of the United States Constitution even suggests that the president cannot be called to account before a state court for wrongful conduct that bears no relationship to any federal executive responsibility,” the New York judge decreed. Should Zervos prevail in court after the inevitable years or decades of appeals and delays, Trump may find himself as exposed as Stormy Daniels.

“Trump’s lawyers were trying to use executive privilege in a new way and they lost,” says Justin Vaughn, professor of political science at Boise State University in Idaho and the creator of many of those presidential rankings that usually have placed James Buchanan at the bottom of the heap, at least until The Donald came along. (Trump hit rock-bottom in the most recent poll of historians while Barack Obama, previously mired at a mediocre 18th, rocketed to number eight just by comparison.)

“Bill Clinton’s team tried to make the same case and they failed to keep him out of the federal court system,” Vaughn tells Maclean’s. “Trump argued that it’s a different matter in a state court, which is not only a terrible argument that he’s destined to lose, and not only bad for Trump in the short term, but if you take all the salaciousness out of it and just look at the institutional consequences, it makes it harder for any president to claim executive privilege in the future.”

“The Zervos case is full steam ahead and Trump will absolutely have to give a deposition,” predicts Barbara McQuade, professor-by-practice and lecturer in civil and criminal law at the University of Michigan and one of the 46 federal attorneys whom Trump dismissed when he took office. (During her 8-year tenure as U.S. Attorney for the Eastern District of Michigan, McQuade successfully prosecuted the city’s mayor and the “underwear bomber” who tried to set off plastic explosives in his own briefs aboard a jet airliner, among many other high-profile fraud and terrorism cases.) “It was at this stage in Bill Clinton’s case that he had to tell the truth about Monica Lewinsky. Given Donald Trump’s history with the truth, this could be very significant.”

“They could also ask him about other women, which also happened to Clinton. In the context of the Zervos case, if they are trying to establish a pattern of behavior, they could ask about Stormy Daniels, about Karen McDougal, so I think that this could be a place rife with peril if he lies under oath.”

“The other thing that could be interesting for those who say ‘I don’t really care about his personal life because I always assumed the worst anyway’ is that it’s not about the sex, it’s the hush money,” Prof McQuade adds. “If there is a pattern of him concealing that behavior, could this be obstruction of justice? They could allege that when things go bad and he wants them to go away, he throws money at it and he persuades people to be quiet.”

“Politically and legally, it would be tough to punish Trump for having these affairs 10 years ago,” agrees Justin Vaughn. “Even the evangelical leaders gave him a pre-presidential mulligan. But if we learned anything from Richard Nixon, it’s that it is not the crime, it’s the cover-up. What could be more problematic is not that he had these affairs, but that they’re engaging in legal actions to keep information out of the public realm, which in the long run usually fails.”

“When you look at Stormy Daniels, what do you see?” Prof. Vaughn is asked. “I think that she and her attorney have been pretty successful in controlling the narrative so far and getting her message out through the mainstream media,” he answers.  “I don’t know if they are doing everything right or if Trump’s team is doing everything wrong.”

“Nobody elected Donald Trump because he’s a moral paragon,” Vaughn reasons. “If this was Jeb Bush, it would have ended his presidency by now. But there’s got to be a tipping point somewhere. I have a friend, a long-time Republican, who told me that she won’t allow her kids to watch the news anymore. At a certain point, even if he’s the leader of your team, if you can’t let your kids watch the news, there’s got to be a red line somewhere. I’m surprised we haven’t got to it yet, but it’s got to be coming.”

The singular absence of allegations of moral turpitude during the Obama years may have led some younger observers to view the current chief executive especially harshly. But Donald Trump is far from the only president to have dallied extra-maritally before or even during his tenure; the sordid history runs from John Kennedy’s trysts with Marilyn Monroe to Warren Gamaliel Harding, who referred to his penis as “Jerry” in torrid letters to his long-time paramour.

“Do I think I could get elected?” Trump mused in 2011 in a book entitled Time To Get Tough: Making America #1 Again. “At one time I would have said yes, probably. But now, since my marital problems have been dragged through the newspapers, I’m less sure.”

“It all comes down to whether the House flips to the Democrats,” says Barbara McQuade. “At what point does the House, even the Republicans, get tired of his act? But if it turns out that someone’s personal life doesn’t impact his presidency, then none of this matters.”

Yet there is one person—publicly silent, regally postured, gamely suffering (if she indeed is suffering)—to whom these affairs and allegations must matter. Virtually invisible in public settings since Inauguration Day, and nearly always mute at ritual functions within the White House, Melania Trump First Lady emerged tentatively this week. But even while convening with representatives of social-media companies to kick off her long-delayed campaign against cyber-bullying, the First Lady was apologetic and demure.

“I am well aware that people are skeptical of me discussing the topic,” she said. “I have been criticized for my commitment to tackling this issue and I know that will continue, but it will not stop me from doing what I know is right. I am here with one goal: helping children and our next generation.”

(Compare this to Michelle Obama, who recently kicked off her first public appearance in more than a year—presenting an award to the school counselor of the year at the Kennedy Center—by proclaiming to a whooping, cheering audience, “I’m back!”)

Meanwhile, the sordid procession continues, with Stormy Daniels in the wings at 60 Minutes and mayhem in the West Wing under the most boyish, bizarre and boisterous administration in American history.

A few days ago, a Maclean’s reporter was walking toward the White House to attend the daily press briefing.

“Another day, another scandal,” the journalist muttered to one of the law-enforcement personnel who are stationed along Pennsylvania Avenue to protect the president from external menace, though not from himself, which may be the greatest danger of all to Donald Trump.

“It’s not a scandal,” the officer replied. “You gotta have shame to have scandal.”