Donald Trump may have emboldened hate in Canada, but it was already here

Canada saw a rise in right-wing extremism in 2017, from anti-Muslim flyer campaigns on university campuses to the presence of extreme right-wing groups 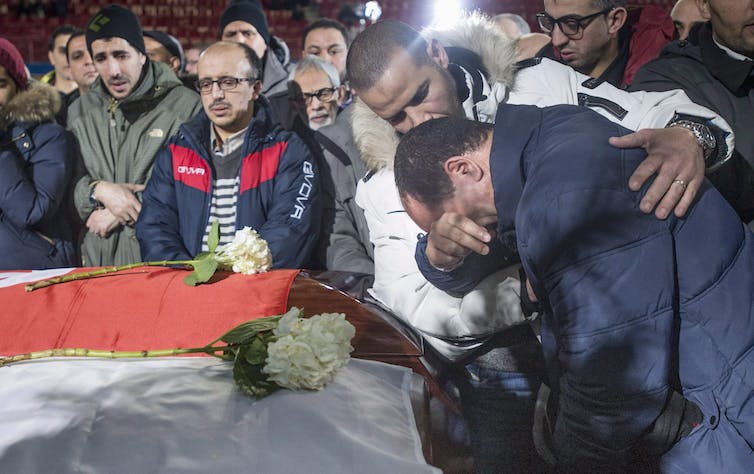 A man breaks down next to the caskets of three of the six victims of the Quebec City mosque shooting during funeral services in February 2017 in Montreal. THE CANADIAN PRESS/Paul Chiasson

Ryan Scrivens is a Horizon postdoctoral research fellow at Concordia University’s Project SOMEONE.

The world will not soon forget Nov. 8, 2016. It was the day billionaire and former reality-TV star Donald J. Trump was elected president of the United States.

To the dismay of many, Trump’s divisive politics won the hearts and minds of millions of American voters.

North of the border, Canadians scratched their heads and wondered how someone with such a hateful political platform — rife with overtly racist, xenophobic and sexist sentiment — could have been elected leader of the free world.

The general consensus was that such rhetoric could not — and would not — resonate with Canadians. Yet during his first year in the Oval Office, Trump’s hateful sentiments not only resonated with American citizens, but with some Canadians as well.

Canada saw a rise in right-wing extremism in 2017, from anti-Muslim flyer campaigns on university campuses to the presence of extreme right-wing groups such as Proud Boys, La Meute and the Three Percenters, as well as the slaying of six worshippers at a Quebec City mosque. 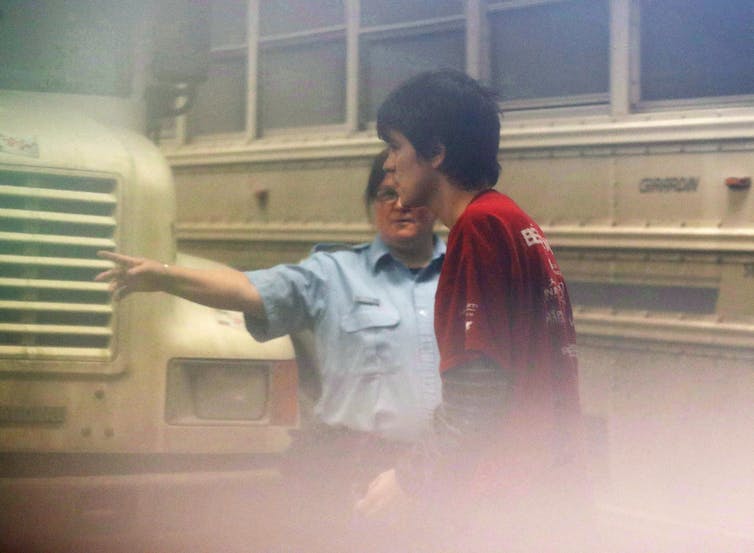 It should come as no surprise that Trump has had an impact on right-wing extremism in Canada. Significant media attention, both nationally and internationally, has been given to “The Trump Effect” in Canada. This has left Canadians with the impression that the current wave of hate is a direct consequence of Trump’s election victory.

Based on my experience as an academic who’s been studying Canada’s right-wing extremist movement for the past six years, I agree with most media claims. Trump’s right-wing populist and white nationalist political campaign has galvanized Canadian-based white supremacist ideologies, identities, movements and practices.

However, as Canadians, we must not place too much blame on a fear-monger south of our border; we should refrain from making sweeping claims that Trump is the reason why hatred is on the rise in Canada.

Instead, in reflecting on Trump’s impact on right-wing extremism in Canada, we must reflect on Canada’s social and political context in which radical right-wing ideologies reside, both prior to and during Trump’s first year in office.

In the days following Trump’s surprising win, communities across the U.S. experienced an uptick in activity by the radical right. This wave of hatred and bigotry had a trickle-down effect on our nation — Canada was not immune to Trump’s hateful political rhetoric. 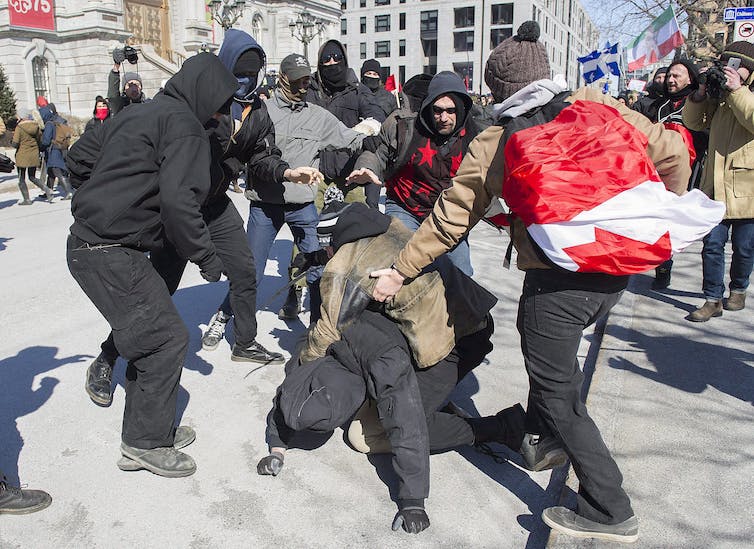 Opposing groups of protesters clash during a demonstration regarding the federal anti-Islamaphobia bill in Montreal in March 2017. THE CANADIAN PRESS/Graham Hughes

Canadian cities experienced an uptake in targeted hatred against visible minorities coinciding with the outcome of the U.S. election in the days, weeks and months following the vote: Racist graffiti and flyering campaigns, far-right patrols and rallies in city streets, and protests at border crossings, all in the name of “protecting” Canadian citizens from the “Islamic threat” — a sentiment that has also been expressed by Trump.

We also saw Canadians attend the “Unite the Right” rally — an event whose deadly turn was blamed on “both sides” by Trump — in Charlottesville, Va., and subsequent marches in Quebec City and Vancouver, hosted by Canada’s radical right in support of the Virginia rally.

But the most alarming act of racist violence in Canada following Trump’s win occurred on Jan. 29, 2017, when a 27-year-old white male entered a mosque in Quebec City determined to kill Muslims.

Equipped with a long gun, he murdered six Muslim men and injured 19 others while they prayed. The suspect was described by his friends as a moderate conservative who, over about a year’s time, became an apparent xenophobe and racist, one who overtly supported Donald Trump and far-right French politician Marine Le Pen.

For those who have not paid attention to right-wing extremism in Canada before Trump’s presidency, it would be easy to assume this wave of hatred started with Trump.

That would be a false assumption.

In 2015, Barbara Perry and I completed a three-year study exploring the internal and external factors that were most likely to give rise to — or minimize — right-wing extremist groups and associated violence.

We conducted extensive field work across the country, interviewing law enforcement officials, community groups and adherents of the right-wing extremist movement. We also gathered open-source intelligence to gain a more comprehensive understanding of the movement in Canada.

Overall, the results suggest that despite a lack of attention from law enforcement, policy-makers, mainstream media and the public, the movement was alive and well, with more than 100 active groups and well over 100 reported incidents of right-wing extremist violence in the country between 1980 and 2015.

In other words, the radical right has been gaining momentum in Canada for years prior to Trump.

A key turning point, in fact, was during the latter months of 2015. Two important events created a perfect storm for the movement.

First was Justin Trudeau’s pledge, as part of the Liberal party’s election platform, to welcome 25,000 Syrian refugees to Canada by the end of 2015. The second was the terrorist attack on concert-goers in Paris, inspired by the so-called “Islamic State,” on Nov. 13, 2015.

Each of these events were distinct in nature, yet Canada’s radical right wing treated them as interconnected, arguing that Canada’s newly elected prime minister was not only allowing Muslims into the country who would impose Sharia law on Canadian citizens, but that they too could be “radical Islamic terrorists.”

It all sparked a flurry of anti-Muslim discourse in Canada.

The day after the Paris attack, a mosque in Peterborough, Ont., was deliberately set ablaze, causing significant damage to the interior of the building.

The next day, a Muslim woman picking up her children from a Toronto school was robbed and her hijab torn off. The perpetrators called her a “terrorist” and told her to “go back to your country.”

Days later, an anti-Muslim video was posted on YouTube in which a man from Montreal, wearing a Joker mask and wielding a firearm, threatened to kill one Muslim or Arab each week.

Similar events continued to unfold in 2016 — all, of course, well before Trump’s election victory. A school in Calgary, for example, was spray-painted with hate messages against Syrians and Trudeau: “Syrians go home and die” and “Kill the traitor Trudeau.”

Edmonton residents were also faced with a series of anti-Islamic flyer campaigns, hateful messages were spray-painted on a Muslim elementary school in Ottawa and man in Abbotsford, B.C. went on a racist tirade and was caught on video.

Canadian chapters of Soldiers of Odin first made their presence known in the early part of 2016 by patrolling communities and “protecting” Canadians from the threat of Islam, and the Patriotic Europeans Against the Islamization of the West (PEGIDA), an anti-Islam group who first appeared in Canada in 2015, continued to rally in Montreal and Toronto in 2016.

And so it would be impulsive and short-sighted for us to attribute our spike in hatred solely to Trump and his divisive politics.

Instead, the instances listed above serve as an important reminder that prior to Trump’s election victory Canada was experiencing a rise in hatred.

In responding to hatred in Canada, we must first acknowledge that it exists in Canada, and it becomes ever more present during times of social and economic uncertainty. We must also acknowledge that the foundations of hatred are complex and multi-faceted, grounded in both individual and social conditions.

So too, then, must counter-extremist initiatives be multi-dimensional, building on the strengths and expertise of diverse sectors, including but not limited to community organizations, police officers, policy-makers and the media. Multi-agency efforts are needed to coordinate the acknowledgement and response to right-wing extremism in Canada.

I see signs of us moving in the right direction in building resilience against hatred in Canada. But in the months and years ahead, there’s still much to do.