Two Trump endorsements—one from Sen. John McCain's former running mate, and one from Iowa's governor—come just before the Iowa caucus 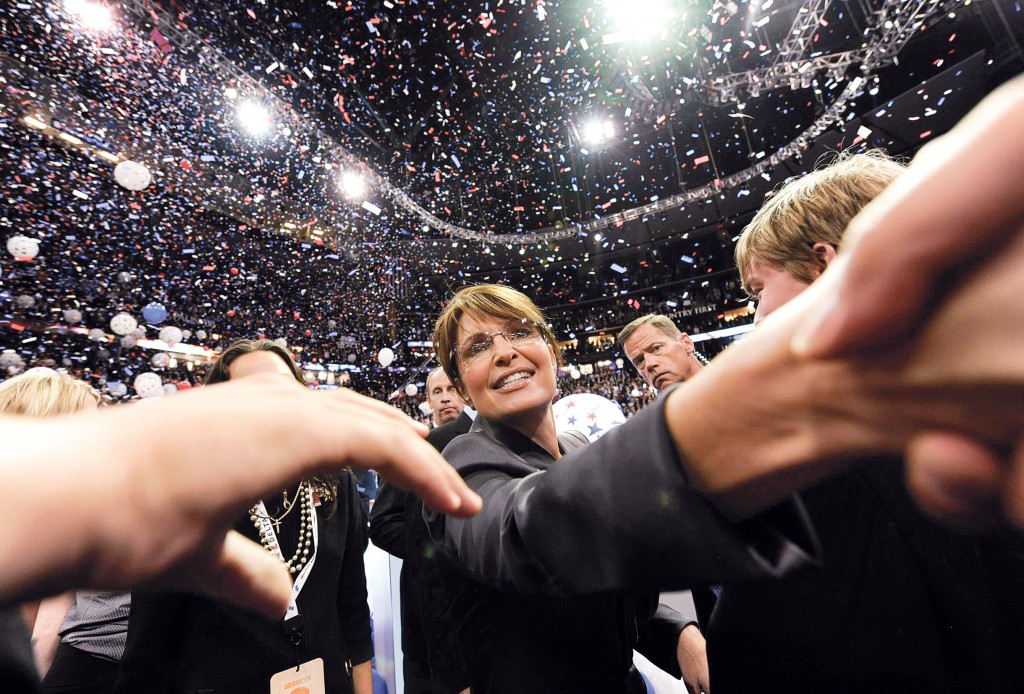 WASHINGTON – One of the most polarizing figures in American politics has helped obliterate any lingering chance that Donald Trump might recede to the background before the presidential nomination voting starts in two weeks.

The endorsement of the reality-TV-star-turned-politician by a politician-turned-reality-TV-star, Sarah Palin, was just one of several developments celebrated by the Trump camp Tuesday.

Trump not only won the support of the Tea party star. He also buttered up corn farmers in Iowa. He got what amounted to a de-facto endorsement from the governor of the earliest-voting state. He even got the backing of John Wayne’s daughter.

“No more pussyfootin’ around,” the ex-vice-presidential candidate told an Iowa rally.

“Are you ready for a commander-in-chief who will let our warriors do their job and go kick ISIS ass?”

She ridiculed veteran politicians and applauded Trump’s private-sector past — “Can I get an hallelujah?” But her rambling address included applause lines that fell flat — like when she said Trump would use military might sparingly: “Jihadists… Let them duke it out and Allah sort it out.”

Standing nearby was the Republican front-runner. Trump entertained the crowd at one point by making the pointing-finger-you-are-fired gesture from his old TV show “The Apprentice.”

The alliance of two such political celebrities all but ensures that Trump will continue to receive the bulk of attention heading into the Feb. 1 Iowa caucuses, drowning out the competition including his chief rival, Sen. Ted Cruz.

At face value, the Iowa vote is relatively insignificant. It’s been far likelier in the past to pick a Republican nomination loser like Mike Huckabee and Rick Santorum, than crown the eventual winner. It awards a small number of convention delegates.

But it would represent a huge burst of momentum for Trump. He’s already dominating polls in the second-voting state, New Hampshire. A win in Iowa, followed by another in New Hampshire, would give him a huge advantage entering a series of southern primaries. He’s now beaten out his neck-and-neck Iowa rival, Cruz, for Palin’s affection.

While derided as a gaffe-prone dimwit by late-night comedians and the mainstream media, Palin has used her standing within the party to draw attention to conservative causes and candidates.

One of her former pet causes — ironically — was Cruz. She campaigned for the firebrand right-winger in his successful 2012 outsider bid for a senate seat.

Some of Cruz’s aides grumbled that she’d betrayed conservative principles by backing a celebrity Manhattanite whose political positions have shifted with the prevailing populist winds.

But Cruz was gracious about it.

“I love (Palin),” the Canadian-born senator tweeted. “Without her support, I wouldn’t be in the Senate. Regardless of what she does in 2016, I will always be a big fan.”

He was less laudatory of the Iowa governor Tuesday. Terry Branstad said he wanted to see Cruz defeated. The reason: The Texas conservative opposes federal support for ethanol fuel.

“Ted Cruz is ahead right now,” Branstad said, according to the Des Moines Register.

“He’s heavily financed by Big Oil… (He) hasn’t supported renewable fuels, and I think it would be a big mistake for Iowa to support him.”

Cruz has cast his position as a courageous stand for free-market principles, against federal renewable-fuels standards that cost consumers and enrich Iowa farmers.

Trump is going all-in on ethanol. He called Tuesday for an increase in the minimum-ethanol content — which polls suggest is extremely popular in the state.

A conservative writer expressed exasperation that Palin would endorse a candidate with such anti-conservative policies.

But Charles C. W. Cooke noted something he’d written a year ago about Palin: that she was less like Ronald Reagan and more like Trump, less about conservative principles than about selling emotion and outrage.

“Fast-forward a year and she’s endorsing Donald Trump — who’s running around the country, rambling, not making a whole lot of sense, and selling outrage and emotion,” he told MSNBC. “I think they’re two peas in a pod.”