With his complacency and disregard for others, Trump and his White House now epitomize the 'case clusters' and 'super-spreaders’ researchers say are driving the global pandemic 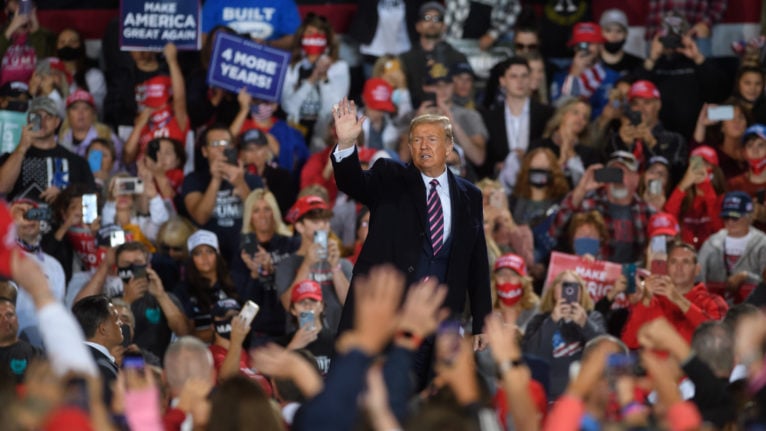 On Tuesday, U.S. President Donald Trump mocked his election opponent, Joe Biden, for wearing masks and running a campaign that adhered to COVID-19 rules set out by the Centers for Disease Control. “I don’t wear masks like him,” Trump said of his opponent. “Every time you see him, he’s got a mask. He could be speaking 200 feet away from them, and he shows up with the biggest mask I’ve ever seen.”

NBC reporters noted that Trump’s guests at the debate, including his family, did not wear masks once they were in the hall—despite the rules mandated by the Cleveland Clinic—and that they rejected a Cleveland Clinic doctor’s attempt to get them to wear masks.

That same day, some of the president’s closest aides sensed that Trump “was feeling poorly,” Jordan Fabian and Jennifer Jacobs of Bloomberg reported, and seemed exhausted. And that evening, at one of his a massive rallies, the president, his aides and much of the tightly packed audience were unmasked.

On Thursday, after White House officials knew that senior Trump adviser Hope Hicks had tested positive for COVID-19, Trump, who had been in close proximity with Hicks for days, flew with his large entourage—including staff and Secret Service—to his golf course in New Jersey for an intimate fundraiser.

On Thursday evening, Jacobs of Bloomberg broke the news that Hicks has COVID-19. A few hours later Trump confirmed he and his wife are positive.

It’s hard to overlook the symbolism of Trump’s positive test emerging a day after a major study pointing to the importance of “super-spreaders” and clusters in the transmission of the virus. Trump has been identified by Cornell University researchers as the world’s “single largest driver of misinformation around COVID.” Throughout the pandemic, the U.S. president has recklessly and flagrantly disregarded science and factual information regarding the disease.

There are a few simple messages from public health officials around how to create layers of protection against transmitting and contracting COVID-19: wear masks, maintain physical distance where possible and wash hands frequently. No one measure is foolproof; rather they buttress each other and contribute to lessening the risk of spreading COVID-19.

And, increasingly, Japan is getting attention for how it has managed to contain super-spreading events through intense contact tracing and the country’s “three Cs” messaging, which warns people to avoid a) closed spaces with poor ventilation b) crowds and c) close-contact settings.

Donald Trump’s White House ignored all those rules and recommendations. Instead, it put its faith in daily tests of Trump and those around him. Yet, as experts have repeatedly explained, it takes time for the virus to incubate enough to register on tests. And the quick tests used by the White House can generate higher numbers of false negatives than the standard PCR test used by most public health agencies.

In particular, Trump loathed masks and mocked anyone who wore them. Few in the White House donned the facial coverings. The few safety protocols, like temperature checks and asking about symptoms, which were in place in the spring were gone by August, when Peter Nicholas of The Atlantic went to the White House.

RELATED: COVID-19 in Canada: Here’s how our battle against the second wave is going

As Nicholas wrote: “The reason is clear enough: For Trump, shirking daily mask use seems like a culture-war triumph. A mask is both an emblem of the nanny state and a visual symbol of a continuing public-health calamity that could ultimately cost him re-election—an unwelcome reminder of the death toll and economic carnage that have destroyed the fundamental argument he’d hoped to make to voters.”

Even after the Trumps and Hicks tested positive, disdain for masks endured in the White House. On Friday morning, CNN’s Jim Acosta tweeted, “Senior WH official Johnny McEntee just passed me outside West Wing. He said he was on his way to getting a covid test.” Then Acosta followed up: “He was not wearing a mask.”

Everyone is tired of COVID-19. Everyone is sick of all the public health measures. Yet what is happening in the White House is a cautionary tale of what can happen if people relax—or worse, show open contempt for containment measures. We may need to add a fourth C to Japan’s rules: complacency. It is easy to let up, to assume, “Well, I haven’t gotten COVID-19 yet, so those rules don’t apply to me.” But infectious diseases can’t be rationalized. They don’t respond to pleas of tiredness.

In early August, a couple had a small wedding in Maine. Few guests wore masks or distanced. That single event would turn into a super-spreading cluster, with more than 170 cases linked to it. At least eight of those people have died, none of whom even attended the nuptials.

In Ottawa, two people in their 40s went bar-hopping while waiting for their COVID-19 tests, the Ottawa Citizen reports. Those results were positive and five establishments on Elgin Street have had to close.

RELATED: Trump vs. Biden I: Come on, man

Autumn is perhaps the most dangerous time for dealing with this pandemic. People are stressed and exhausted. The number of cases is climbing in many parts of the world. The weather is cooling, meaning events are moving indoors. And, in northern climes like Canada, the flu season is starting.

Donald Trump keeps looking for the quick fix, the easy out. For him, it was tests. If everyone around him was tested enough, he assumed, then he was safe to go about his life like normal. According to the New York Times, Trump officials hoped to keep the news of Hope Hicks’ positive result from the public. As of Thursday evening before the news became public,Trump was still scheduled to hold two huge rallies in Wisconsin this weekend. This despite a COVID-19 outbreak that is wracking the state, adding 2,887 cases that day alone. Hospitals warned that they were running out of beds.

The extent of the White House cluster is still unclear. But on Friday, Republican Senator Mike Lee and Notre Dame University president John Jenkins both announced that they had tested positive for COVID-19. The previous Saturday, Lee and Jenkins had been seated near each other, without wearing masks, at the crowded White House event presenting Amy Coney Barrett as Trump’s nominee to the Supreme Court. In addition, Ronna McDaniel, the chair of the Republican National Committee, revealed she too had COVID-19; she had been with Trump on the previous Friday. (Biden and his wife tested negative on Friday.)

For months, it was business as usual at the White House. Now, even Trump cannot deny the reality of COVID-19.