Allen Abel: Like Obama in Cuba and Nixon in China, now comes Trump's opening for a high risk encounter that seems likely to yield little 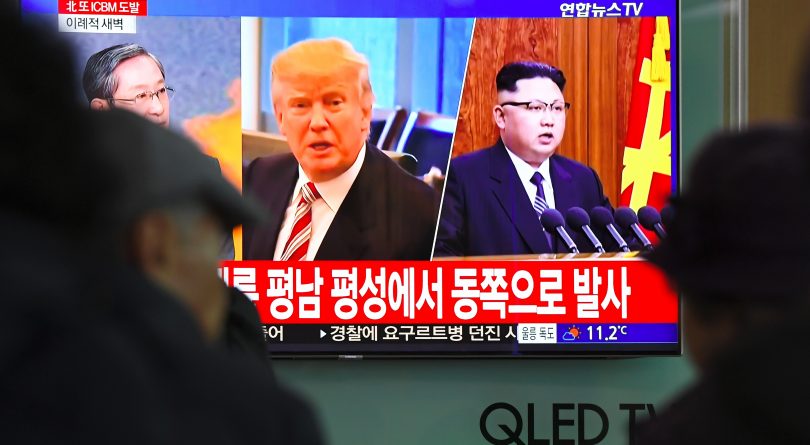 This is the age of Dotard Diplomacy, as practiced by Kim Jong-un and Donald J. Trump and announced on the Thursday night of a week that truly has been astonishing, even by Trumpian standards: two crazed cults of personality rutting in an open field with no preparation, no agenda and no sane way out if they fail.

You have heard the news. Sometime this spring, somewhere on a planet that each of them has boasted of the power to incinerate should the fancy seize him, the North Korean and American presidents will circle each other in single combat, brandishing their nuclear buttons, each man hoping, like Robert the Bruce at Bannockburn, to earn the honours of history by splitting his enemy’s head and helmet clean through.

“As far as the risk of dealing with a madman is concerned,” Donald Trump said presciently last weekend, when this revolutionary rendezvous of Big and Little Rocket Men still was only a fantasy, “that’s his problem, not mine.”

“The United States: Chief Mastermind of Terrorism,” the web site of Radio Pyongyang still was snarling on Friday morning, clinging to the status quo ante. A search of the keyword “Trump” yielded no results.

Friday afternoon, White House press secretary Sarah Huckabee Sanders tossed a small improvised explosive device into her chief’s roadway to the Nobel Peace Prize. The press secretary told combatants at her daily White House briefing that the Big Ego Summit will not occur until and unless the United States sees “concrete, verifiable” proof that the Kim regime actually is honouring its promise to disband its atomic arsenal. How this espionage will be accomplished in the most secretive and dimly-lit country in the world, Sanders declined to say.

“The United States has made zero concessions,” Sanders said,  as if going from fire and fury to fine and dandy with the heir and perpetrator of one of the cruelest regimes since the Middle Ages doesn’t constitute giving away the store.

READ MORE: Absolut Trump: A week of chaos and contradiction

“Look, at this point we’re not even talking about negotiations, right?” a senior administration official told reporters on a White House conference call just after Kim’s invitation was accepted. (The secretary of state, emasculated and irrelevant in Trump’s heliocentric universe, was in Djibouti at the time. “In terms of the decision to engage between President Trump and Kim Jong-un, that’s a decision the President took himself,” the blindsided Rex Tillerson said the next morning in Africa.)

“To what do you owe this recent openness to talk?” Trump himself was asked on Tuesday, an eternity ago.

“President Trump made his reputation on making deals,” the senior official concurred on Thursday. “Kim Jong-un is the one person who is able to make decisions under their authoritarian—uniquely authoritarian—or totalitarian system. And so it made sense to accept an invitation to meet with the one person who can actually make decisions instead of repeating the, sort of, long slog of the past.”

“The United States will not be imprisoned by the past—we’re looking to the future,” the president agreed. “I’m not interested in having battles that frankly started before I was born. The Cold War has been over for a long time.”

But this was not Donald Trump speaking; it was Barack Obama, glowing after meeting Raúl Castro in Panama in 2015. But even if half of Obama’s hipster heart was in Havana, his pilgrimage to Cuba was not enough to usher in a new age of plenty and pluralism on that beautiful, weary island. Tomorrow, in fact, is Cuba’s election day, with only one party on the ballot, and so little on the shelves.

“In anticipation of the inevitable speculation which will follow this announcement, I want to put our policy in the clearest possible context,” the president expounded in a broadcast address. “I have taken this action because of my profound conviction that all nations will gain from a reduction of tensions and a better relationship.”

But neither was this Donald Trump at the microphone; it was Richard Nixon in the summer of 1971, informing the world of his intention—after years of fomenting enmity and months of secret talks between Henry Kissinger and Zhou Enlai—to travel to Mao Zedong’s reddest China. But Nixon’s famous gambit was not enough to save a rising China from the carnage of Tian’anmen Square, nor to cushion Nixon himself from  disgrace and downfall.

Now comes Donald Trump’s opening to a country that contributes nothing to the world’s granary of knowledge, enlightenment, charity, liberty or peace.

“Tush, tush, man, never fleer and jest at me. I speak not like a dotard nor a fool,” bragged Leonato in Shakespeare’s Much Ado About Nothing.

“I alone can fix this,” declared Trump at the Republican National Convention.

“Will this encounter throw open the gates of your labour camps, fill your commissaries with whole-grain rice, and give everyone in North Korea a free year of Netflix?” an Old (South) Korea Hand, just home from the host of the Olympic Winter Games, asked the pariah-state’s only broadcaster by email, across the DMZ.

“Your Flash player is out of date,” Radio Pyongyang replied.