Allen Abel on what the Parkland students told Trump: "I woke up to the news that my best friend was gone, and I can go into a store and buy a weapon of war?"

Under a gilt-framed portrait of a pensive Abraham Lincoln—who fell to a vengeful and handsome young man with a gun; who lost sons aged four and twelve to sickness; who needed no star-spangled lapel pin to prove his patriotism—Donald Trump spent 90 minutes nodding and sighing with the families of America’s innumerable school-dead in the White House, then offered a sure-fire solution that nearly all of them rejected.

Arrayed in a butterfly of chairs in the State Dining Room with the president at its heart, parents and siblings of innocent, beautiful, assassinated children from Parkland to Columbine to Sandy Hook throbbed with grief and anger. In response, Trump offered his usual, and usually vacuous, assurances of alacrity and action—“It’s not going to be talk as it has been.We’re going to get it done—we’re going into age of purchase”—and called for “adept” teachers to arm themselves and for ex-Marines and airmen to be deployed on the beachheads of the nation’s kindergartens and in the bloodied trenches of its picture-book libraries.

“Adept, adept, adept,” he repeated, while also calling for a construction boom in mental institutions—Trump-branded, perhaps—to accommodate “sick, sick” and “coward” triggermen as in the olden, golden days.

“They may be Marines,” the president offered, detailing his desire to install the country’s superannuated armed forces in the republic’s classrooms and corridors. “They left the Marines, they left the Army, they left the Air Force. I really believe that if these cowards knew there were professionals with great training, they wouldn’t go in.”

“Does anybody like that idea?” Trump asked the congregation of his brainwave. (On the campaign trail, The Donald often boasted of holding a rare New York City concealed-carry licence; of packing heat himself.)

A couple of hands, maximum three, went up from the fifty or sixty invitees.

“Does anybody not?” he pursued.

Nearly everyone else saluted.

READ: Charting the ‘normalization’ of gun attacks on U.S. kids

It was, for most of the tense and tearful audience, no place for a father of five living children to speak his own imagined truths at all.

“North Lauderdale King David Cemetery, that’s where I go now to see my daughter,” one Florida father seethed. This was Andrew Pollack, whose daughter was shot nine times on Valentines Day by a boy the FBI let slip like sand, like oil, like laughter through its hands.

“I go to the airport, I can’t get on a plane with a bottle of water,” Mr. Pollack said. “But some animal can come into our school and shoot our children. It’s simple. It’s not difficult. We protect airports. We protect concerts, stadiums, embassies. I went to the Department of Education and they have a security guard IN THE ELEVATOR. How do you think that made me feel?

“I’M PISSED!” the shattered father railed, and the man under the portrait of Abraham Lincoln rocked softly in his woven rattan chair with the presidential seal.

This is what the children of Parkland said to Donald Trump:

“I turned 18 the day after and I woke up to the news that my best friend was gone, and I can go into a store and buy a weapon of war?”

READ: Another school shooting in America and all the nonsense that will be said

“I’m a survivor. I want you to emphasize the point that I survived. I was lucky enough to come home from school. It’s very scary. And to know that a lot of people do not have the opportunity to be here still is mind blowing. I’m confident that we’ll do the right thing. There’s definitely a lot more to go but I’m just grateful to be here. No child, no person will have to go through something so horrific and tragic.” 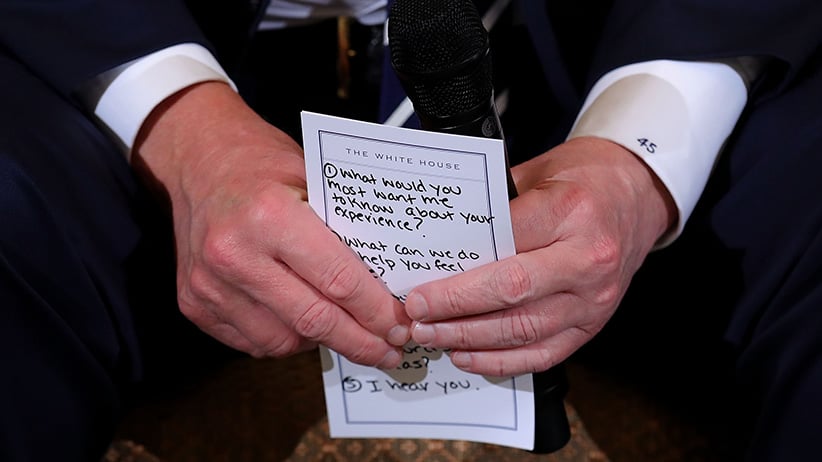 U.S. President Donald Trump holds his notes while hosting a listening session with students survivors of mass shootings, their parents and teachers in the State Dining Room at the White House February 21, 2018 in Washington, DC. (Photo by Chip Somodevilla/Getty Images)

“I was actually in the second classroom I was shot at. Nothing horrible should ever have to happen to you. You can’t even think about it. It doesn’t even seem real still. It seems fake. I don’t even know what’s going on.”

A girl named Carson Abt straight-haired, studious, unafraid to speak truth to power:

“I know that there are a little different solutions but one was about all the drills and protocols—through research I found only 32 states require drills . . . I think a change that will increase all the training and protocol so if a shooting does happen, at least all the teachers will be prepared and keep students safe”.

“I’m only 15 years old. I was born into a world where I never got to experience safety and peace. This has to never happen again. People need to feel like when they go to school they can be safe. Parents shouldn’t have to go through the idea of losing their child.”

(A week ago, Justin hid in a closet, texting his father, texting his mother: “If something happens, I love you. . .”)

A girl, bare-shouldered in the current style, told Donald Trump: “You’re a great leader.” But he already knew that.

A father from Sandy Hook said, “This is not a difficult issue,” and another man said it would be a good idea to arm the custodians and the librarians and the school cooks, and a woman from Florida said, “I implore you, consider your own children. You don’t want to be us.”

On the wall, Abraham Lincoln, who knew grief and guns and sorrow, sat, his chin in his hand, and said nothing. “Thank you for pouring out your hearts,” said Donald Trump.