With yet another national crisis looming, the president theatrically embraced his Democratic rivals and made livid his own party's leaders 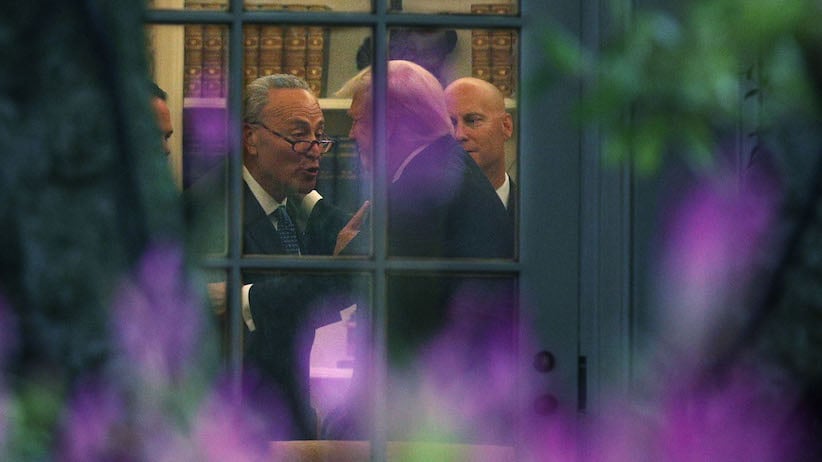 U.S. Senate Minority Leader Chuck Schumer  makes a point to President Donald Trump in the Oval Office prior to his departure from the White House Sept. 6, 2017 in Washington, DC. (Photo by Alex Wong/Getty Images)

The gene that triggers the development of basic human sympathy and amicability, long recessive in the male line of the Trump family, appeared to bore its way to the surface this week when Donald J. Trump, the fire-breathing and nominally Republican president of the United States, was seen through the windows of the Oval Office in a warm abrazo with a Democratic politician he recently denigrated as a lying, crying clown.

The image of Trump engaged in a grinning laying-on-of-hands with his long-time frenemy, Senator Charles (“Head Clown”) Schumer of New York, was captured Wednesday by crack news lensman Alex Wong through the foliage of the Rose Garden. (Such espionage by accredited White House photographers is permitted.) It came just a few months after Schumer wept openly while excoriating Trump’s ban on travellers from multiple Muslim countries and the president responded by saying “I noticed Chuck Schumer yesterday with fake tears. I’m going to ask him who is his acting coach.”

But by Thursday morning, Trump’s sudden, theatrical surrender to Schumer’s plan to lash a short-term increase in the many-trillion-dollar American national debt to billions in succour for the drowned city of Houston had been followed by Trump’s solemn promise to top House Democrat Nancy Pelosi that he will not deport any of the so-called Dreamers he seemed prepared to expatriate in cold blood just one week earlier.

“For all of those (DACA) that are concerned about your status during the 6 month period, you have nothing to worry about,” Trump tweeted, apparently at Pelosi’s direct instruction. “No action!”

“I was telling my colleagues, this is what I asked the president to do,” Pelosi crowed to reporters in the Capitol basement Thursday, decked out in smiles and pearls, “and boom boom boom, the tweet appeared.”

All this kumbayah occurred just a few weeks after a challenge to Pelosi’s leadership of the House Democratic caucus bubbled up and Trump responded by tweeting, “I certainly hope the Democrats do not force Nancy P out. That would be very bad for the Republican Party—and please let Cryin’ Chuck stay!”

But now Trump and Schumer were bro-bracing with smirks as bright as Broadway and Pelosi was noting how splendid it is that Sen. Schumer “can speak New York to the president” and avowing that “the president really cares about the Dreamers or he knows that he should care about the Dreamers.”

Any more of this and Trump will be able to run for re-election in 2020 as a Democrat.

“Public sentiment is everything,” Pelosi said Thursday, quoting a great Republican—Abraham Lincoln—while reporting that public sentiment has been firmly on the side of those 800,000 imperiled young people who were sneaked, swindled or smuggled into the United States as children. (Breitbart News, on the other hand, labels them “Obama’s Illegals,” even though most of them crossed the frontier during the presidency of George W. Bush.)

Douglas, Lincoln claimed, had personified his cause in himself. And so it has been with Donald Trump, at least with his core of Caucasian supporters who swept him to the nomination of a party to which he never truly sought to belong, and then sent him to Washington to blow the city—and what they see as a corrupt, complicit two-party system—to the sky, obliterating statute-enactors Schumer, Pelosi and Republican leaders Mitch McConnell and Paul Ryan with it.

“Let’s hope this is a sign of something to come,” Pelosi enthused Thursday, having slain the dragon, at least for a few hours. “The world we live in is a giant kaleidoscope, turning one way and then the other.”

By Thursday afternoon, while the president stood in the East Room with the travel-ban-exempt Emir of Kuwait—another hereditary zillionaire who hit the Powerball the day he was born—the Senate already had passed the Schumer-Trump treaty. Meanwhile, the ultra-conservative Freedom Caucus of the House of Representatives was threatening to derail any further attempts by Trump at bipartisan comity, even though virtually every one of their home districts was carried by Trump last fall. (In that 1858 election, Douglas and his Democrats, backed by public sentiment, defeated Lincoln.)

Trump and Schumer continued their collaborations on Thursday, expressing their shared desire to end periodic “fiscal cliff” negotiations in Congress forever by removing the ceiling on the national debt altogether, a stance that negates everything that the Republican Party has stood for since the ascent of the Tea Party/hell-no faction in 2010.

Republican leaders were reported to be livid at Trump’s performance as a one-man hurricane season, even as Houston began its reconstruction—much of it, most likely, to be performed by undocumented Latino workers, the parents of the Dreamers—and as Irma was gunning for Mar-a-Lago, the president’s Palm Beach seaside resort. (Donald Trump, Jr., this same day, was being interviewed behind closed doors by members of a Senate panel who are looking into his now-infamous meeting with a Russian lawyer who claimed to have dirt on the Dems.)

It was those Biblical wind-and-rainstorms, not a presidential crossing of the Oval Office floor, Ryan told correspondents Thursday, that led to Trump’s literal and figurative embrace of the Democrats’ proposal.

“The President made it really clear what he was aiming for was a bipartisan moment while the country is facing two horrible hurricanes,” the Speaker of the House postured, speaking from the same lectern vacated by Nancy Pelosi moments earlier, trying to look as un-livid as possible, while wearing a necktie of perfect Hillary Clinton blue.

Ryan said that he and Sen. McConnell acceded to the agreement, not wanting to provoke a contumacious floor fight at “a moment of national crisis,” as if every moment since Trump’s inauguration hasn’t been.

“I know there’s a lot of interpretation about the meeting yesterday,” Ryan said. “Isn’t a good thing that congressional leaders talk?”