Donny from marketing goes to the United Nations 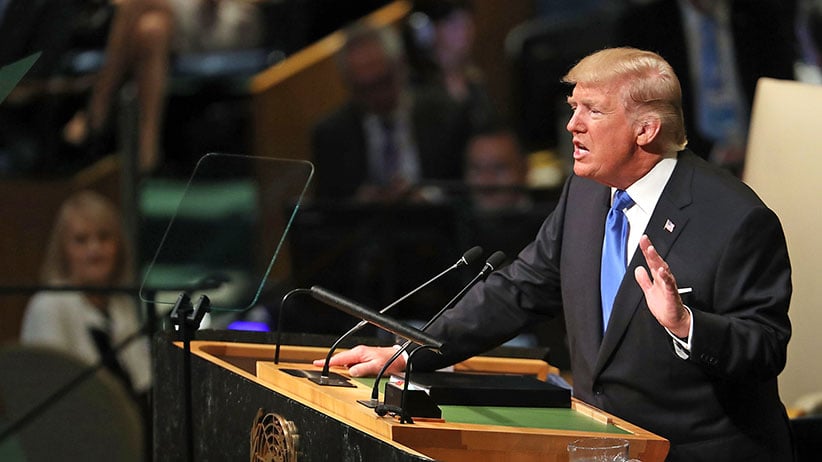 Observers on both sides of the political spectrum have been looking forward to the arrival of President Donald Trump at the United Nations this week. His supporters giddily anticipated the sight of an American leader finally giving the finger to the “cosmopolitan globalists”, the cabal of Soros-funded socialists in black helicopters who they see as the greatest existential threat to the republic. With equally unseemly pleasure, his detractors expected the president to once again embarrass himself in front of the world.

But it is unlikely either group found satisfaction in his maiden address at UN headquarters.

Trump did give one of the best speeches of his political career. But that needs to be qualified. We have become so accustomed to his self-aggrandizing asides, the rambling anecdotes, the sentence fragments and lies and bluster, that when he manages to simply read from a teleprompter it is a major step forward. Nonetheless the tone, the cadence, the reflexive hand gestures were still more reminiscent of a speaker at a multilevel marketing seminar than a global statesman at the General Assembly.

READ MORE: At the UN, bracing for the arrival of Donald Trump

And, Trump did try to shake up the clubby UN world. His speech was bookended with calls for greater national self-interest—arguing every country is obligated to make itself great again. It was possibly the first time since William Howard Taft that an American president stood on an international stage and called for less multilateralism. But, then the president listed off what he considered to be the most pressing problems facing the world and announced it was up to the United Nations to fix them.

The president brought the bellicose thunder that plays so well at his campaign rallies. He called North Korean President Kim Jong-Un “Rocketman” and threatened to “totally destroy” his country. He attacked Iran, and Venezuela, and Cuba and implicitly criticized Russia and China. He talked about the “loser terrorists”. But his aggressive rhetoric barely registered among the hundreds of gathered leaders and diplomats. No one gasped or murmured. The Iranian representative played on his iPhone. The North Korean took a few notes. When he attacked socialism, Trump waited several increasingly awkward seconds for applause that never came. After eight months in office, the world knows he is a president that must be carefully managed, but at the same time he is not a man that can be taken seriously.

When it was over, the applause was polite. Israeli President Bibi Netanyahu smiled, but few others did, not even the First Lady. Trump’s address to the General Assembly was not the triumph his fans expected, and it was not the embarrassment his foes wanted.

RELATED: The Pax Americana is officially over

There was nothing new and no surprises. His threats might be real, but they rarely are. His strategy might be sincere, but is unlikely to be executed. His diplomats might be useful in the collective struggle to fight climate change, or find peace, or end poverty, but fewer than half came this year.

The United States might still be a superpower, but once again there are others. Trump may be president, but he matters less now than he did six months ago. And his speech likely confirmed for many in the audience that America also matters less than it did before—it is no longer “the leader of the free world”.

It is this last fact, and not the president’s speech, that will dominate everything else that goes on at the UN General Assembly. Russia and China are rapidly pushing their interests ahead as the United States retreats. American allies like Canada and Europe are re-aligning and building new coalitions. This new paradigm will influence every meeting and every discussion on every issue in New York this week. The Trump sideshow is over. Everyone has work to do. The world is moving on.