Don't worry, the adults are in the room at the White House. So is Kim Kardashian.

Allen Abel: Donald Trump's Washington woke up to fear, loathing and name-calling—and that was the good part of the day 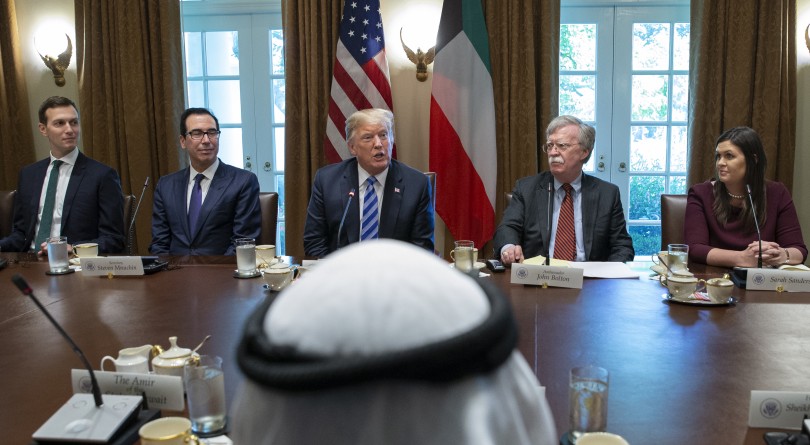 It’s Wednesday in Washington, a hundred degrees in the shade. A woman in a U.S. Senate hearing room is screaming “Yes means death!” Ted Cruz is in a Twitter war with Mahmoud Ahmadinejad, Kim Kardashian is parleying with Jared Kushner and Marco Rubio is threatening to “take care” of the conspiratorialist poop-disturber Alex Jones. Good times.

By comparison, the White House is an oasis of serenity, bleaching in the glare. The 72-year-old president is in his rotund office, governing. “I love Canada,” Donald Trump is saying. In the circular driveway, the 89-year-old Emir of Kuwait is getting out of his limo and griping, “Damn, it’s cold!”

Ha ha—fake news! It’s all fake news, the president of the United States is tweeting—the news in Bob Woodward’s new book that the Secretary of Defense thinks that Trump’s like “a fifth or sixth-grader,” the news that his own chief of staff called him “an idiot” and “unhinged,” the news that he labelled his own Attorney General “a retarded person,” the news that staff members hide important documents from the president of the United States to keep him from blowing up the planet, or making paper airplanes from the juridical writs.

“Book is boring,” whines The Donald like a fifth or sixth-grader forced to practice the piano on a beautiful summer day.

“& untrue,” adds the man who knows untruth when he says it.

In late afternoon, yet another grenade hits the South Lawn. An anonymous, self-congratulatory op-ed in the New York Times by a “senior administration official—there are dozens or hundreds of these— describes a White House staff working actively to thwart the infantile urges of the man who won the 2016 election.

“Americans should know that there are adults in the room. We fully recognize what is happening. And we are trying to do what’s right even when Donald Trump won’t,” the spectre writes.

“One person who frequently talks to Trump said aides have to push back privately against his worst impulses in the White House,” reports another leading publication, “and have to control information that may infuriate him. He gets bored and likes to watch TV, this person said, so it is important to minimize that.”

This is from Politico in January 2017, two days into Trump’s term!

Back up a couple of hours. Wednesday begins at the Senate hearing on the president’s nomination of Brett Kavanaugh to join the Supreme Court. Day Two.

“You’re asking me to give a view on a potential hypothetical,” the nominee shrugs to a Democratic inquisitor. A woman’s right to an abortion has been settled by “precedent on precedent,” Kavanaugh coins.

It’s a trifle quieter today—only about 15 or 20 convulsive screamers are carried out during the morning session. The Handmaids in their white and crimson pose again like statues in the halls. A person in a BORN THIS WAY T-shirt is hauled away bodily by the surgical-gloved cops. The Democrats boycott the boycott that their left-est supporters urge and mind their manners for once.

RELATED: Brett Kavanaugh can’t squeeze in a word at his own confirmation hearing

Old Orrin Hatch of Utah quotes a letter from 41 legalists who assert that Judge Kavanaugh possesses “the character, temperament and intellect that will make him an asset.”

“Brett Kavanaugh is a mensch,” the Mormon quotes a prominent Jew. 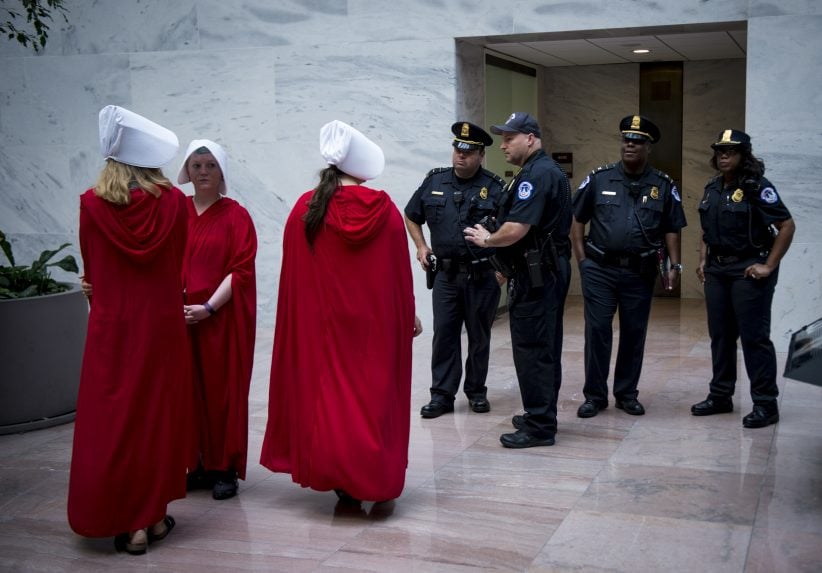 They come to the nub now—does Brett Kavanaugh believe or does he not believe that a sitting (tweeting, snarling, winning, slandering, philandering, cursing, strutting) president can be forced to obey a criminal subpoena? (Kavanaugh once did assert that an ongoing trial of the chief executive would “cripple the federal government.” Alexander Hamilton argued in 1787 that the “The President [unlike the King] could be impeached, tried, and upon conviction removed from office, and would AFTERWARD be liable to prosecution.”)

“Suppose you had a case involving President Trump?” wonders Orrin Hatch. (And everyone else in the world.)

“Senator, I’m an independent judge,” comes the response. “Team of nine … without fear or favour … without pressure from any quarter … “ Kavanaugh recites.

“What sort of loyalty will you owe to the president?”

“Senator, if confirmed to the Supreme Court, and as a sitting judge, I owe my loyalty to the constitution.”

“The President … shall be removed from Office on Impeachment for, and Conviction of, Treason, Bribery, or other High Crimes and Misdemeanors,” states the constitution’s Article II, Section 4. Expect to hear this often cited, beginning next January 3 when a Democratic majority is sworn into the House of Representatives.

“What if a president issued a pardon in exchange for a bribe—or for a promise not to testify against him?” presses patriarch Patrick Leahy of Vermont, 41 years on the Judiciary Committee. “The president says he has power to pardon himself. Does he?”

“The question of self-pardon is something I have never analyzed,” Brett Kavanaugh slyly smiles.

The president is tweeting, meanwhile, about the unpardonable (to him) Colin Kaepernik, impeached footballer and icon of conscientious protest and corporate profit.

“Nike is getting absolutely killed with anger and boycotts,” Trump sniggers of the company that has adopted the ex-QB as its progressively-pitch-perfect pitchman. (“Nike’s controversial Kaepernick ad has millennials snapping up the stock,” counterpunches Yahoo! Finance.)

But did not a distinguished jurist—appointed by a Republican president—once state that the burning of the U.S. flag (or, by extension, not kneeling before it as the national anthem is played) is a sacred constitutional right? This is because, the judge wrote:

Though symbols often are what we ourselves make of them, the flag is constant in expressing beliefs Americans share, beliefs in law and peace and that freedom which sustains the human spirit. The case here today forces recognition of the costs to which those beliefs commit us. It is poignant but fundamental that the flag protects those who hold it in contempt.

This was Justice Anthony Kennedy, whose “swing vote” Donald Trump believes will become a rigid right-wing reflex as soon as Brett Kavanaugh replaces him on the team of nine.

A few doors down from the Kavanaugh hearing, senators are beleaguering high executives of Facebook and Twitter, a day after the latter’s legal-affairs director warned that the platform’s tolerance of sharp speech from political figures is “not a blanket exception for the president or anyone else.”

RELATED: Does Donald Trump even want a NAFTA deal?

But the belligerent provocateur Alex Jones HAS been periodically banned from Twitter, and now he is teasing Marco Rubio in the hallway for condoning the so-called silencing of conservatives and rapping the Florida senator on the shoulder and Rubio is warning Jones to back off, or else. And Ted Cruz—remember when Lyin’ Ted and Little Marco were the favourites for the Republican nomination for president?—is on Twitter, reacting to his current election opponent Beto O’Rourke’s alleged support of Mahmoud Amadinejad’s support of Colin Kaepernick by tweeting “When a radical anti-Semite, anti-American Iranian dictator emphatically agrees with you,” Cruz tweeted, “maybe that’s a sign Beto, the NFL, and Nike are all on the wrong side of the American people.”

Back at the White House, Kim Kardashian has returned, meeting with son-in-law Kushner, among others, to discuss the issue of executive clemency. (See “does the president have the power to pardon himself,” above.)

The president, then, brings young Jared—he is the administration’s designated Middle East peacemaker, after all—back to the Oval Office for more palaver with the Kuwaiti Emir. Exactly a year ago this week, the same Emir and the same president held a joint press conference at which Donald Trump threatened North Korea with precipitous annihilation. Now The Donald and Kim Jong-un are buddies, and the president is offering to try the same gambit with the mullahs of heinous Iran. “We’ll see what happens with Iran, whether they want to talk or not that’s up to them, not up to me. I will always be available,” says Donald Trump.

On Canada and NAFTA, that terrible, terrible deal:

“Canada’s meeting with us right now as we speak. We have to make a fair deal with Canada … We have a very strong position, and we are the one that people want to come in and take advantage of… I’m not blaming Canada, I love Canada, I love the people of Canada, but they and other countries have been taking advantage of the United States for many years.”

“Right now we’re in very intense negotiations, I would say would be the word, intense, with Canada. We’ll see how it works out. If it doesn’t work out it that’s going to be fine for the country, for our country. It won’t be fine for Canada, but we love Canada, they’re our next-door neighbour, we’ve had a great relationship with them for many, many years. But look, Canada’s done very well with this relationship, but the United States from an economic standpoint, you look at the tariffs that were put on our dairy products, if you look at the walls that were built up in terms of barriers, you have tremendous trade barriers… I think they will treat us fairly, I think we’ve come a long way toward them treating us fairly, but we’re meeting right now with Canada and over the next day or two we’ll see what happens.”

In the White House Briefing Room, a fellow named Bashar from the office of the Emir of Kuwait is one of a dozen functionaries in thick black suits against the September Washington chill.

“In your country,” he is asked, “can the Emir be impeached?”

“Impeach, yes,” the Kuwaiti replies. “They can only just impeach him, but they cannot choose the next Emir. The Emir is always coming from the same family.”