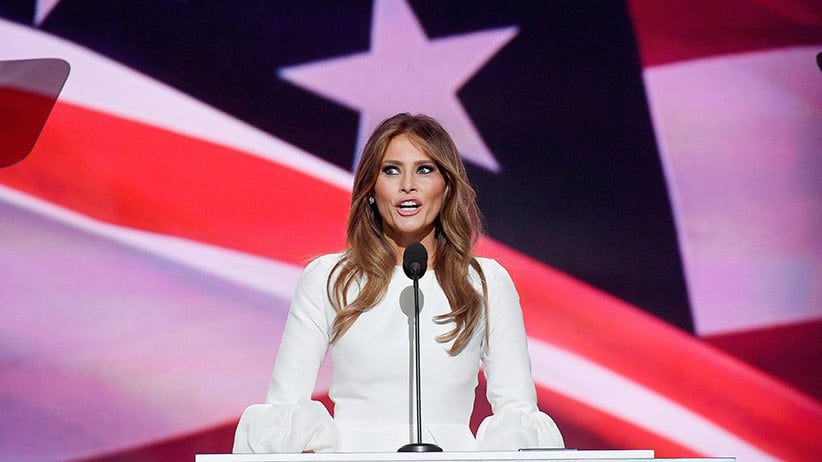 Oct. 18, 2016: As some of Donald Trump’s own supporters said he needs a “miracle” to win this election, the Republican nominee’s wife, Melania, accepted several one-on-one interviews in which she defended her husband from mounting allegations of sexual assault—not to mention the audio recording of his lewd remarks directed at women. Melania’s defence: blame Billy Bush.

Hillary Clinton wasn’t campaigning, and instead prepared for Wednesday night’s third—and final—presidential debate. But that didn’t allow her team to hide from the controversy of an alleged quid pro quo between the State Department and FBI over the classification of an email from a Clinton server.

Melania Trump has re-emerged on the campaign trail. She’s come to her husband’s defence nearly two weeks after a behind-the-scenes audio recording from 2005 caught Trump saying lewd things about how he treats women. In interviews with Fox and CNN, Melania blamed Access Hollywood co-host Billy Bush for egging Trump into saying what he said, and also tried to convince her husband to avoid interviews with the likes of Howard Stern—who also seems to make Trump chatty about inappropriate subject matter. Melania called her husband’s remarks “offensive,” but also said that Trump apologized and they are moving on together. One person who is also moving on is Billy Bush; he was fired from his new co-hosting role on the Today show.

John Kirby, a spokesman for the U.S. State Department, spent Tuesday morning making the rounds at television stations to refute any reports that suggest a quid pro quo between the FBI and State Department regarding the FBI’s decision to declassify one email from the server of then-Secretary of State Clinton.

Trump called for the resignation of the Undersecretary of State who allegedly tried to influence the FBI, while President Barack Obama said Tuesday that the accounts suggesting a trade-off “are just not true.”

The lone email in question has been made publicly available—though it is heavily redacted.

Trump’s latest catchphrase? “Drain the swamp”; that is, Washington, D.C., with a handful of ethics reform proposals. On Tuesday in Colorado, Trump claimed the reforms would include a constitutional amendment to set term limits for members of Congress. At the moment, senators and members of the House can serve an unlimited number of years, so long as they’re re-elected each cycle.

A visit to North Carolina

The Republican vice-presidential nominee, Mike Pence, spent Tuesday in North Carolina—a trip that included a visit to the Republican Party office in Hillsborough that was firebombed over the weekend. Pence called it a “cowardly act” and “political terrorism,” adding that a lack of national news coverage of the attack was further proof of media bias against the Trump/Pence ticket.

Trump accused Natasha Stoynoff of fabricating her story for People magazine in which she described a physical attack at the hands of Trump during a visit to his Mar-a-Lago club in 2005. Melania Trump demanded a retraction and apology for one section of the story where Stoynoff wrote about running into Melania months after the incident.

On Tuesday, People revealed six witnesses who corroborated Stoynoff’s story, including one person who said she was with Stoynoff at the time of the chance encounter with Melania.

So what explains Trump not recalling the alleged incident? “It’s possible he just doesn’t remember it,” Stoynoff said. “It was over 10 years ago and I assume I am one of many, many women.”

Back in August, when Trump was asked for potential female candidates for his cabinet were he to win the election, he only mentioned one name: Ivanka, his daughter. What role he was considering isn’t known, but when Fast Company asked Ivanka this week about any potential role in her father’s administration, she replied: “I don’t intend to be part of the government.” While she has been a staple of Trump’s campaign, Ivanka also rejected the label of “adviser.” What’s her preferred title? Daughter.

For Trump to get elected, he’ll likely need to carry Arizona, Ohio, North Carolina, Florida and Nevada. According to RealClearPolitics polling averages, he leads by one point in Arizona and Ohio, but trails Clinton by three points in North Carolina—and four points in both Nevada and Florida.

But even if Trump wins all those states, plus the typical Republican strongholds, that still won’t be enough. To win, he’ll likely still need one of the following states to push him over the edge for 270 electoral college votes: Colorado (where he trails by seven points), Wisconsin (also down seven points), Minnesota (down four points), Virginia (down nine points), or Pennsylvania (down seven points).

With numbers like that, it’s no wonder one of Trump’s super PAC chairs said the Republican nominee needs a “miracle” to win. Polling analysis site The Upshot gives Trump a mere eight per cent chance of winning the presidency right now. Trump has less than a month, and just a single debate, to improve those odds.

House Speaker Paul Ryan isn’t interested in campaigning alongside or defending remarks from Trump, to the point that the Republican nominee suggested Ryan might secretly be hoping for a Clinton win. In an interview with ABC, when asked if he thinks Ryan hopes for a Trump win, Trump replied: “Well, maybe not, because maybe he wants to run in four years.” Ryan’s response has been the same since Trump started attacking him in recent weeks: he won’t say a thing about Trump.

Back in July, much to his chagrin, documentary filmmaker Michael Moore told TV host Bill Maher that he thought Trump will win the presidency—and soon outlined the reasons why on his website.

But Moore isn’t one to take a back seat during election season, and announced an “October Surprise” of his own this week: a free screening Tuesday night in New York City of his latest 73-minute film, Michael Moore in TrumpLand.

The movie’s official release will be Wednesday.

Even though they won’t vote in November, Clinton is handily beating Trump in one poll of future voters: schoolchildren. A Scholastic Student Vote survey found 52 per cent of school kids preferred Clinton going to the White House, compared to 35 per cent who favoured Trump. While it was not a scientific poll, there was one surprising result: 13 per cent of the children would vote for neither Trump nor Clinton, marking down instead a preference for the likes of Gary Johnson, Jill Stein and even Bernie Sanders.