Election Daily: The warrant, the wife, and the Weiner 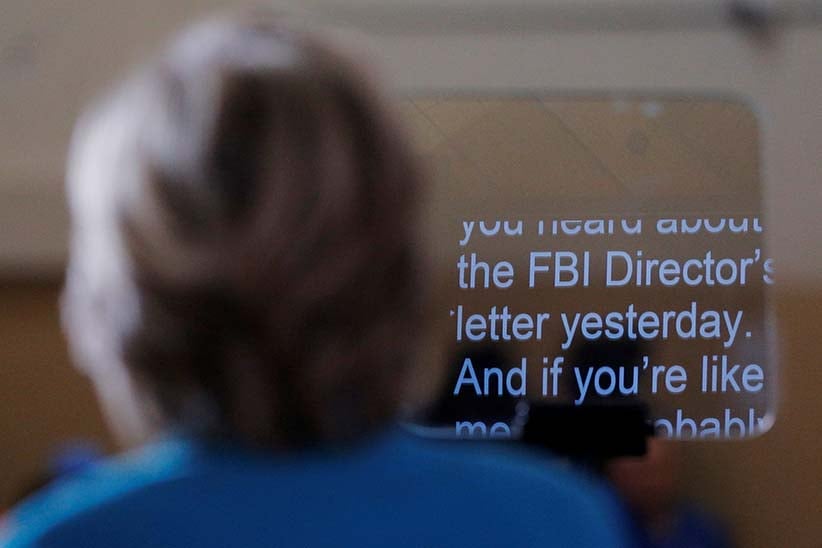 Oct. 31, 2016: No Republican presidential nominee has won Michigan since 1988. So why is Donald Trump spending an entire day campaigning in the state that’s almost certain to vote Democrat? Either it’s a last-second desperate attempt in his efforts to win 270 electoral votes, or he smells an opportunity in the wake of the reemergence of Hillary Clinton’s email scandal. Clinton spent Monday in Ohio trying to reassure the crowd that the FBI found no wrongdoing when they investigated her emails previously and they’ll find nothing again after getting a warrant to look at emails belonging to her longtime aide, Huma Abedin.

And as Trump sees a path to the White House opening on the electoral map, Clinton’s team is trying to scare voters away from voting Trump—by finding the “Daisy Girl” from a famous 1964 presidential ad who, decades later, now says she now fears a Trump presidency could start a nuclear war.

The FBI got a warrant. But the Democrats say this late election scandal is unwarranted. Days after FBI director James Comey told Congress—and pretty much the entire world—that he was re-opening the investigation into Clinton’s email server scandal, the FBI got a warrant for the emails belonging to Clinton’s longtime aide Huma Abedin found on her estranged husband’s laptop, all of which was uncovered during a completely separate investigation into former congressman Anthony Weiner and allegations he exchanged sexually explicit messages with an underage girl.

And while the Trump camp has cheered the FBI along in their recent work, Clinton told an Ohio crowd on Monday that the FBI found no criminal wrongdoing when the investigated her emails, they similarly won’t find anything when they look at her staffers emails, saying: “There is no case here.”

What a lonely time to be James Comey. Not only are many questioning his decision to bring up these emails mere days before the election, many are questioning the timing of the announcement: the FBI reportedly came across these emails weeks ago.

Former U.S. attorney general Eric Holder wrote a critical editorial of Comey, calling him a good man who “made a serious error.” Holder wrote the department has “a practice of not commenting on ongoing investigations” and “a policy of not taking unnecessary action close in time to Election Day that might influence an election’s outcome,” adding Comey failed to do both—especially given Comey has said himself that he’s unsure the emails will be of any significance at all.

Democrats are calling on Comey to resign, with Senate Minority leader Harry Reid suggesting Comey may have violated the Hatch Act, a federal law prohibiting government officials from using their authority to influence the election. Even some Republicans, like former congressman man Joe Walsh (a Trump supporter), think Comey screwed up.

Hillary is corrupt as hell, but the FBI Dir has no right to mess with an election.

He goes public cuz of emails no one has seen? Just wrong

What Comey did should concern us all. It's an unconstitutional abuse of government power against our electoral process.

In the 1964 presidential campaign, Lyndon B. Johnson team unleashed perhaps the most famous political attack ad in the history of U.S. politics: a little girl counting daisy pedals up to 10, as a nuclear bomb countdown begins. The message was clear: a vote for Barry Goldwater was a vote for nuclear destruction.

Just over 50 years later, the Clinton team is trying to paint Trump as a similar threat—so they tracked down Monique Corzilius Luiz, the original Daisy Girl, to talk about why she fears a Trump presidency would ratchet up the nuclear threat. Have a look.

Even if Trump wins swing states like Florida, Ohio, Iowa and North Carolina, that still might not be enough for him to get elected. That might explain why Trump is going after traditionally Democratic states, including visits to Colorado and New Mexico over the weekend, two stops in Michigan on Monday, and rallies set in Wisconsin and Pennsylvania on Tuesday.

It’s a big challenge, even with the recent FBI/Clinton scandal. According to polling data from RealClearPolitics, Trump hasn’t led in any Wisconsin or Michigan poll since the campaign started; he trails by an average of four points in Colorado; he hasn’t led a Pennsylvania poll since early July.

Is this a sign of desperate times calling for desperate measures? At the Washington Post pointed out, this is the exact same last-minute strategy deployed by John McCain in 2008 and Mitt Romney in 2012. Of course, it didn’t work out all that well for either of them.

A leak and a rash

Prior to the Democratic Party’s primary debates, CNN commentator and interim chair of the Democratic national Committee Donna Brazile was likely leaking questions that would be asked to the Clinton camp.

In one email uncovered by WikiLeaks hacking into a Clinton aide’s emails, Brazile wrote: “One of the questions directed to HRC [Hillary Rodham Clinton] tomorrow is from a woman with a rash […] Her family has lead poison and she will ask what, if anything, will Hillary do as president to help the ppl of Flint.”

Indeed, a mother from Flint asked Clinton and Bernie Sanders about what’d they do about public water systems.

CNN said Monday in a statement that it was “very uncomfortable” with the news, saying they never gave Brazile any advanced knowledge of the questions or other background info on the events. CNN, meanwhile, cut ties with Brazile as one of its commentators.

Before Mike Pence became Donald Trump’s running mate, the New York Post is reporting that Trump initially offered the job to New Jersey governor Chris Christie—the first major Republican to support Trump during the primaries—but then withdrew the offer at the pleading of his family, Republican leaders and campaign chairman.

They opted on Pence, an evangelical Christian who would unify the party and not carry the baggage of Christie and the Bridgegate scandal. When Trump had to break it to Christie that he wouldn’t be his running mate after all, he reportedly told him it would “tear my family apart if I gave you VP.”

Add the Financial Times to the long list of news outlets endorsing a Clinton presidency. The latest endorsement comes after the re-emergence of the Clinton private email server scandal and news that the FBI is re-opening its investigation.

“Mrs Clinton carries enough baggage to fill a Boeing 747. She is not trusted by the majority of voters,” FT wrote. “But she is manifestly more competent than Mr Trump whose braggadocio, divisiveness and meanness are on daily display. Despite her faults, Mrs Clinton is eminently qualified to be the first woman elected to the White House.”

The pollster and the paycheck dispute

Trump has a love-hate relationship with polls. He’s the first to tweet out any polls that show him in the lead, but is also quick to call them rigged should they claim he’s trailing.

Turns out it’s not just polls that Trump has his disputes with, but also pollsters—namely, Tony Fabrizio, who worked on Trump’s campaign as a professional pollster but who is now disputing more than $765,000 that it claims the Trump campaign still owes his firm. “This is an administrative issue that we’re resolving internally,” a Trump adviser told the Washington Post.

It wouldn’t be the first time Trump refused to pay someone who did work for him.

Recommended reading: Trump said it took FBI director James Comey “a lot of guts” to re-open the investigation into Clinton’s private email server scandal, Clinton emphasized “there was no case,” and experts on both sides of the political spectrum were quick to criticize Comey for his announcement so soon before an election. But as Democrats and Republicans argue now over the new found emails—and whether or not they will amount to anything at all—the FBI has had an internal feud over its probe into Clinton.