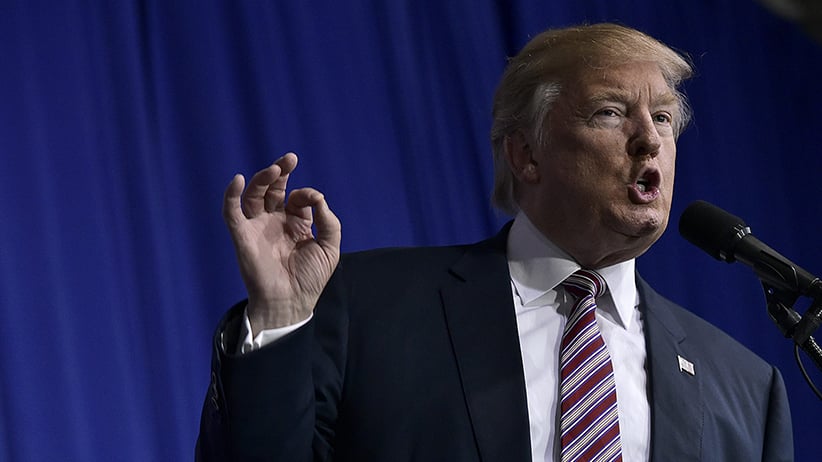 Oct. 20, 2016: Donald Trump campaigning in Ohio first on Thursday. He added some qualifiers to his debate-night refusal to promise that he’d honour the election results in November. Today, he said he would accept the results … if he wins. That victory, however, looks increasingly unlikely. In fact, a new report from the University of Virginia’s Center for Politics found Hillary Clinton could win in a landslide, amassing upwards of 352 electoral votes. (She only needs 270 to be president.)

Trump had a new line for those questioning his refusal to commit to accepting the November election results, instead choosing to “look at it at the time” and “keep you in suspense.” At an Ohio rally the day after the final debate, Trump said: “I will totally accept the result of this great and historic presidential election—(pause)—if I win.”

While no presidential nominee in history has ever not conceded an election result, Trump said asking him to pledge to accept the result before it occurred is asking him “to waive centuries of legal precedent.” Instead, Trump wants to “reserve my right to contest or file a legal challenge in the case of a questionable result.”

The move plays into his conspiracy theory that the election is rigged, but one person who wasn’t a fan of his move is former Republican presidential nominee John McCain, who said in a statement: “I don’t know who’s going to win the presidential election. I do know that in every previous election, the loser congratulates the winner and calls them ‘my president.’ That’s not just the Republican way or the Democratic way. It’s the American way.”

And for the record, McCain knows something about how to deliver a gracious concession speech.

Another day, another accuser

Yet another woman has come forward with allegations that Trump groped her. The latest accuser is yoga teacher Karena Virginia, who told media of an experience in 1998. As Virginia waited for a car while watching a tennis match at the 1998 U.S. Open, she says Trump approached her, put his hand on her breast, and when she flinched, he said, “Don’t you know who I am?”

Trump’s team denied the allegations, saying the story is fabricated and that Virginia’s high-profile lawyer, Gloria Allred, was a “discredited political operative.”

In the aftermath of Trump’s leaked Access Hollywood audio recording, the number of women who have alleged the Republican nominee groped them is now in double digits.

Trump has made a lot of promises to fix U.S. trade deals. He’d renegotiate the North American Free Trade Agreement, opt out of the Trans-Pacific Partnership, and bring trade cases against China for being “a currency manipulator.”

How would all the various federal departments and agencies handle all these pledges? He’d move them all into a single office, to be called the “American Desk,” within the Department of Commerce

After each and every debate, Trump has proudly tweeted about any online polls that claim he emerged victorious, even if those polls are completely unscientific and largely don’t reflect the views of the American people. This one came at 3 a.m.:

Just landed in Ohio. Thank you America- I am honored to win the final debate for our MOVEMENT. It is time to #DrainTheSwamp & #MAGA! pic.twitter.com/NjCm5W9o0x

They’re often biased: conservative news site Drudge Report often finds about 80 per cent of those who click choosing Trump. In other instances, readers can flood any website with continuous votes for Trump.

But after the third presidential debate, it seemed as though Clinton supporters wanted to give Trump a taste of his own medicine by flooding the website for Breitbart, the staunchly conservative news site and the former chairman of which is now Trump’s campaign CEO. In previous debates, Breitbart polls would find Trump the winner by margins as wide as 90 to 10 per cent. But after Wednesday’s debate…

Needless to say, the fact that someone flooded Breitbart with “Clinton won” clicks is just as useless as any other online poll. Trump fans quickly jumped on the site to help Trump regain the lead in clicks and avoid any potential embarrassment.

So who actually won the debate? In terms of scientific polls, one conducted by CNN/ORC found Clinton won by a 13-point margin and a YouGov post-debate poll gave Clinton a 10-point edge. Meanwhile, a focus group of 26 undecided voters with pollster Frank Luntz found Trump edged Clinton by 14 to 12.

On the day Clinton was to accept the Democratic nomination for president of the United States, the first woman in the country’s history to do so for a major party, Google’s top trending search was, “What will Hillary wear tonight?”

Clinton’s fashion choices have remained a talking point for some—despite the fact that it’s completely irrelevant to her policy, his experience, or pretty much anything that has to do with being president. But without the typical suit-and-tie option that male candidates wear, Clinton’s team clearly put some thought into what she was wearing.

During debate No.1, she wore all red. At the second debate, in front of a town hall style audience, she wore blue. For the final debate, all white. Red, white and blue—just in case someone was planning to criticize her sartorial patriotism.

Most pollsters are predicting a Clinton win come Nov. 8. Polling analysis websites FiveThirtyEight and TheUpshot give Clinton an 86 and 92 per cent chance of being elected, respectively.

But now the question some are asking is: how wide a margin will Clinton’s victory achieve?

That’s 352 electoral college votes, when only 270 is needed to win the presidency‚and that’s not including the states that are currently toss-ups.

Recommended reading: For the first half-hour of the debate, not only was Trump getting his points across on policy, but he even looked presidential. But around the 30-minute mark, Trump began to unravel. He had a chance to level Clinton with some serious accusations stemming from the WikiLeaks email dumps, but instead Trump got sidetracked by his opponent bringing up Vladimir Putin. And then he lost it. What happened? Read Politico‘s “The 7 minutes when Trump blew the third debate”.