From here on in, it only gets harder for Donald Trump

Allen Abel reports from the courthouse where the long arm of U.S. law finally touched the president's campaign team 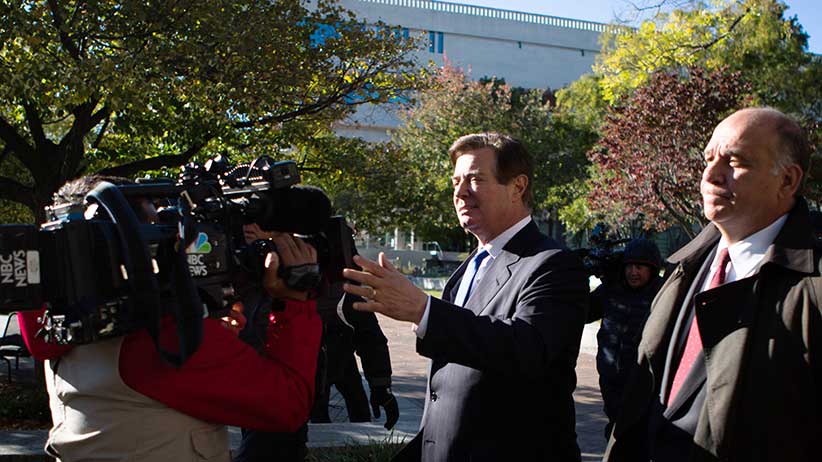 Venomous spiders on a giant wispy web haunt the South Portico of the White House for Halloween, but there is no doubt now that the capital’s creepy-crawlies are slavering for meatier prey than the mere insects indicted on Monday for crimes committed within and beyond the infested nest of President Donald Trump.

“This has nothing to do with us,” Trump’s spokeswoman snarled at reporters on one of the most portentous days of The Donald’s imperilled, imperious term. Yet Monday—when one picayune volunteer campaign advisor pleaded guilty to lying to the FBI about his overtures to “a certain female Russian national,” and Paul Manafort, the erstwhile manager of the campaign itself, was arraigned for multi-million-dollar, multi-national frauds and numerous other felonies—may turn out to be one of Trump’s easier traps to elude as the inquests slither on.

At the daily White House briefing, press secretary Sarah Huckabee Sanders proclaimed that she—and her fearless leader—still expect that special counsel Robert Mueller’s inquiries soon will expire from a lack of tenable connections to the Oval Office itself. But to many in the audience, this sounded much like the sort of airy “the boys will be home by Christmas” bromide that has proved a lie in every shooting war in history.

If Watergate and the assassination of John F. Kennedy are any guide, Russiagate and its affiliate Manafortian mysteries and Cyrillic conspiracies may linger in the American middle-distance for decades to come.

For Trump, who leaves for China, Japan, Vietnam, the Philippines and hydrogenated Korea on Friday—and who has been unable to get tax cuts, immigration reform, health-care mutations, or even a resolution in favor of Mother’s Day past the tar pit of his own party in Congress—Mueller’s first public lassoing could not have come at a worse time. Yet the president, Huckabee Sanders insisted, is “not worried about it distracting because it doesn’t have anything to do with us.”

Manafort, she insisted, was his own man, feathering his own despicable den with ill-gotten funds long before he helped transformed a loudmouth Manhattan playboy into the leader of the Free World.

Asked how Trump himself responded to the arrest of his veritable puppet-master, Sanders reported that “he responded the same way the rest of us in the White House have, and that’s without a lot of reaction because it doesn’t have anything to do with us.”

The president himself was heard from only on Twitter before entertaining an anthill of politically-oblivious children on the South Lawn, below the two-storey cobweb. “Sorry, but this is years ago, before Paul Manafort was part of the Trump campaign. But why aren’t Crooked Hillary & the Dems the focus????? . . . Also, there is NO COLLUSION!” the president tweeted.

“All of this ‘Russia’ talk right when the Republicans are making their big push for historic Tax Cuts & Reform. Is this coincidental? NOT!” Trump broadsided on Sunday, but Monday’s indictments and the guilty plea by volunteer foreign-policy advisor George Papadopolous moved the process beyond mere fat-fingered key-pecking and into the  reality of courtrooms, judges, jurie, and prison bars.

On Monday, Papadopolous was dismissed by Huckabee Sanders as a freelancer and wannabe who just happened to be photographed in Trump’s presence only once out of the “thousands of photographs with millions of people” with whom her boss has posed.

But the case against the eager volunteer explicitly refuted this dismissal.

“Defendant PAPADOOLOUS,” the dossier read, “claimed he met a certain female Russian national before he joined the Campaign and that their communications consisted of such emails as ‘Hi, how are you?’ In truth and in fact, however, defendant PAPADOPOLOUS met the female Russian national on or about March 24, 2016, after he had become an adviser to the Campaign; he believed that she had connections to Russian government officials; and he sought to use her Russian connections over a period of months in an effort to arrange a meeting between the Campaign and Russian government officials.”

There was more—an unnamed “Professor” who, Papadopolouos claimed, was in possession of “thousands of emails” from Hillary Clinton’s campaign, laden with “dirt” on the former secretary of state.

Until Monday, such innuendos could be dismissed as hearsay, if not big-league politics as usual. The guilty plea by Papadopolous tore Donald Trump’s ‘WITCH HUNT” rigamarole to shreds.

“Collusion” itself—a murky and ill-defined term when used in a legal context—was not included in the 31-page indictment of Paul Manafort and his associate Rick Gates that was unsealed Monday morning. Manafort, an erstwhile lobbyist for the pro-Russian government of pre-Maidan Ukraine who once was described by Trump as “a true professional”, and Gates, who reportedly learned only on Sunday that he would be charged and who was represented Monday by a public defender, appeared at U.S.. District Court next door to the Embassy of Canada to enter pleas of not guilty to all charges.

The two men entered the courthouse early Monday afternoon as indictees and departed in twilight under house arrest, without their passports. They will forfeit a $10-million lien should they try to swim to Lvov or Dniepropetrovsk to evade the sticky snare of justice, though that sum would be only a fraction of the monies that Manafort is charged with hiding abroad from American revenuers.

Most of Manafort’s alleged misdeeds occurred a decade or more before Trump announced his longshot, scattershot candidacy for the office he now holds. The lobbyist was charged with laundering tens of millions of dollars in foreign commissions in an attempt to elude U.S. taxes, exactly the sort of black-lagoon behaviour that Trump campaigned to stamp out.

Manafort himself said almost nothing during his appearance at the Prettyman Federal Courthouse before Judge Amy Berman Jackson, the same veteran jurist who dismissed a wrongful-death suit against Hillary Clinton last spring in the Benghazi consulate attacks. Judge Jackson was appointed by Barack Obama in 2011 and confirmed by the Senate by a vote of 97-0.

Four storeys above Judge Jackson’s courtroom—where dozens of reporters and camera crews milled and jostled—only one journalist attended the morning session of another echo of the Benghazi affair, the trial of Ahmed Abu Khatallah, alleged ringleader of the militia that stormed the U.S. consulate in 2012 and killed four Americans, including Ambassador Christopher Stevens.

In this chamber, Monday morning, an American military interrogator painstakingly detailed that even though Khatallah, who was captured by U.S. Delta Force raiders in 2014, repeatedly was reminded of his rights to counsel and to remain silent, he seemed “engaged and very interested in what we were talking about.”

Fighting sleep, a jury of twelve District of Columbians audited these meticulous proceedings, hour after hour. “Are you feeling well?” the witness reported asking Khatallah in the interrogation pod aboard the USS New York, an amphibious transport built partially from fragments of the World Trade Center. “Have you been sleeping well? Have you had time to pray?”

“He told us he thought the United States was the cause of all the world’s problems,” the witness stated, awakening the jurists. The trail is expected to continue for several more weeks.

On Monday, as the real-estate titan who professed to solve those problems by the sheer strength of his own superior intellect and deal-making watched his outer and inner circle being devoured by the American justice system, only one victory for Donald Trump occurred. Again, in Libya, U.S. forces took into custody a man named Mustafa al-Imam, another alleged protagonist in the Benghazi attack.

“Our memory is deep and our reach is long,” Trump said in a written statement. Out of sight, armed and dangerous, Robert Mueller was saying the same thing.