It may feel grim for Trump. But it ain't over 'til it's over.

On the streets of St. Louis, from the homes of Yogi Berra to Michael Brown, ‘a hell of a race’ continues 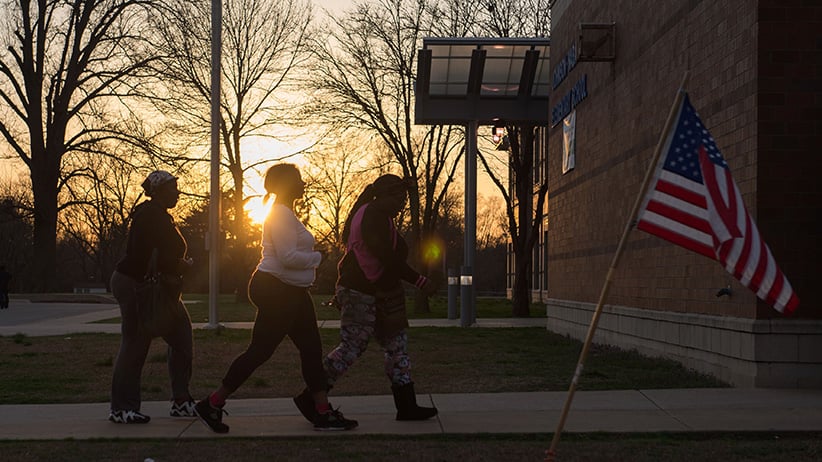 “It ain’t over ’til it’s over,” a sage St. Louisiian once observed, and so a question loomed here in the wake of the depravity of the next-to-last debate of the 2012-13-14-15-16 presidential election campaign: Is it over for Donald Trump?

Political insiders declared it so. “Everything Donald Trump touches dies,” one Republican consultant told the Washington Post the morning after Trump diagnosed “tremendous hate” in the heart of Hillary Clinton, labelled her the incarnation of Satan herself, mocked her as a mendacious pretender to the marble throne of Honest Abe Lincoln, and pledged to throw her in prison.

The roster of the infected stretched from Capitol Hill to the nation’s state houses and city halls. The Republican Speaker of the House, Paul Ryan, choked on the jagged little pill of his prior support. Trump’s running mate, Mike Pence, refused to resign after Trump told the world that he doesn’t bother to consult him. Senators and surrogates were reduced to mumbling that merely musing about pawing a woman in the genitals does not rise to the strict forensic standard of sexual assault.

“Those people will have to live with their collaboration for the rest of their political lives,” a Republican lobbyist from Florida predicted, while others foresaw the Republican majorities in the Senate and House of Representatives dissolving. 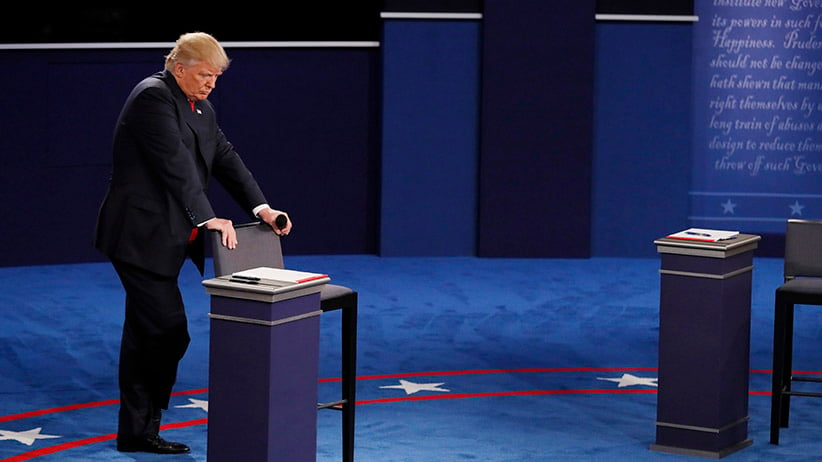 But doomsday punditry failed to consider three important matters: Election Day still is three weeks in the future; many more dark secrets about both candidates may yet be revealed; and Trump—the disastrously imperfect vessel of the legitimate economic grievances of the (mostly) white, (mostly) male minority of the American electorate—still could win.

So a reporter wandered in St. Louis, the morning after the debate: to the street in the charred and chastened suburb of Ferguson where a black man named Michael Brown, was shot dead by a white policeman in August 2014; to the front lawn of the bungalow in the well-tended, proudly Italian-American district called the Hill where that wise philosopher himself—he was Lawrence Peter Berra, known to the world as Yogi—spent his boyhood, in a simpler and more civil age, to pose that query.

“Is it over for Donald Trump?” Joe Barbaglia was asked on the Hill. He was behind the cash register at Southwest Auto Parts, buying a wad of raffle tickets from a pair of (white) St. Louis cops—first prize, an AR-15 American Tactical rifle—to distribute to local businesses. The police officers were wearing a stripe of black crepe across their badges, in honour of a white comrade shot dead last week by an 18-year-old white male.

At 59, Barbaglia was known as the unofficial “Mayor of the Hill.” He was a lifelong Democrat who had found himself swept toward Trump in the same riptide of fascination and revulsion that tens of millions of American voters still were drowning in as Election Day loomed. “It is not over for him, not by far,” Barbaglia said. “It’s going to be a hell of a race from here on. I’m glad I’m around to watch this happening. Whoever wins, I just hope they do what they say they are going to do.”

A reporter polled the four (white) men and one (white) woman who worked at Southwest Auto Parts and got four votes for Trump and one, Joe himself, undecided. The two cops raised their hands for Trump as well. “He’s more like the average American male who has a temper and who reminds me of my husband,” said the female employee, Laurie Genazzi. “And that’s scary.” But she was voting for Trump anyway.

Barbaglia said to mark him down as still undecided. “One week I like one, the next week I like the other,” he shrugged. “This week, I don’t think I like either of them. If they had a new primary today, I think both parties would pick different people. I like the way Trump says that he is going to bring this country back to where it should be, and I’m a Democrat! He’s just saying out loud what everyone else is saying behind their backs.”

For nearly half a century, from John F. Kennedy in 1960 to George W. Bush in 2004, Missouri picked the winning man, from either party, in every presidential contest, before choosing losers in John McCain and Mitt Romney. Trump still is heavily favoured to capture Missouri’s 10 electoral votes, despite everything he said in the gym at Washington University on Sunday night.

The Ferguson riots that followed the decision of a grand jury not to bring charges against the white policeman who killed Michael Brown in 2014 puzzled the mayor of the Hill. “I was wondering why people would burn down their own community for something that those businesses had nothing to do with,” Barbaglia remembered. And he noted that he liked Ferguson and its people, and that he often drove his 1964-model fire engine up there to take part in civic parades.

“Could Trump heal that divide?” he was asked. “Could Hillary heal it?”

“The people need to heal it themselves,” he replied. “There’s no one person from the outside who can heal it for us.” 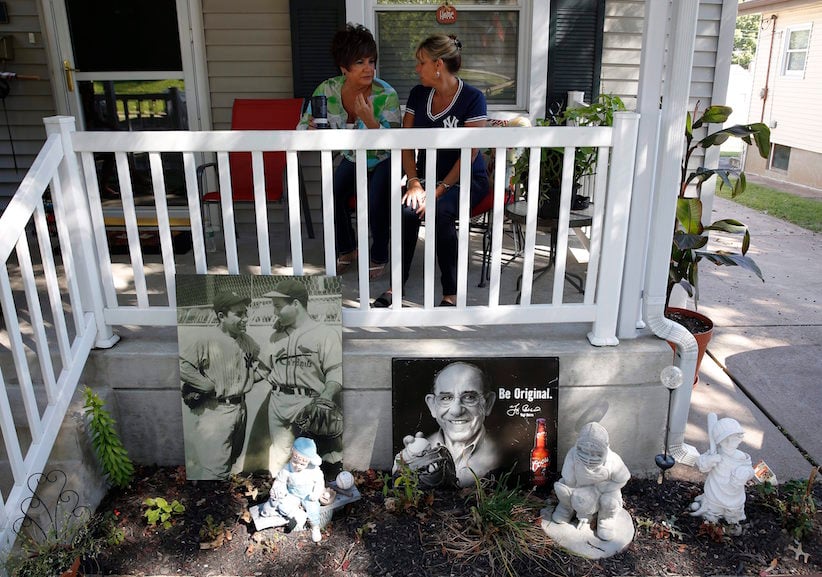 A few blocks from Southwest Auto, announced by a street sign that read “Hall of Fame Way,” was the late Yogi’s boyhood home. The house still was occupied by the daughter of the great Yankee backstop’s sister, Mary Frances Brown, and her husband, Jay Frisella. Frisella was not happy with Trump’s performance the previous evening; his dreamcatcher had let him down.

“I thought he’d make a better impression of himself,” Frisella said. “But whatever he does, it would be better than four more years of Obama.”

“Is it over for Donald Trump?” he was asked.

“I think so,” Frisella sighed. He had declared for Trump the instant the tycoon announced his candidacy, back in June 2015. “He’s letting Hillary dodge too many questions.”

Frisella looked across Elizabeth Avenue to the house where Joe Garagiola, the big-league catcher and broadcaster, grew up, and down the same little block to the homes of announcer Jack Buck and tackle Ben Pucci of the Cleveland Browns, circa 1948.

“Only about 40 per cent of people think this country knows where it’s going,” he said.

“If you don’t know where you’re going, you might end up someplace else,” a visitor responded, quoting Yogi Berra.

“When you watched Ferguson on fire, what were you thinking?” Yogi’s niece’s husband was asked, on the front lawn on the Hill. Frisella drew on his $6 hand-rolled cigar and answered: 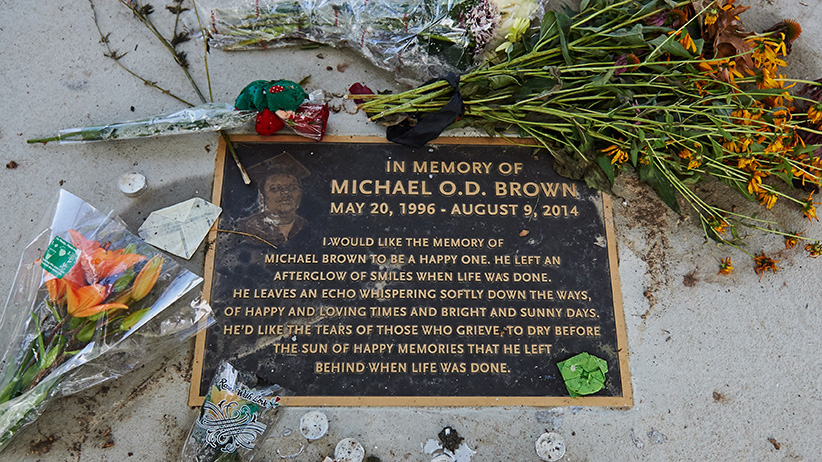 The memorial of Michael Brown Jr. is seen on August 10, 2015 in Canfield Apartments in Ferguson, Missouri. The embattled St. Louis community celebrated one year anniversary of Michael Brown Jr. being shot and killed by a Ferguson police officer on August 9, 2014. His death sparked months of sometimes violent protests in Ferguson and drew nationwide focus on police treatment of black offenders. (Michael B. Thomas/AFP/Getty Images)

On Aug. 9, 2014, the dead body of Michael Brown was left in the sun for four hours in the middle of a winding Ferguson roadway named Canﬁeld Avenue. A young man named Jerome A. Hawkins was walking along Canfield with two friends. On either side of the street were the three-storey apartments of Canfield Green, where Brown dwelled before he lolled one day down the middle of the avenue and wound up in a deadly confrontation with the constable who commanded him to get on the sidewalk.

“What did you think of the debate?” a visitor wondered.

“Childish,” replied Hawkins, who described himself as a registered Democrat but who admitted that Trump “has some valid points. But his ignorance outweighs his valid points. I don’t feel that Hillary Clinton qualifies either, but what’s the point of putting her in jail?”

Hawkins said that police-community relations had improved in Ferguson since 2014, a sentiment shared by a father of five named Eric Williams who worked in the leasing office of the Canfield Green complex, where a two-bedroom garden apartment rents for US$595 a month.

“Canﬁeld is coming back,” Williams said. “With a vengeance.” But, like Barbaglia on the Hill, he also was undecided whom to vote for; or rather, he had decided that he detested both Clinton and Trump.

“I’m not voting at all,” Williams said. “She is not going to change anything.”

If enough African-Americans across the country share this sentiment and stay home on Nov. 8, and if enough white women such as Laurie Genazzi swallow their distaste and vote Republican, then it certainly ain’t over for Trump.

On the Hill in St. Louis, and at Canfield Green in Ferguson, what really mattered was, as Hawkins said, “to wake up every day feeling thankful to God that I have another day on Earth” and to make peace with the recent past because, as Williams said, “I wouldn’t call it ancient history, but sometimes you’ve got to live and let go.”

Black fury had ignited the flames of Ferguson; white anger had created Trump. The challenge now—perhaps an insurmountable one—was to unify the country that Yogi Berra had fought for on the beaches of Normandy, and that Black Lives Matter had fought for at Canfield Green.

“Be careful through here,” Hawkins said, looking down at Michael Brown’s plaque. “If they ask you to walk on the sidewalk, you better get out of the street.”