How a wild, vicious election has rejuvenated U.S. punditry 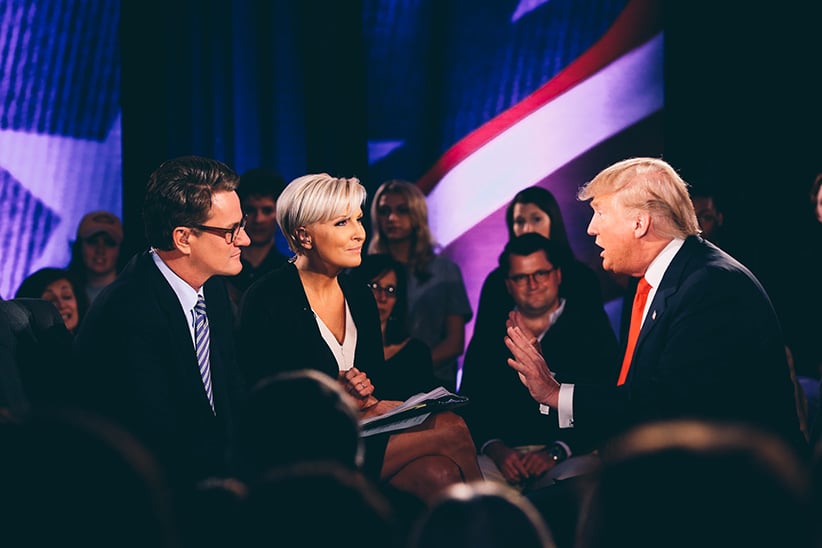 MSNBC is thought of as the most liberal U.S. news network, so why is one of their stars often accused of being in the tank for Donald Trump? Joe Scarborough, the moderate conservative host of MSNBC’s morning show, is friends with Trump, calling him “the smartest guy I’ve ever seen in my political life,” and Trump has been quoted as saying Scarborough and co-host Mika Brzezinski “had me as almost a legendary figure.” Scarborough finally criticized Trump this week over his reluctance to denounce the Ku Klux Klan, but his reputation as a Trump booster had already been secured: Scarborough was “kind of playing footsie with him and pretty much letting him know it would be an easy time,” says Justin Baragona, editor of the politics site Contemptor.

In theory, pundits are supposed to be independent; in practice, the U.S. primary season is turning some of them into unofficial campaign proxies—and you can’t always predict which candidates they’ll defend.

National Review is one of the most anti-Trump conservative publications, but Conrad Black wrote an article for its website praising his friend Trump as “a fine and generous and loyal man, and a delightful companion.” On Fox News, Baragona says, “Sean Hannity and Eric Bolling are the same way with him. A lot of that is based on their own personal friendships with Trump. You almost feel that they should recuse themselves from even discussing him at that point.” It’s routine for Fox contributors to call each other out for being Trump shills: Ben Domenech, publisher of the Trump-skeptical conservative journal The Federalist, lit into interviewer Jesse Watters for “debasing yourself at the feet of his golden throne.”

Over on the Democratic side, Bernie Sanders has set off a quieter pundit civil war. New York Times columnist Paul Krugman is a long-time Hillary Clinton supporter, and he regularly blasts Sanders supporters as “Bernie bros” and worse: In a recent column about the Supreme Court, he took time out to sneer at people who falsely believe “that a populist rising from the left is ready to happen any day now.” Ryan Cooper at The Week accused economists like Krugman of “classic hippie-punching” in their attacks on Sanders’ economic plans.

Related: The U.S. establishment can only blame itself for this climate

Though this creates bitterness within the parties, it may make political punditry more fun than it usually is. You can usually tell what a pundit will say about any issue: Krugman spends most of his time writing about how evil the Republicans are; Fox News pundits would prefer to be unloading on liberals. The rise of unconventional candidates has forced people to make new enemies. At the liberal site Salon, some columnists are pro-Clinton, while another columnist, H.A. Goodman, writes articles like “I wouldn’t vote for Dick Cheney, so I won’t vote for Hillary Clinton.” It creates more internal conflict than Salon usually has.

Primary season has also created entertaining rivalries between outlets. CNN’s Dylan Byers wrote that Scarborough’s Trump favouritism is an “increasing source of discomfort at NBC,” and Scarborough has called CNN pundits like Anderson Cooper “Trump deniers” for their initial refusal to take Trump seriously. Even The Onion has been pulled in: “The Onion’s new owner is Hillary Clinton’s most lavish financial backer,” warned Cory Doctorow at Boing Boing.

None of this might turn out to matter when the nominees are chosen. Krugman and other pro-Clinton pundits switched effortlessly to being pro-Barack Obama in 2008, and most conservative pundits supported John McCain that year despite his pro-immigration stance. The current fight might be a timeout before everyone goes back to their usual positions.

But there’s still the possibility that some of their careers could be changed by the positions they’re taking now. When radio host Hugh Hewitt asked Scarborough if he’d accept an offer to be Trump’s running mate, Scarborough didn’t rule it out: “I think I’d put myself in your category. I would do just about anything to try to get the White House back.” It sounds far-fetched, but in this election, you never know what a pundit is going to do.