Allen Abel: Marie Yovanovitch testified she was devastated when Trump cut short her career. Even as she spoke, the Great Exemplar attacked her on Twitter 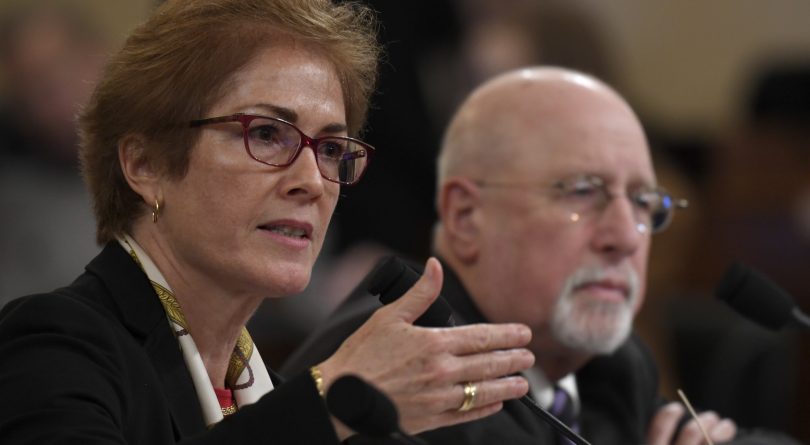 “There’s no word that can describe our wonderful country,” said the new president-elect of Ukraine down the long-distance line, overlooking the word “corrupt.”

This omission was understandable, given the excitement of talking to Donald Trump for the very first time.

“Words cannot describe how nice, warm and wonderful our people are,” Volodymyr Zelensky gushed. “How tasty our food is.”

“When I owned Miss Universe, they always had great people,” Trump responded, turning the subject, as always, to himself and his abiding interest in the state of development in the Slavic countries. “Ukraine was always very well represented.”

RELATED: Wake up, America! The Impeachment Show is on

Seven months later, it is Friday morning in the United States Capitol. The Permanent Select Committee on Intelligence is about to hear from Masha Yovanovitch, the Canadian-born veteran U.S. diplomat who was hustled out of Kyiv last summer, purportedly because she wouldn’t get out of the way of Rudy Giuliani’s back-alley Biden-hunting at the behest of Donald J. Trump.

But then, with deliciously cynical timing, just seconds before Ambassador Yovanovitch is about to raise her right hand to add her two kopiyok to the impeachment inquiry, the White House releases what it says is the declassified “EYES ONLY. DO NOT COPY” text of the Zelensky-Trump PDA of April 21 as proof that the two chieftains always have been amicable comrades-in-arms, rather than partners in crime.

(On April 21, an official West Wing summary of the call said that the two leaders agreed “to implement reforms that strengthen democracy, increase prosperity and root out corruption.” Friday’s supposedly verbatim transcript disremembers this entirely.)

President-Elect Zelensky: “I will practice English and we’ll meet in English.”

President Trump: “I could not do this in your language. I’m very impressed.”

“Have a safe flight and I’ll see you soon.”

“Take care of yourself and give a great speech.”

The function of the ambassador’s appearance before the venally-divided committee is to advance the Democratic Party’s impeachment of Donald Trump, but much of her testimony is State Department inside baseball.

She felt “kneecapped,” she says, by a “smear campaign” inaugurated by “individuals with questionable motives and with reason to believe that their political and financial ambitions would be stymied by our anti-corruption policy in Ukraine.”

“How did that make you feel?” Yovanovitch, whose Soviet emigré family moved from Ottawa to Connecticut when she was three, is asked by the Democrats’ point man, Rep. Adam Schiff, even though it is Trump’s actions, not an envoy’s emotions, that are supposed to be on trial.

“Terrible. Not the way I wanted my career to end,” she answers. But it was the end—after three decades of service to presidents of both parties, after postings to Mogadishu, London, Tashkent, Yerevan, Moscow and Ottawa, and after confirmation by acclamation in the Senate to boss the U.S. Embassy in Ukraine.

There is “a crisis in the State Department,” Yovanovitch warns. “This is about far more than me.” American diplomats, she says, are “professionals who by vocation and training pursue the policies of the president.”

But when the current president’s policy became to have her cashiered—and when she read how Trump had asked Zelensky for “a favour” when they spoke again in July—she was “shocked and devastated. It was a terrible moment. The colour drained from my face.”

Neither the witness nor the 18 men and three women on the dais argue the point that all American emissaries serve “at the pleasure of the president.” If everyone who has ever badmouthed Donald Trump is going to lose her or his job, the unemployment rate soon will be 99 per cent instead of the current three and change.

But on Thursday, Speaker Nancy Pelosi had pointedly and irreversibly raised the stakes of the proceedings, accusing Donald Trump not merely of a reprehensible quid pro quo with Zelensky over military aid and a probe of the Bidens, but with “bribery,” a fraught and flammable word that is specifically engraved in the U.S. Constitution, along with treason, as a trigger for impeachment.

“I am saying that what the president has admitted to and says, ‘It’s perfect,’ I say it’s perfectly wrong,” Pelosi said at a press conference Thursday. “It’s bribery.”

Yet during the first five hours of Yovanovitch’s appearance on Friday, the B-word never is uttered even once. Still employed by the State Department as an academic fellow at Georgetown University, she is the third career employee from Foggy Bottom to appear this week in open session, having already traversed the identical landscape behind closed doors. Next week will offer half a dozen more.

In Kyiv, meanwhile, one of Ukraine’s warm and wonderful people—Foreign Minister Vadim Prystaiko—was insisting that he has “never seen a direct relationship between investigations and security assistance. Yes, the investigations were mentioned, you know, in the conversation of the presidents. But there was no clear connection between these events.”

Whether or not this the end of Donald Trump’s presidential career is far from decided—hundreds of hours of similar hearings are yet to be endured; millions of words of attack and defence are still to be spoken. In 1973, Americans were transfixed by the meticulous prosecution of Richard Nixon that led to his resignation. The damnation of Donald J. Trump may yet reach that level of drama; or, it may fizzle into the kind of bellicose Beltway bickering that disgusts the 50 outer states.

On Friday, the American president—who was “too busy” to watch Wednesday’s session—hunt-and-pecks a peevish real-time commentary for the delectation of his loyal base that proves that he is obsessing on the witness’s every word.

“Everywhere Marie Yovanovitch went turned bad,” Trump tweets. “She started off in Somalia, how did that go? Then fast forward to Ukraine, where the new Ukrainian President spoke unfavorably about her in my second phone call with him. It is a U.S. President’s absolute right to appoint ambassadors.”

Taking off his helmet, Rep. Schiff wallops the president over the head with it and calls Trump’s tweet “witness intimidation,” throwing another potential log on the bonfire of high crimes

“Would you like to respond [to the claim] that everywhere you went went bad?” Schiff poses.

“I don’t think I have such powers,” Masha Yovanovitch replies. “I actually think that where I’ve served over the years, I and others have demonstrably made things better.”

“Witness intimidation is a crime, no matter who does it. Full stop,” the inevitable Hillary Clinton immediately echoes on Twitter.

“Extraordinarily poor judgment,” says Ken Starr, special prosecutor in Bill Clinton’s impeachment, says on CNN. “The president frequently says, ‘I follow my instincts.’ Sometimes we have to control our instinct. So obviously this was I think quite injurious. I don’t think it rises to the level of intimidation of a witness, but I think that’s the way it’s going to be characterized.”

Moments later, Roger Stone, Trump’s peacock and agent provocateur in the Wikileaks/Hillary email fracas of what seems like a million years ago, is convicted by a federal jury on seven out of seven counts of obstruction, lying to Congress, and tampering with witnesses—precisely what Adam Schiff now accuses Donald Trump of doing.

“So they now convict Roger Stone of lying and want to jail him for many years to come. Well, what about Crooked Hillary, Comey, Strzok, Page, McCabe, Brennan, Clapper, Shifty Schiff, Ohr & Nellie, Steele & all of the others, including even Mueller himself? Didn’t they lie?” tweets the Diogenes-in-Chief.

This is all we are likely to hear from Trump for a little while. His only appointment is a session on “honesty and transparency”—specifically on health care pricing—in the Roosevelt Room.

Sometime before Christmas —of what year?—the Democrats will write up formal Articles of Impeachment, which then will go to the Republican-controlled Senate for a trial of unknown length whose ground rules have yet to even be discussed by the two parties, let alone finalized.

This is going to take a while. The perogies are getting cold.