How Washington works: Inside an annual field trip for Canada's senior bureaucrats

Each year, a key Canada-U.S. lobbyist assembles a group of insiders to show Canadians the real Washington. 'It's not like Canada where five people in the PMO run the country.' 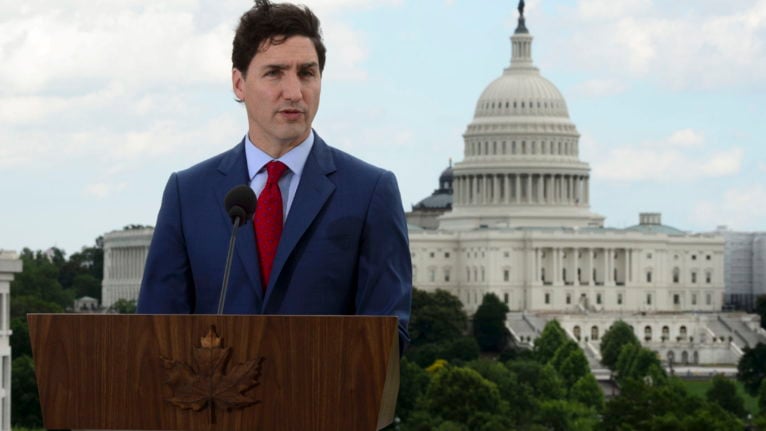 Under cover of darkness on Presidents Day this past February, less than two weeks after Donald Trump’s impeachment, a couple dozen of Canada’s top federal public servants gathered for drinks at the Watergate Hotel. But, as low as Canada-U.S. relations might appear to have dipped these days, they weren’t plotting a burglary from the storied hotel’s bar. They were the latest crop of bureaucrats who’d signed up for a three-day crash course in Beltway politics that included field trips to Congress and the Supreme Court, frank conversations about the stark differences between Ottawa and D.C., and an inside look at the next race for the White House. It’s an annual tradition for curious Canadian public servants, organized in part by a key Washington insider—and admitted Canada-U.S. geek.

“How Washington Works” is a course offered by the Canada School of Public Service (CSPS), a training ground for federal employees that aims to “provide a broad range of learning opportunities and to establish a culture of learning.” The CSPS has for years sent a gaggle of senior executives south of the border—91 of them have taken the course since Trump took over the oval office. Agendas and classroom materials distributed to students, which Maclean’s obtained via access-to-information laws, offer an inside look at three days.

Until a few years ago, the course was conducted mostly within the confines of the Canadian embassy just a short walk away from the U.S. Capitol. But that all changed in 2015, when Maryscott Greenwood, a frequent guest speaker at the event whom everyone calls Scotty, took on a new role as facilitator. The course is officially administered by the CSPS, but Greenwood’s fingerprints are all over it. Her current contract spans four years and pays her just over $15,000—but that’s a pittance, she says, compared to what she might charge a typical client. Greenwood heads up the Canadian American Business Council (CABC), an influential lobby group backed by some of the biggest corporations with cross-border business. She’s no stranger to the federal lobbyist registry.

Greenwood played an instrumental role in making Canada’s case during NAFTA renegotiations, hosting several talks with former presidents and prime ministers in 2017 and connecting senior Liberal cabinet ministers with regional audiences in key states. (After one lunchtime Q&A with Greenwood in Minneapolis, Minn., then-public safety minister Ralph Goodale reserved a few minutes in an interview with Maclean’s—on a rushed drive to the city’s airport—to heap praise on “Scotty.”)

The seeds of Greenwood’s laser-like focus on Canada-U.S. affairs were planted during a four-year stint at the American embassy in Ottawa. She served as chief of staff to then-ambassador Gordon Giffin, appointed by Bill Clinton. Two decades later, she’s based in D.C., where she runs the CABC and is a partner at Crestview Strategy. And, for a few days each year, connects Canadians with some of her friends in D.C.

Howard Dean, the former Vermont governor familiar with Canada, is a regular panelist. Kelly Johnston, a former secretary of the U.S. Senate and longtime Campbell Soup executive who sat on the CABC board, often uses his lifetime access to Congress to show the visiting Canadians behind the scenes. “A lot of the people on the agenda are doing it as a favour to me,” Greenwood tells Maclean’s.

When they arrive in town, the bureaucrats sometimes meet for introductory drinks at a bar or restaurant in town. This year, the Watergate sufficed. In 2017, the group gathered at Firefly restaurant, just off Dupont Circle—a hotbed of think tanks and embassies in the same neighbourhood as the CABC office. The reservation, naturally, was under Greenwood’s name. Nathalie Drouin, then-senior associate deputy minister of Justice who later found herself in the hot seat during the SNC-Lavalin affair, was one of three DMs on the roster that year. (In 2019, when the Washington course ran only four days after the Globe and Mail broke that scandal wide open, attendees from the same department briefly excused themselves from the room—and, when they returned, explained their temporary absence to the rest of the class).

The first priority when class gets underway is a primer on the differences between Canada’s parliamentary system and Washington’s many checks and balances. The tone is set by Susan Sullivan Lagon, a Georgetown University professor who for decades at the Government Affairs Institute led Capitol Hill training sessions on the inner workings of government. At one D.C. conference several years ago, an attendee who worked at the Canadian embassy exchanged business cards with Lagon and asked her to work her magic on visitors from the north. She’s now become a co-facilitator, along with Greenwood. Her message: The president has a lot of power, but so does Congress.

As the roster of Washington insiders cycles through the sessions and panels, Lagon says they speak candidly—but with caution—as they tell stories about their city. “How do these people, who have to deal with the current administration, talk to a group of Canadians who are just baffled?” she often wonders. In 2018, Republican National Committee member Ron Kaufman—a senior advisor at Dentons, where Greenwood then worked—spoke to the group about the upcoming midterm elections. Last year, during morning sessions held at the African American Museum of History and Culture, the Canadians heard from Cornell Belcher, a pollster for both Obama presidential campaigns, on the topic of race relations. This year, Kim Lipsky—then the head of U.S. government relations at Crestview and now lobbying for TikTok—moderated a panel on “the art and advocacy of influence.”

While they’re in D.C., the travelling bureaucrats typically only expense the best meal a taxpayer-funded paper trail can buy. “They can’t go to my favourite places, because those are way beyond their per-diems,” jokes Greenwood. Last year, the agenda included a stop at The Monocle, a restaurant a stone’s throw from the Capitol drenched in insiders chowing down or sharing drinks. But that expense was marked as “not provided”—attendees pulled out their own wallets to dine with the congressional set.

The whole point of the exercise, Greenwood says, is that senior bureaucrats won’t learn how Washington really works unless they hear from people who genuinely understand power and influence. “It’s not like Canada,” she says, “where five people in the PMO run the country.”

Some of the lessons learned are unintentional, but effective. It’s not always about who’s on the agenda, but who disappears from it at the last minute. When speakers sometimes have to cancel—a panellist once pulled out to testify at a congressional hearing—Lagon says participants see another side of how that city works: “Everything in Washington is tentative.”

Last year, a realtime case study in power and politics appeared to play out in front of the Canadians. During a tour of the U.S. Capitol, as Washington was in the throes of a budget fight that threatened to shut down the federal government, Lagon remembers the group passed by Rep. Nita Lowey and Sen. Richard Shelby, the chairs of the House and Senate appropriations committees—two of the most important politicians in the pitched battle—while they huddled in a hallway. They might well have been striking a deal. Not something you’d ever witness within the confines of the embassy down the road.

One of the biggest names to address the group in recent years was Corey Lewandowski, who sat down for a “fireside chat” a couple of days after that Capitol tour. Lewandowski gained notoriety when he served as Donald Trump’s campaign manager for a time in 2016. He’s now an advisor to the president’s re-election campaign. “A lot of the participants were absolutely horrified at what he had to say, and that was precisely the point,” says Lagon. “This is how some things work here.” Lewandowski, she points out, gave everyone a copy of his book. Whatever else they learned on their D.C. swing, that crop of Canadians came home with the same thing as every high schooler on a class trip: a hokey souvenir to remember the city by.