In the age of Donald Trump, trump gets a bad rap

The U.S. president shares his name with a word that has multiple meanings. And the simple use of it now irritates some people. 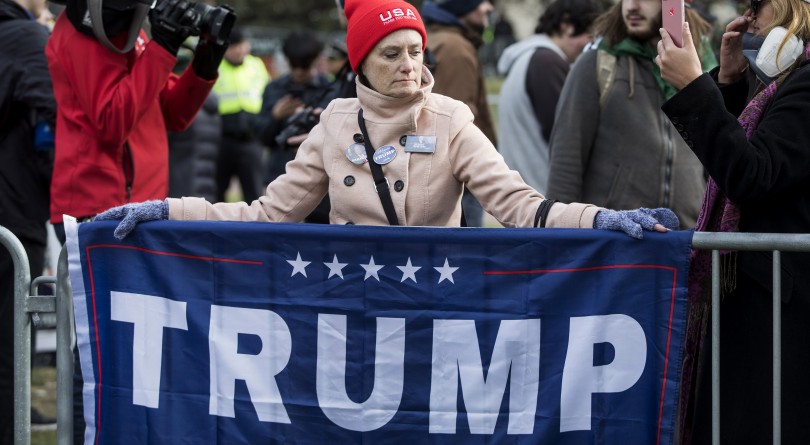 A supporter drapes a Trump campaign flag at the Boston Common on Nov. 18, 2017 in Boston, Mass. (Scott Eisen/Getty Images)

You would think that it would be catnip for headline writers, if no one else, that the president of the United States—this president—shares his name with a standard English verb with two different usages, both frequently deployed in discussing political power and rhetoric. To trump is to exert dominance by virtue of rank, and in 2016 Donald Trump, to the delight of his voters—fewer in number than Hillary Clinton’s—demonstrated how Electoral College votes trump individuals’ ballots in his country. To trump-up, on the other hand, is to falsify, a practice political foes (and fact checkers) toss at the president as often as he rages about the trumped-up, fake news spread by the media.

The different meanings derive from different histories. The power trump, familiar to millions from such card games as bridge and euchre (where the lowest of the trump suit can beat the highest of any other suit), is a 16th-century derivation of “triumph.” From there, the etymological trend line is clear and the usage’s metaphorical expansion into politics is easily understandable: just as a trump deuce triumphs over a non-trump ace, a presidential executive order trumps a predecessor’s Iran treaty or years of environmental regulations.

Trump-up is not so easy to trace, however. The noun trumpery, which if not yet fully archaic, is teetering on the edge, seems like the obvious culprit. Derived, via Middle English, from the Middle French tromper, meaning, “to deceive,” it denoted “fraud or lies” some 600 years ago when it first appeared. But it soon lost its moral evaluation sense and evolved into a practical summation: trumpery was “worthless junk.” The original root is preserved in one of those French phrases, like savoire faire, that persist untranslated in English: trompe-l’oeil (“deceives the eye”) describes a style of painting with photograph-level realistic detail. Still, despite the similarities, the word mavens do not believe it was trumpery that spun off the verb phrase trump up—both the Merriam Webster and Oxford dictionaries leave it at that, indicating etymological uncertainty as to the true derivation.

Perhaps the answer lies in that other root for a trump meaning, now archaic—in the 16thcentury a trump was also a trumpet or trumpet blast. Certainly that root is what gave rise to the third verbal meaning, one not found in Merriam Webster because it was never a North American usage: to trump, in Oxford’s delicate terminology, is “to break wind audibly.” It’s not inconceivable, given the place of flatulence in English rhetorical abuse—consider John Cleese’s iconic French Taunter in Monty Python and the Holy Grail—that false accusations were considered “not worth a fart.”

Regardless of origins, Donald Trump’s surname positively resonates with potentially useful associations, although the flatulence meaning is too British for American deployment, even for opponents repulsed by every (verbal) sound Trump makes. Why then do we hear or read so little of it?

Supporters may find decrying, say, the trumped-up accusations of the Russian witch hunt cuts too close to home; it may be that the inherent negativity of that sense of trump attaches itself to their man and overwhelms the more positive (for supporters) message of power trump. Best to avoid the whole thing. That doesn’t explain the avoidance shown by his detractors, though, especially those who tally the President’s daily falsehood pace, now averaging about 30 trumped-up whoppers a day according to media fact checkers.

The answer to that seems to be the very antagonism that might have inspired a surge in trump metaphors. Instead, any use of “trump” that is not a straightforward denunciation of the American president now irritates quite a few people. A pre-Halloween Maclean’s online poll interested in tracking readers’ candy preferences asked, in (once) innocently respectable English, “Which treat trumps all?” Some answers didn’t even bother listing a candy type before expressing how much they resented reading or hearing any use of the word trump: “I now despise that word,” wrote one. That could mean reading, “Trump offers more trumped-up accusations against [fill in the blank]” will annoy—because it seems to make light of a figure many find as dark as American politics has ever thrown up.

And, yes—full disclosure—it’s annoying to write as well. It’s all enough to suggest Maclean’s run another poll: are there bridge players out there for whom their game, a passion for many, is now played in the shadow of a constant irritant?