Why some Bernie Sanders supporters are protesting outside the 2016 Democratic National Convention, in their own words 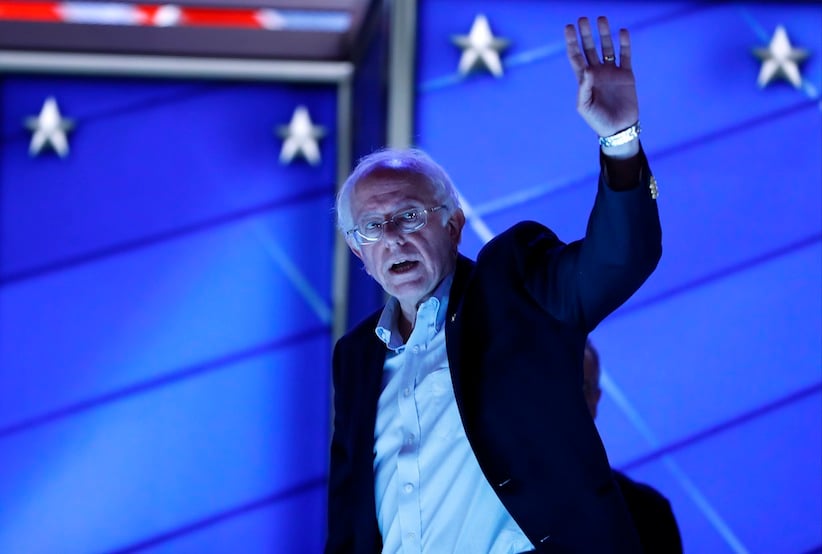 Sen. Bernie Sanders, I-Vt., waves as he walks off the stage after checking out the podium before the start of the first day of the Democratic National Convention in Philadelphia, Monday, July 25, 2016. (AP Photo/Carolyn Kaster)

PHILADELPHIA,, Pa. – Diehard Bernie Sanders supporters are protesting outside the Democratic convention. Those outside in the street express overwhelming opposition to voting for the party — even if it means electing Donald Trump. Inside the convention, a number booed when their candidate urged them to vote for Hillary Clinton.

Their frustrations have been fed by the release of stolen emails that show Democratic party officials favoured Clinton. Here, in their own words, people on the progressive left explain what’s going on:

“We have a lot more transparency now (thanks to electronic news sources like Wikileaks). But the establishment isn’t going to support that transparency, nor is American mainstream media because they are all in collusion with the powers that be… More and more people are now computer savvy, (with) social media… Bernie supporters believe (the nomination) was stolen… (Now) you can’t argue there wasn’t collusion. The Democratic party was supposed to be fair toward whatever candidates qualified.”

On whether she fears Russian state actors might be interfering in the election: “That’s so insulting to the American people. Back in the Cold War, maybe, back in the ’60s and ’70s maybe they could have said something like that… but to say that now, that’s just ridiculous. They might as well blame it on Santa Claus or the Easter Bunny.”

On whether she’s worried Sanders supporters planning to vote for the Green party will end up helping to elect Trump: “No. I’m not responsible for that bullshit. Sorry, I’m not. I think he’s making a mockery of our process. I don’t even think he’s serious about running for president… If that should actually happen I don’t even think he’ll be in control. He’ll just have people for that… We have options here.”

“I’m voting for Bernie Sanders — even if I have to write him in. Because he’s everything that I’m for. Health care for all, against the (Trans-Pacific Partnership trade deal), totally against (oil and gas) fracking. I want somebody who’s going to worry about the environment, who really knows climate change is real and is really going to do something about it.”

On whether she worries about electing Trump: “I think the (Democratic National Committee) should worry about Donald Trump… I was a history teacher… and all I have to say is, if the Democrats didn’t learn anything from 1968 when (they nominated establishment candidates and) we got Nixon as a president, and 2000 when we got Bush, and if they wanna stick with (Clinton), well, maybe we’ll get Trump. I’m as worried about a Clinton presidency as I am about Trump — because her vice-president’s as bad as his. Conservative. To me, they’re all four Republicans running. Nothing against Republicans. My mother was one.”

On her plans to vote for the Green party’s Jill Stein after 22 years of supporting the Democrats: “I’m not going to vote for Hillary Clinton. I have been anti-Hillary since the early 2000s.”

On getting corporate money out of politics: “Until we do that nothing’s going to change in this country.”

On polls that suggest Sanders supporters will mostly back Clinton: “So sad. I don’t think it’s as many as they think. I think the media’s putting out this propaganda, and the DNC… The people I see and talk to, they’re just like, ‘No way, we’re not doing it.'”

On whether she worries about Trump getting elected: “I can cast a protest vote. I can vote for (candidates like former Green nominee Ralph Nader).” If she lived in a swing state like Ohio, however, “things might be different. I’d have to make some hard choices.”