It's Day 26 of the shutdown and U.S. government workers are lining up for food

Republicans and Dems both claim to sympathize, but the bureaucrats aren't hungry enough for either side to stand down 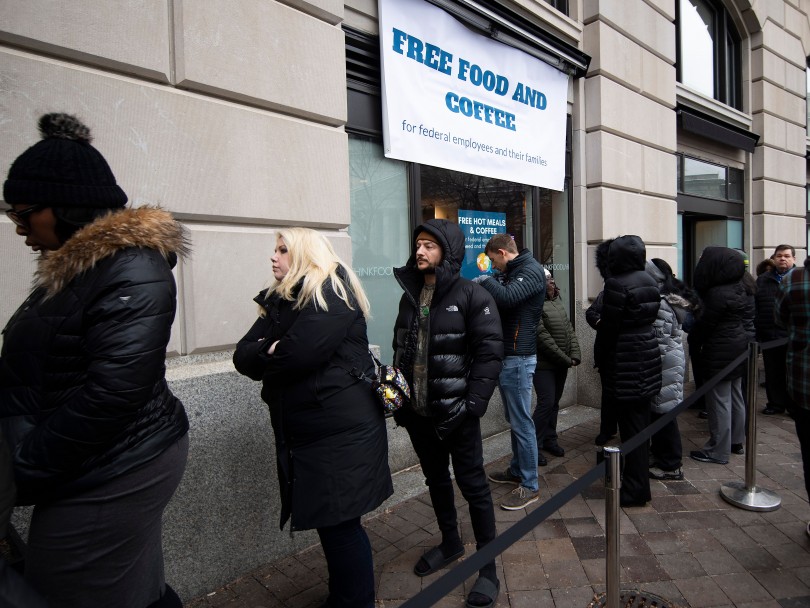 Out of the five-star soup kitchen on Wednesday morning came a woman named Monica with a quinoa salad and a bowl of chowder in a brown paper bag and tears streaming down her cheeks. It was Day 26 of the fractional shutdown of the United States government, and Monica was living ladle to ladle and weeping in public for her plight. “Awwww,” said a German radio reporter, and she consoled the sobbing hostage with a hug.

“People are being so good to me,” said Monica, turning on the waterworks again, and identifying herself as a clerk in the correctional agency that deals with sex offenders. “I get teared up every time.”

The bag lunch was being offered gratis to furloughed feds by a celebrity chef named José Andrés, out of a test kitchen and event space he runs in Washington. This was the same Spanish-born cocinero who had refused to operate one of his signature beaneries inside the Trump International Hotel, just down the street from the shutdown pop-up where hundreds of bureaucrats who had been reduced to mendicants were queueing in the January chill. Dozens of reporters and camera crews stalked each diner as he or she emerged. We would have followed them inside, but who ever heard of a professional journalist accepting a free meal?

“When Trump was running for president, he was pressuring Mexico to build and pay for the wall,” Monica said, composing herself. “But Mexico ain’t built no damn wall yet.”

“I don’t believe that it’s about the wall,” she replied. “It’s about control. It’s about demands. It’s about stubbornness. Everybody can be stubborn sometimes. Somebody has to blink.”

But on Day 26, all eyes in Washington still were wide open, or glued shut. Eighty-two per cent of Republican voters told a Pew Research Center survey that they favour a physical wall along the Mexican boundary. Six per cent of Democrats agreed. The contumely has barely gotten started.

“It is becoming more and more obvious that the Radical Democrats are a Party of open borders and crime. They want nothing to do with the major Humanitarian Crisis on our Southern Border. #2020!” tweeted the president, making it plain with his closing hashtag that the plight of the unpaid 800,000 really is little more than a re-election ploy.

A little later, somebody in the White House went on Wikipedia and helped The Donald tweet this:

“There are now 77 major or significant Walls built around the world, with 45 countries planning or building Walls. Over 800 miles of Walls have been built in Europe since only 2015. They have all been recognized as close to 100% successful. Stop the crime at our Southern Border!”

Overrun by the Manchu warriors who caravanned through the big, beautiful Great Wall of China in the 17th century, the Ming dynasty sovereigns might not agree, but the last thing that Donald Trump wants to be seen as is a Yellow Emperor.

“I don’t think Trump is going to blink,” a guide called Big Tony was saying at the U.S. Navy Memorial next door to the Andrés soupery. (Tony was, indeed, large.) “If anything, he’ll declare a national emergency and get his wall that way. There doesn’t seem to be any interest in compromise.

“We already have a wall,” Tony continued. “But yesterday I saw a video of people digging tunnels right under it. And there was a clip of Trump himself saying, ‘If you have a wall, people will always find a way to go through it, over it, under it, or around it.’”

“But he promised,” a reporter ventured. “Aren’t promises supposed to mean something?”

“Every president makes promises,” Big Tony answered. “But how many of them ever keep them?”

Exactly two years from this weekend, somebody is going to take the Oath of Office on the Capitol steps. But coming down those steps at noon on Wednesday were Cryin’ Chuck Schumer—he was dry-eyed for a change—and two dozen members of his Democratic senatorial caucus, and each of these solons was carrying a big placard, and on each placard was a photograph of an appealing white family posing in front of a lake or a mountain or a pair of golden retrievers, (plus one black man in a labour-union T-shirt and a premature baby hooked to an intravenous line in a neonatal ICU.)

So it still was all about victims and vaudeville on Day 26. House Speaker Nancy Pelosi made a big show of asking The Donald to forestall his State of the Union Address. The Secret Service fired back: “We’ll handle it.” The previous afternoon, grandstanding Dems had refused a parley in the White House Situation Room, lest they be blitzed by another presidential storm-out. And so on.

“I want President Trump to look into these faces,” throbbed Schumer, who is one federal employee still being paid. And he called the impasse “the Trump shutdown” for the eight hundred thousandth time, and Sen. Patty Murray of the State of Washington talked about “26 days of chaos.”

“Open the government,” half-heartedly chanted Chuck and his caucus-oids, whose ranks included exactly none of the party’s declared or probable 2020 pretenders, and then they all took their billboards and prudently went back indoors.

“What if Trump doesn’t blink?” a Maclean’s correspondent asked Sen. Tim Kaine, Democrat of Virginia, when the matinée performance was over. “Do you guys eventually have to give in to him?”

“I never gave a treat to my son to get him to stop hitting his brother,” Tim Kaine replied. And he proffered a reasonable-enough solution—a handshake to re-open the government for three weeks while various Congressional committees worke­d out a compromise on funding for the Mexican border before millions more future Democrats slipped in.

“How does this end?” Maclean’s asked of Rep. David Rouzer, Republican of North Carolina.

“My guess is it stretches on another couple of weeks, and then you’re going to start to see the Democrats fissuring” he estimated.

On the breadline, meanwhile, a furloughed employee named Jim Conroy from the Federal Aviation Administration was telling the pack of hacks that he and his family were “on the cusp,” and that they had “pushed some creditors back,” and “our landlord’s working with us,” but “we’re not at the stage that we’re starving,” and this was Day 26 of the Great Shutdown of 2018, 2019, and who knows what else.

“Planes will not be falling from the sky,” Jim Conroy comforted. “If we’re not getting paid, we should be at Air Traffic Zero, and there shouldn’t be any planes in the sky.”

“What would you say to Donald and Chuck and Nancy?” the accidental hobo was asked.

“Meet him in the middle,” Conroy replied. “Ramp up the one-point-three billion to two-point-six. This president needs something sweet in his beak, something he can take back to his lumpen. This whole thing is based on a whim. All he really wants is for history to say, “See that wall? That’s Donald Trump’s.’”