Image of the Week: For the first time, women occupied both key seats of power during a joint session of the United States Congress 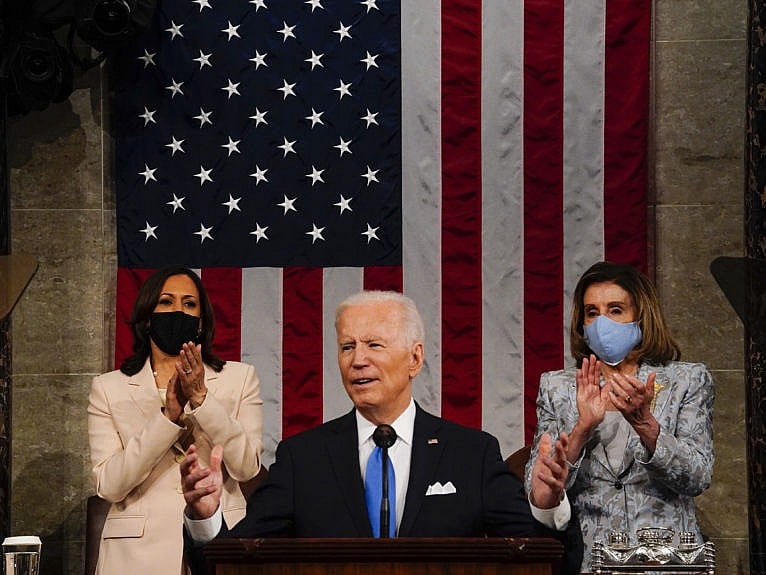 Harris and Pelosi occupying the dais during a joint session of Congress made for an American first. (Melina Mara/The Washington Post/Bloomberg /Getty Images)

Joe Biden’s first presidential speech to Congress was heavy on symbolism. The crowd was deliberately thinned for social distancing; the faces flanking him were covered by cloth masks. The president’s speech focused on uplifting but familiar generalities—hope over fear, millionaires paying their fair share, the benefits of big government, America in motion. But one symbol was novel, and impossible to ignore: two women, Vice President Kamala Harris and House Speaker Nancy Pelosi, sat on either side of the oldest man elected to the office. Pelosi has been a familiar feature of these speeches, noted for her meme-worthy  applause and acts of defiance. But this is the first time she’s sat next to another woman. This image—itself captured by a female photographer who wrote a book about female politicians—tells the story of a new normal in the United States, one with different standards and expectations. The number of women in Congress has grown steadily and consistently since the 1970s, reaching its current record of 144, comprising 27 per cent of the House. At this rate, the faces of Harris and Pelosi are more than just symbols—they’re part of a tangible movement that’s permanently changing American politics.