Allen Abel: He's no Louis XIV, but the reign of this president goes on—and what comes next may be worse 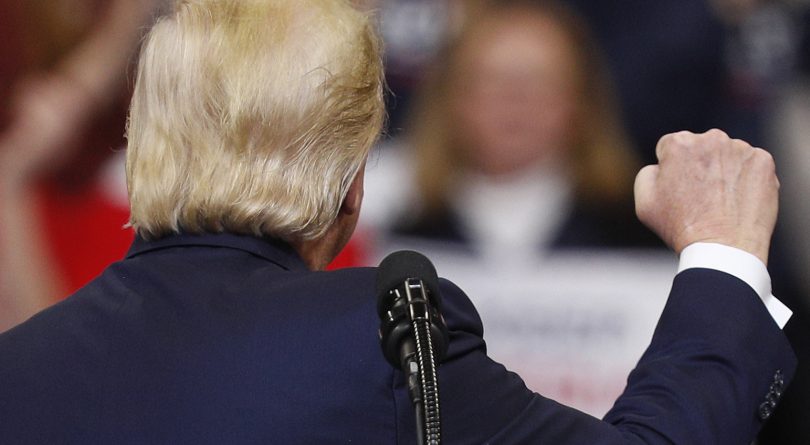 The Czar of the Deplorables remains the president of the United States, at least for Super Bowl weekend, but the impeachment trial of Donald Trump still was not formally finished at sunset in Washington on Friday, defying predictions that the Senate would wipe its hands of the whole grubby business in time for burgers and dilly-dilly on Sunday afternoon.

The partisan proceedings may not conclude until Wednesday afternoon, by which time Trump will have sprinkled the pixie dust of his annual address over the same Congress members who indicted him, and the arcane Iowa caucuses will have either clarified or muddled the campaign to select the poor pigeon who will oppose the indestructible New Yorker in November.

Hours of floor speeches will precede the final vote, allowing eight-balled Democrats to hiss and hate on the president, and the process on the Senate floor, for use in their re-election ads.

The czar, meanwhile, flew off to his palmy, beachy Florida hermitage on Friday afternoon, seemingly assured of vindication on charges of abuse and obstruction by half a hundred Republican senators, men and women who have mated themselves to the argument that even though he’s unfit, you must acquit.

A last-ditch Democratic motion to haul in brand-new, eleventh-hour witnesses—notably the radioactive warhawk John Bolton—failed in the Senate on a 51-49 vote at sunset. Republicans Susan Collins and Willard Romney voted with the Democrats, but the rest of Trump’s troupe held firm. More dum-dum shells from Bolton’s forthcoming tell-all had been launched on Friday morning—further detailing the president’s obsession with recruiting Ukraine’s young president to bring down Joe Biden and Son—but they did no damage.

Neither did 50-plus hours of sonorous damnation of Trump’s Ukraine tit-for-tat by seven Democratic “managers,” nor the Mad Hatter assertion by the president’s defence counsel that anything a national leader does to win re-election is by definition in the national interest. Almost every vote that will be cast for or against Donald Trump’s removal next midweek could have been predicted 40 months ago.

Barring a Hail Mary of a scandal before the final whistle, the impeachment of Donald John Trump has failed.

“I do not believe that additional witnesses are needed,” Rob Portman, Republican of Ohio, said in a written statement on Friday evening after the 51-49 landslide stifled the last Democratic gasp, summarizing the views of many members of the Grand Donald Party. “I do not believe that the president’s actions rise to the level of removing a duly-elected president from office and taking him off the ballot in the middle of an election.” 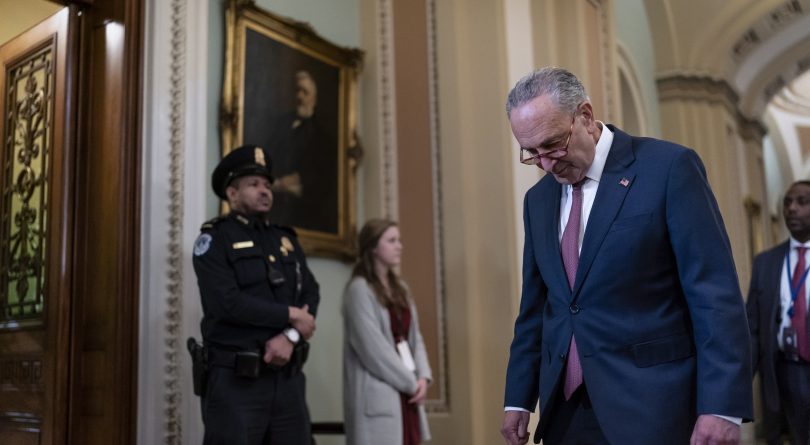 Chuck Schumer, D-N.Y., walks back to the chamber looking disconsolate after a break in the impeachment trial of Donald Trump (J. Scott Applewhite/AP/CP)

“The Constitution does not give the Senate the power to remove the president from office and ban him from this year’s ballot simply for actions that are inappropriate,” retiring Senator Lamar Alexander, Republican of Tennessee, had said similarly on Thursday night, proving beyond doubt that, after three years and a week of The Donald’s delirious administration, l’état, c’est Trump.

Now, they will. On Monday, the voters of lily-white Iowa will begin powwowing to decide which white man or woman will oppose Trump in November, to be followed by New Hampshire, South Carolina, Nevada, and the rest of the states in succession.  On Tuesday, Trump will deliver his constitutionally-mandated State of the Union address in the same House of Representatives that voted before Christmas to have him dragged away in chains for ignoring the Constitution.

Someday, Donald Trump will be merely a figment of history, as obscure as Millard Fillmore or Warren Harding. In 2040, if not earlier, Georgia legislator Stacey Abrams blatantly asserted on Friday, she—an African-American woman—will be living in the White House anyway, sneaking down the stairs at night to throw darts at the portrait of The Donald in the Grand Foyer.

But even before that happens, and regardless of whether the 45th president is re-elected this fall, the contest in 2024, between Alexandria Ocasio-Cortez and Donald Trump, Jr. will make America’s current politics of paralysis and poison appear as soothing as hot, milky cocoa. If Donald Trump’s impeachment is, in a way, the final stanza of the Bill and Hillary Clinton years, then the last card of a man whom Ohio Democrat Sherrod Brown calls “unhinged, vengeful, and angry” has yet to be played.

RELATED: The Trump book you didn’t hear about but is the most devastating yet

“He will think that he can do it again,” Democratic leader Chuck Schumer told reporters before Friday’s dénouement, “and Congress can do nothing about it.”

“This is perfidy,” an enraged Schumer ripped after Friday’s gavel, as impotent as a mule to change the outcome.

“Trials by juries are the heart and lungs, the mainspring and the centre wheel of liberty,” Rep. Adam Schiff pleaded Friday in his—and his party’s—last attempt to haul in John Bolton to destroy Donald Trump, quoting John Adams, the second U.S. president.

“Without them,” Adams had said, “the body must die, the watch must run down, the government must become arbitrary.“

“All of the facts will come out,” Adam Schiff was saying now, quoting no one but himself. “In all of the horrors, they will come out.”

“He’s a vengeful man,” said Sherrod Brown of the president. “He will be unhinged.”