Daily Trump Tracker: The president delivers a lecture in Brussels as the White House staff try to limit his tweeting, and his predecessor tours Berlin 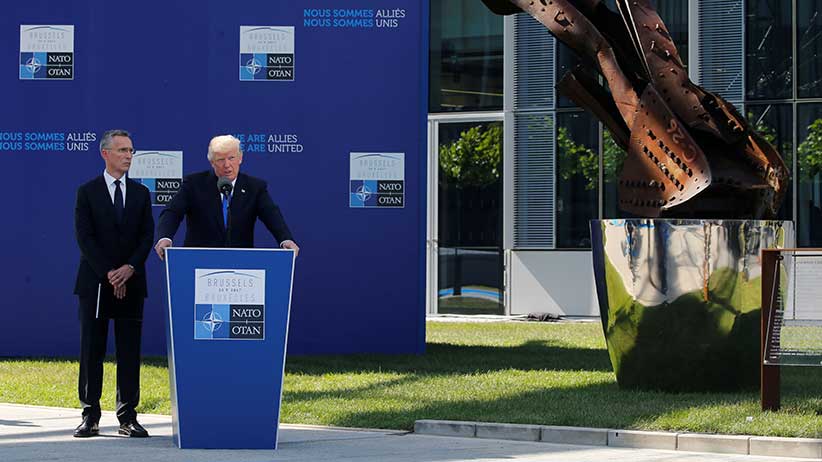 U.S. President Donald Trump speaks beside NATO Secretary General Jens Stoltenberg at the start of the NATO summit at their new headquarters in Brussels, Belgium, May 25, 2017. (Jonathan Earnest/Reuters)

I’ve got you right where I want you
It turns out Donald Trump came to Brussels to lecture NATO, not to praise it. The president used his turn at the collective security group’s bully pulpit to tongue-lash the members who are behind on their payments. The world leaders he was dressing down responded by murmuring and smirking among themselves. The first day of the NATO conference also provided plenty of opportunities to observe the schoolyard tactics of presidents and prime ministers.

#nevertweet
If the president has been feeling a little overscheduled of late, it’s by design. White House aides are reportedly heeding the Proverbs and limiting Trump’s free time, in an effort to keep him from watching his fave show, Fox & Friends, or thumbing out tweets.

Who’s telling tales?
Details about British law enforcement’s investigation into the terrorist attack in Manchester were let slip this week, prompting Prime Minister Theresa May to remind her U.S. counterpart about the importance of keeping secrets, well, secret. Trump today called the leak “deeply troubling” and called for a review by the Department of Justice and other agencies involved.

Remember the name
Greg Gianforte, that is, who was charged with assault after body-slamming a reporter on the campaign trail. He’s also the Republican candidate for Montana’s seat in the House of Representatives, in a by-election that was being treated as a pulse-taking for next year’s mid-term congressional vote. Were Gianforte to win despite his WWE homage, there’s no telling whether Donald “I could stand in the middle of 5th Ave. and shoot somebody, and I wouldn’t lose any voters” Trump will be emboldened to test the limits of his own support.

A study in contrast
While Trump laps up the glares in Brussels, his predecessor is hanging out in Berlin. President Barack Obama’s in-real-life subtweeting of 45 is as much about simply being himself while the Donald is himself as actively criticizing and opposing. But there’s the odd pointed statement, as well. “In this new world we live in, we can’t isolate ourselves. We can’t hide behind a wall,” Obama said today.