Kamala Harris combined assertiveness and ease, but both she and Mike Pence wriggled out of key questions. It was all so blessedly normal. 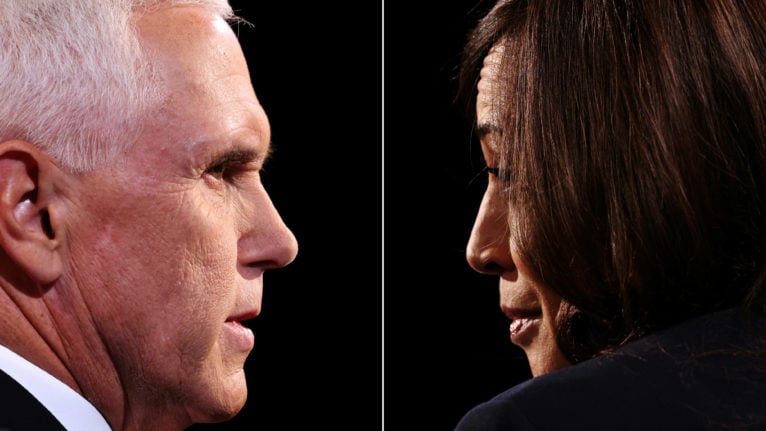 It was a debate so earnest, so conventional, so calm that you could almost hear a fly land. Or you could certainly fixate on that and nothing but for a while. The tedious cat-and-mouse game Mike Pence tried to play with Kamala Harris on a supposed fracking ban and tax hikes? It reminded you of the tedium of normal presidential and vice-presidential debates—oh, how we’ve missed it over the last eight years.

But there was more than cat, mice and flies during a 90-minute exchange that actually felt substantial. A few impressions:

What was the best the vice-president could do, when both his contender and moderator Susan Page repeatedly thrust into his face the jarring tally of 210,000 dead Americans, and other blunders of the last eight terrible months as the crisis unfolded in the U.S.? Highlight the leaky, ineffective ban on travel from China; thank the American people for their sacrifices; quibble that Joe Biden’s campaign has plagiarized no-brainer plans to swiftly distribute a vaccine and focus on testing; hearken back to the far less deadly swine flu pandemic of 11 years ago.

America’s disproportionate share of the world’s coronavirus death toll seems to have no rational excuse, and Pence made that plain. His insistence that the apparent superspreader event where Trump introduced his Supreme Court nominee was fine because it was outdoors, and his invocation of “freedom!” were flaccid. Pence is the head of the White House coronavirus task force, yet was helpless to safeguard the White House itself from the virus that will whip through a cluster of people when they gather with so little caution.

Meanwhile, Trump has moved past even trying to excuse things and is now claiming the antibody cocktail he received in hospital is some kind of cure. At least Pence didn’t go there?

Questions left unanswered stand out more than ones that are answered

This was chronic, on both sides. Each of these canny, experienced rhetoricians tried to wriggle out of corners and give only the responses they wanted, and it was glaring. Pence repeatedly declined to explain how the Trump administration will support Americans with pre-existing conditions while simultaneously trying to eradicate the Obamacare plan that created those protections, then dodged saying how he’d comport himself if Trump refused to accept an election loss.

Harris was in most cases more direct, but she conspicuously refused to explain her stance on the Green New Deal—which Biden more forcefully said he opposed amid last week’s cacophony. Same went for a question on whether a Biden-Harris administration would add more judges to a conservative-tilted U.S. Supreme Court—”packing” the bench. Her evasions may wind up sticking in the campaign more than Pence’s, because Pence strenuously tried to highlight them. The Trump campaign will likely do the same.

Pence can only carry water for Trump so far

Mike Pence doesn’t really get “spirited” about much, certainly not in the way we’ve seen other Republicans get in always-amped-past-11 Trump era. Before his nearly two decades in politics, he was a radio talk-show host who called himself “Rush Limbaugh on decaf.” He may now be best described as “Donald Trump on some cocktail of Ritalin, Valium, under-steeped green tea and a nine-year Bible school intensive.”

He can’t defend Trump in a Trumpish way, and sometimes he seems to be half-heartedly fighting for his boss; take the segment on the president’s own taxes, where he passively cited Trump’s complaint that the New York Times exposé was phony rather than punching back himself; and when it came to lambasting Biden as a career politician, Pence referred to Biden’s “47 years in public service,” which has a nice and generous ring to it.

Mike Pence doesn’t echo Trump in saying he wouldn’t accept the results of a fair election, but instead he filibusters and faintly echoes his boss on vague insinuations of mail-in voter fraud. And on a last question about civility in politics, he didn’t even bring up Donald Trump, while Harris pumped up Biden. That was a significant tell.

Kamala Harris introduced herself, wielding a shiv with a smile

Other than her moments of inartful dodging, Democrats will likely be delighted by their VP nominee’s performance. She was constantly measured, she was determined to refrain from interrupting, yet she can wage an attack much more masterfully than Biden can. Her swipes at the “incompetence” and “ineptitude” of the Trump White House on coronavirus conveyed bafflement and condemnation. “This administration has forfeited their right to reelection based on this,” Harris said.

Pence may have tried to bait her with a few interruptions and gotcha moments. But someone who is Black and female in U.S. politics will have learned long ago that the American voting public has double standards when it comes to anyone who is not a white male expressing anger. She played it cool, while her rival at times seemed petulant in wanting more time to get in more digs and rehearsed lines.

All eyes were on 2024, or someday sooner

With two septuagenarians vying for the presidency, and coronavirus striking one of those senior citizens, this was a veep debate like none before: voters must size up the qualities of a candidate who will sit one collapsed lung away from the presidency. Before the debate, Republican stalwart Rick Santorum said on CNN that this was effectively a presidency rehearsal for Pence.

What did we see? Mike Pence looks, as ever, like the consummate Country Club Republican or the conventionally bland movie president—as opposed to his boss, who without a word of lie almost played Sharknado 3’s commander-in-chief, until November 2016 intervened. A mildly saner, if not more doctrinaire, version of Trumpified Republicanism awaits if he takes over. Or when he runs in 2024.

Harris, too, acted with presidential swagger, confidence and poise. She took the time to highlight her experience in California and on key Senate committees. And while she constantly praised Biden, she subtly struck out as her own politician, with a shrewd analysis of Black injustice and cagier answers on climate change than Biden has offered.

The moderator asked if either had had discussions about a transition of power. Neither answered.