Allen Abel in Washington: It really was the best of times and the worst of times for the U.S. president on Tuesday 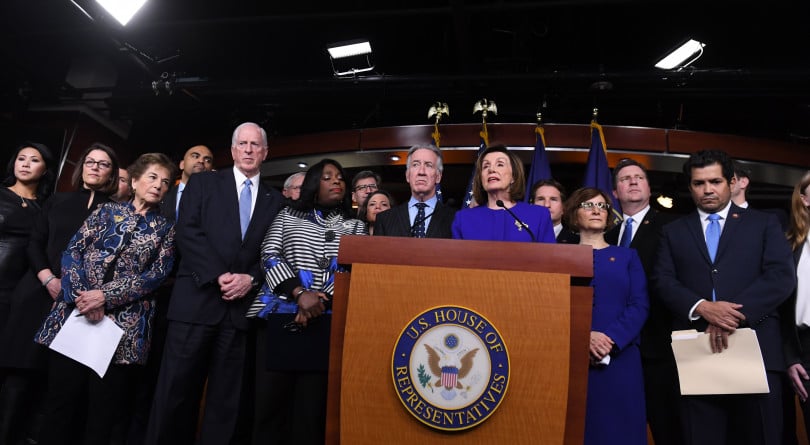 “I want you to do us a favour,” said Donald Trump, and Nancy Pelosi complied on Tuesday, finally releasing the parking brake from a revised North American Free Trade Agreement and giving the president a glut of gloat-able, quotable material to use on the re-election trail about what an Artful Dealer he is.

Announcement of the replacement for what Trump often has called “the worst trade deal in the history of the world” came on the same morning of the same day that the same Madame Speaker – using the word “solemn” twice in her first sentence – announced the two specific, alleged “high crimes” for which the president will be tried and quickly acquitted by his cowed Republican allies in the U.S. Senate next month.

During any other presidency, such a contradiction would be considered dizzily discombobulating, but this is Trump. Adding to the vertigo, the president capped this bestest awfulest day by gaggling in the Oval Office with Sergei Victorovich Lavrov, the amiable foreign minister of Russia, which got America into this mess in the first place.

Trump then flew to swing-state Pennsylvania for a rally with the deplored.

READ MORE: What will happen if Trump is convicted in an impeachment proceeding

Known to the White House as the “US-Mexico-Canada Agreement” and the most significant legislative achievement of Trump’s presidency since his trillion-dollar tax cuts of Christmas, 2017, the tri-national treaty will impact the continent’s factories and farms long after Trump has passed from the scene, be it by a hostile Senate vote or defeat at the totally-rigged ballot boxes. Most of its last-second amendments relate to the enforcement of labour standards in Mexican factories.

“It could be perishable,” Pelosi told reporters at the Capitol Tuesday morning, explaining why she chose to move USMCA at the same hour that she has been labelling the president “a clear and present danger” to the survival of the republic.

That it was the “deranged Democrats” who actually forged the final rewrite of the new-NAFTA, colluding with union groups to get the Mexican government to agree to a quid pro quo of freer trade in exchange for higher wages and tighter environmental and enforcement causes, is unlikely to be a feature of Trump’s stump speech between now and November. The only clause that he is likely to invoke is himself as Santa, once again squeezing his bulk down the national chimney with jobs, jobs, jobs.

Meanwhile, the president blithely romped along the rim of constitutional death Tuesday, tweeting that his life-long nemesis, House Judiciary Committee Chairman Jerrold Nadler “just said that I ‘pressured Ukraine to interfere in our 2020 Election.’ Ridiculous, and he knows that is not true. Both the President & Foreign Minister of Ukraine said, many times, that there ‘WAS NO PRESSURE.’ Nadler and the Dems know this, but refuse to acknowledge!”

“To do nothing would make us complicit,” said Adam Schiff, another of the Democratic Congressmen who forever will be linked in American’s minds with the president’s (unsuccessful) prosecution. Failing to remove Trump now, Schiff said, would be like asking, “why don’t you let him cheat in one more election?”

One surprise in the formal Articles of Impeachment was the omission of any reference to Robert Mueller’s long, expensive, and ultimately irrelevant investigation of the Trump campaign’s camaraderie with Vladimir Putin. In fact, the charges devolve entirely from Trump’s telephone conversation of July 25 with Volodymyr Zelensky, the television humourist who just had been elected president of Ukraine.

Article I contends that Trump “ignored and injured the interests of the Nation” when, “Using the powers of his high office, President Trump solicited the interference of a foreign government, Ukraine, in the 2020 United States Presidential election. He did so through a scheme or course of conduct that included soliciting the Government of Ukraine to publicly announce investigations that would benefit his reelection, harm the election prospects of a political opponent, and influence the 2020 United States Presidential election to his advantage.”

Article II determines that “Donald J. Trump has directed the unprecedented, categorical, and indiscriminate defiance of subpoenas issued by the House of Representatives pursuant to its sole Power of Impeachment. President Trump has abused the powers of the Presidency in a manner offensive to, and subversive of, the Constitution.”

The Democrat-controlled House of Representatives will pass the Articles next week, even though as many as 10 of the Speaker’s own minions from districts that Trump won in 2016 reportedly have been quietly urging a vote on a less-vituperative resolution of censure, rather than impeachment and expulsion. Either way, sometime early in the New Year, the president should be able to declare that he has swept a doubleheader—a failed witch hunt in the lid-lifter, and NAFTA 2.0 in the nightcap.

“People ask me, ‘Why make it look like he has a victory?’” Pelosi pondered at her free-trade news conference Tuesday morning, having swapped her mask of tragedy for a happy face. “We have a victory for the American worker.”

“We are celebrating today,” Pelosi was insisting, moments after standing with a half-dozen committee chairmen who were dressed, and acting, about as celebratory as a mortician with a toothache and a repossessed car.

Republicans, meanwhile, were foundering in the whirlpool, trying to spin new NAFTA as “a major win for America,” in the words of Rep. Kevin Brady, while defaming the Democrats at the same instant.

“They’ve been abusing the power of impeachment,” agreed Steve Scalise, Republican of Louisiana. “That’s the real abuse of power.”

“This is a day that we’ve all been working for,” Nancy Pelosi countered, writing Donald trump’s stump speech for him. “There is no question that this trade agreement is better than NAFTA.”